Did anyone else catch it? As a Star Wars lover since I first saw it as a kid in '77 this episode reinforced why I love it so. Made me cry and squeal with glee all at the same time. Can’t wait for next season!

I didn’t like it, it is out of sync with the timeline in my opinion

What new season he dont have anything to do now that would matter the kid is gone . I also and thrown off on what the timeline this is happening.

The Mandalorian takes place 5 years after the Return of the Jedi; I feel that it is not too far out of place in the timeline regarding the end of the last episode of Season 2. Also, there’s a lot of potential for more material revolving around the retaking of Mandalore which feels like the next direction with the inclusion of Bo-Katan.

I agree with Ryukan, I think the Mandalore theme may have been the plan from the start. 2 seasons to introduce the main character to the story then the child can come in at a real key point in the retaking and save everyone at a point of hopelessness. This feels like the big picture ideas of the original movies to me. Could be wrong but I am very hopeful of recapturing some of the wonder the original movies gave a 10 year old boy when they started.

Also anyone now doing the math to figure out how very old I am is just being mean, lol.

The finale was AMAZING and exactly what I hoped it would be. I cried a little. I am 49 so I have been watching Star Wars since the beginning and this tied up a lot of lose ends and set a path for a great future! As far as Grogu, well he really stole the show for the first two season, but the title is “The Mandalorian” and I do look forward to the future of the series. There will be many cross overs with the new Disney + Star Wars explosion!

My 10 yo LOVES Grogu. When he was taken in the penultimate episode, he actually almost cried. So the finale was even harder for him.

I think a couple things are certain:

And yes, I sit here and type this while covered up with a Baby Yoda blanket, have two figures, a Funko Pop and even the Baby Yoda Chia pet and listening to my kids play with a talking Baby Yoda too. So there may be some bias present!

Rogue One and A New Hope happens in 0-BBY (Before the Battle of Yavin).

3- ABY - The Empire Strikes Back

The Mandalorian begins in 9-ABY. It’s the only way I can put things in context.

Bias? Noooooooo hehe. When Grogu first appeared in the show I was a little off put at first as it kind of came off as a merchandising stunt to me, Baby Yoda everywhere. I was expecting some Ewok level cutesy crap that would drive me nuts or something Jar Jar Binks cringey. But as season one progressed and the show got better and better I came to like the relationship that developed between Din and Grogu. I disagree somewhat on your first point though, I think Disney knew they had a merchandising hit on their hands and I’m wagering they had a good idea that Baby Yoda was going to be popular.

Your second point is a good one; I can see them doing a spin off. Heck they almost have to with people wanting more Grogu.

The name Grogu however instantlymakes me think of the character Rogu from the animated show American Dad. 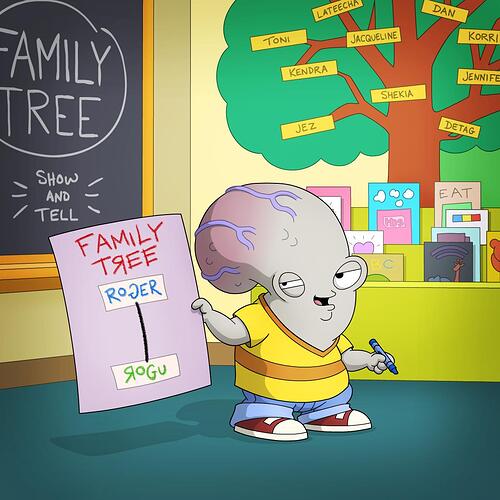 According Favreau, Lucas made the decision to keep Baby Yoda a secret. I think Lucas knew.

I agree though. I saw visions of green Ewoks or mini Jar-Jar’s. Thankfully it was not that.

I was 9 when it came out lol… yup feeling the age lol… BUT that was the Luke Skywalker that Star Wars fans have been waiting to see … not the joke we saw in The Force Awakens Trilogy… I was all for the ending of the Skywalker Saga… but i have to admit, now i am intrigued by the potential they can unleash after The Mandalorian finale… like the Jedi Academy Books… for a long time I have been meh about Star Wars… pretty much since they categorized the novels between Legend and Cannon… Disney has a wealth of source material potential here to use… here is hoping they use at least some of it

I was in high school, but I was a fan of Star Trek way prior to Star Wars, and while Star Wars is an epic tale of good vs evil, Star Trek IMHO is better science fiction, exploring different cultures and ideas about right and wrong. Not that I don’t like Star Wars.

Did you watch after the credit on the last episode?

When the season two finale of The Mandalorian dropped last week, it teased something called The Book of Boba Fett in a post-credits scene. It was clear that Boba Fett was going to get some time in the spotlight, we didn’t know if this was a movie, a...

Had chills when I saw Boba in his armor after it had been repainted etc. Stoked for this.

I had no idea that Luke would show up, felt the small hairs rise on the back of my neck as soon as I saw the green saber… What an ending!

For the record I was 18 years old and in the Army when A New Hope hit the big screen! Like most, here… I saw it more than I care to admit.

I wonder if Luke is gonna be put off if he discovers how many living beings Grogu has eaten alive.