Some of those medical masks are not that easy on folks with breathing issues and its a shame that driver did not realize that problem and have an alternative slightly lighter mask to help alleviate that problem for you.

The somewhat good news is the ambulance driver gave me a mask that is thicker and harder to breathe through so the level of difficulty I was having in the hospital was way less when I took it off at home.

I am glad you are starting to feel better and so glad you had been vaxed and boosted or your situation could have been worse. My son has a slight asthma issue as well which I found out about shortly after he got sick (never thought to tell me about it before

) but he actually used his breathing techniques learned through his judo sport, which helped alleviate much of his breathing issue. He had respiratory issues caused by a virus he contracted as a toddler called histoplasmosis. I got him involved in Judo when he was about 10 or 12 yrs of age to help improve his health because the training regimen employed concentrated on breathing to boost control and concentration in the sport.

Anyway, to the point that might be of help in regulating your asthma here is a video that might provide some pointers in helping to improve your over all breathing situation.

Yes but i didnt notice. It affected my gf more.

The differently shaped white mask stops all covid variants the regular mask does not.

I was vaxed 5 of tyhem i hsve copd it barely affected me if my Carol didnt get tested at work i would have never known to check.

We use those KN95 masks instead of those blue cloth ones. I’ve been using these for almost the entire period of covid, except when my son brought the Omicron version home with him just before Thanksgiving last year. I don’t think he wore a mask while DMing that table top game and so I’m almost positive that is where he caught it.

The differently shaped white mask stops all covid variants the regular mask does not.

I have had it a few times and have been vaxed from the beginning. It does make the effects much less. The infussion which I had the first time works great as well.

That being said, I’d like to request that further responses in this thread be directly related to the OP’s current situation and what he can expect moving forward. i.e. what helps with various symptoms, how long will it last, etc.

To further clarify what I think was clear enough: We’ll be enforcing this.

Another reminder of the above. We would like to be able to keep this thread open.

anyway, the sickness effects vary in people, as illustrated by my wife and myself. she still says that its affected her sense of taste and smell. she says that she can detect a chemical odor and taste to a lot of common things now that she can’t stand. my infant niece had caught it, was very sick but recovered, and the doctor says that she appears to have lost some of her hearing range due to it. there’s a lot of stuff that isn’t understood yet about the long term effects of covid. last I heard, there are studies showing long lasting cardiac effects in a lot of the recovered.

try to get enough sleep. eat well and hydrate yourself even if you don’t have an appetite and try not to stress. that’s what you can do about it. gl and stay safe.

yup, I can confirm my appetite which wasn’t great, to begin with, took a big hit though part of that is the Ozempec.

ahh yes the odor. about a year ago I opened up a bad bag of coffee and the nasty burnt smell permeated my apartment for hours. It was so bad I thought I had covid as people describe it as a burnt smell. Even called my doc in panic…lol anyway the smell cleared and my panic went away.

You are correct in that the covid virus affects folks differently. When my son caught it, we believe it was from someone who espoused to only have a cold. However, he really got sick quickly and it lasted at least 5-7 days before he even felt like himself again.

I picked it up from him probably in the first 24 hours after he started showing symptoms and I felt like I had a bad flu without the upchucking. Neither of us really experienced the massive respiratory issues we hear about. Which leads us to think we caught the latest, lighter version that was called Omicron.

I plan to get my next booster here shortly and will opt for that newer one that recently came out that seems to be able to protect against more than one version. I mask up no matter where I’m going.

Also, the last person who gave me a bad time for masking probably doesn’t want to see my face again after I offered to let him catch my cold if he wanted me to unmask. He recoiled in horror to my delight. Of course as I was 10 days past my illness, I still had a stuffy nose, for which my doc prescribed Fluticasone Propionate Nasal Spray (aka Flonase) because my allergies had kicked up at the same time. (I was guilty of a white lie but I get irritated when folks ignore science)

hehehehe…its amazing how folks react if you say you have a cold or even sneeze around them.

Hang in there… I’m sending you mojo. The good kind that is!

My wife has asthma. Spent much of her childhood/early teens in the hospital. It can be pretty bad though these days more treatable of course. Hope it gets better and fast!

So, is the special mask oval, square, round, or triangular. This is important to me. 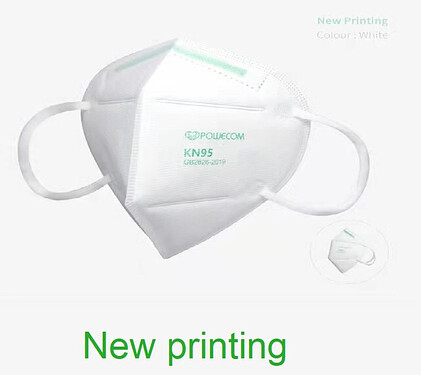 The ones my son and I use look like this. They have a nose bar that can be squeezed to fit on the top and the mask itself is firm enough you feel like you are wearing a soft cup. It is not restrictive breathing wise and I have used them for some hours at a time whenever I have gone into the grocery store, doctor’s office and other public places.

I’m getting ready to replenish our package since we have about a dozen left now. But do your research before purchasing if the source is unknown to you. The government has a webpage that offers information to help prevent purchasing a knock off (which is unfortunately out there).

just did my day 10 rapid test and it said I am covid negative.

10 days after a covid positive result in the hospital, the droplet precaution isolation will drop without a patient even being retested unless you’re showing obvious signs or symptoms of infection, like productive coughing, shortness of breath, and/or fever. I believe that’s per the cdc guidelines that most hospitals follow. for peace of mind tho, it is nice to be re-tested since most people will ask if you retested and give you the side eye if you just tell them that you should be ok after 10 days.

I’m glad to hear you are recovering.

We lost my brother just before Christmas after he caught pneumonia following Covid. By the time my sister-in-law made him to go to the ER whether he wanted to or not, his heart had apparently enlarged and he collapsed shortly after being admitted.

sorry for your loss.