Can a clan commander or deputy commander register us for participation in naval battles please.

If someone doesn’t get to it before I get home tonight I will do so.

Everyone come play and get some OIL!!

When I checked last night it looks like someone else had already gotten it. I saw a score (82), a ranking, and no obvious way to turn it on.

Hey guys, how can we do better in the weekly Naval Battles?

The main discussion for the weekly clan Naval Battles is over in the other thread, https://forums.oldtimersguild.com/t/clan-battles/13950

I’m not sure what you’re asking, what are your concerns? We’ve been more active lately, and until the matchmaker catches on and puts us in harder matches, we’ve had the high score lately.

The key, as I see it, since each person only has 10 attempts available to them, is to grab the initial easy stars in the categories, then have those who are more proficient, and have high tier ships, work on the resulting higher threshold stars.

When there were three of us mainly doing the Naval Battles, I’d try to grab what I comfortably could on Friday, as the novice with a limited roster of lower tiered ships, then @thesuperles and AngelsOmega would come along later and grab the higher threshold stars, as well as categories that they had ships for where I did not, such as aircraft carriers. I’d return on Sunday and blow my remaining attempts on stars that might be within my reach that were remaining.

Works for me, I have been going in on Friday and Sat mornings, going for Cruisers as first priority, then BB and DD as I am not good at DD at all.
WoWs : Dtodd33
LOTRO : Sir_Douglas (aka Bofor)

Of course, the main thing is to have fun, the rewards are not so lucrative as to stress over … as we say in OTG, “Laid back, not too serious, no drama … all about the fun!”

Another week and another win, Nice to see additional clan mates playing now. Are we close to expanding our Naval Base buildings again?
I would like to see an increase in the academy since it is soo tough to increase your captain skills

Participation does seem to be higher, and while the rewards are not lucrative enough to stress over, good to see more OTG folks enjoying the weekend option for clan Naval Battles participation. Hopefully the matchmaker will continue to be kind to us.

I’m thinking that while the PvE “Co-operative Battle” mode is not a good fit for “base XP” Clan Naval Battle weeks, it seems to work out well for “ribbons” and “damage” weeks.

Looks like this week is a “damage” week, glad to see can pivot to the Co-op Battle mode this weekend, for some relaxed PvE fun … of course, the bots die fast to the team so I suspect the potential may be higher in PvP Random Battles?

BTW, who’s in charge of what our Earl is going towards? I’ve gotten the notice that new unlocks are available but never picked one since I’m not an official occifer of the chapter.

A couple of us have used the oil for bonuses that “make sense” for the group in general. Shooting to finish up the Shipbuilding Yard and the Academy next. Drydock after that.

Looks like this week is another “damage” week … I prefer “ribbons” and “damage” weeks for the clan Naval Battles, they seem a good fit for my preferred Co-op Battle mode of relaxed PvE fun.

Last week was a “damage” week, the matchmaker served us up an active opponent, but we did well on our weekend’s categories. 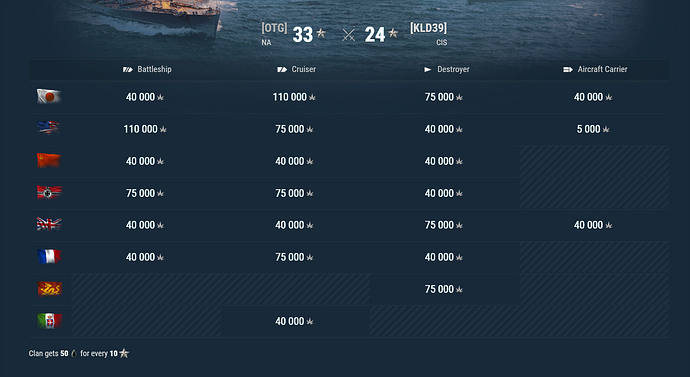 It appears we’ve got another “damage” week, yet again.

The matchmaker is not messing around, we got a Draw for our Super Bowl weekend clan Naval Battles result: 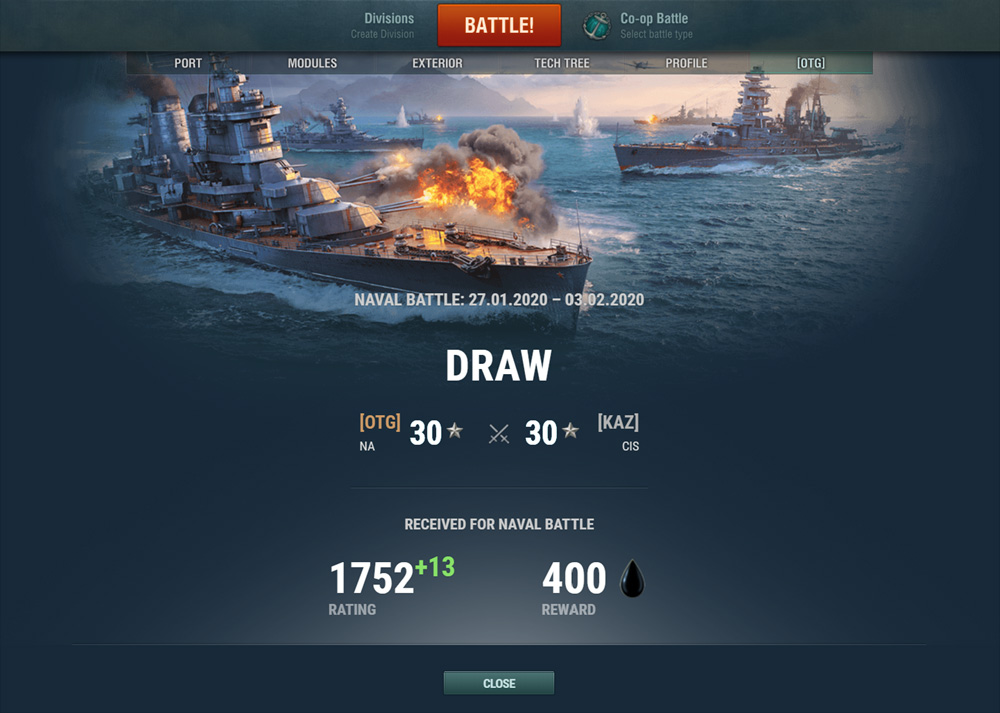 Sorry guys, my prem, time ran out and after the PR fiasco I couldn’t keep going and rewarding WeeGee with continued patronage.

No worries, Greyed, the rewards are not lucrative enough to stress over, and as we say in OTG, “Laid back, not too serious, no drama … all about the fun!”

Besides, it’s inevitable that the matchmaker will put is into matches where we will lose, if the matchmaker is doing its job, if you were active and participating it would just be with a higher clan rating.

I agree that Wargaming as a company has revealed themselves as trying to follow EA’s level of greed, but as a free-to-play game it’s going to be harder for them to prey on those of us who enjoy Warships, IMO.

I’m not amused with the “Research Bureau” approach to putting more stuff behind a crazy grind, removing “Legendary” modules from the previous approach and now putting them behind that grind is their latest stunt, and, after the Puerto Rico fiasco, strikes me as perhaps more of the same.

I was tempted to consider purchasing the Wukong with the wacky camo which I thought looked kinda nifty, but after their way they’ve been behaving I kept my wallet closed.

Apologies gang. Was playing subs too much this weekend and forgot about my Naval Battles. I’ll do better this week.