My character's backstory for AoA (long)

Just as she had the previous Sunday and every Sunday prior to that for the previous 89 weeks, Anna carried a basket of fresh meat and baubles up the mountain to give to her friend. The narrow trail across the ridgeline was loose with gravel and the occasional viper also made the way treacherous but she was confident in her step. Indeed, the faroff vistas that she could see here just below the snowline comforted her. “Ir, jiil, fogah… fogah, jiil, ir.” Soon I’ll be safe in the steep cliffs, she thought to her herself.

The counting had taken her a lot longer than usual but shortly before nightfall she found her way to the cave beneath the old giants’ fortress. Her friend Enix, was not waiting there for her as he always was. The old man’s smile, half concealed by his long flowing hair was always a joy to her. Nobody else in the world understood her. Where was he?

Anna sat down on the promontory outside the cave and began unpacking the basket to create a meal for her friend. On one side she spread out a cloth blanket and plates with the meat and on the other she drew a flawless circle. She then unpacked the polished quartz baubles and let them fall one by one from her fingertips into the circle. Chaos constrained by order. And even the chaos was precise in a way that only a probalist could appreciate. The baubles weren’t valuable but for some reason he loved them and the game they played together was a foolish children’s game but it always made him happy for some reason. Anna lived to see his smile and earn his praise.

It was getting late. The moon was well into its ascent over the valley below and still no Enix. Where are you? The delay was starting to worry her. Anna’s eyelids began to flutter. Three beats. Two beats. One beat…. One beat, two beats, three beats. Over and over.

Suddenly a voice thundered across the mountainside. “STOP!”

“Wha… wha…” she whimpered. The voice was terrifying. The force of it shook every bone in her body and turned her insides into jelly.

“THE THING YOU ARE DOING WITH YOUR EYELIDS! STOP DOING IT!”

She was physically trembling now.

The awful weight of those words filled a pit deep in her belly. Anna had never seen Enix’s true form but this was unmistakably his voice. Magnified thousands of times until the mere sound of it could shatter a city’s walls. Anna stood up and picked up her walking stick. “Mitne!” The command illuminated it with a soft white glow.

Anna approached the threshold of the cave cautiously. Three beats, two beats… No! What am I doing? Have to stop! She collected herself before pressing further into the cave. There was a sickening smell of burning flesh. She could hear his breathing, but it wasn’t as she had imagined it. It was labored… forced.

Then as she rounded a corner into a vast gallery she saw him. Tears came to her eyes immediately and she suppressed a gasp with a reflexive movement of her hand to cover her mouth.

If one can imagine the greatest person in the entire world, beaten, scarred, and brutalized into an unrecognizable pulp, then that might approach a hundredth of the injury she found him in. What must’ve been the most beautiful face in existence was now a charred and bloody ruin. Her friend, the one person she loved more than anyone. The one person who understood her, who was like a father to her, had been robbed not only of his life but of what made him who he was. The wounds had been made not just to harm, but to deface, degrade, and desecrate.

“I’m sorry the first time you really saw me was like this.”

All decorum and deference fled from her and she rushed to his side to comfort him. “Who did this to you?”

“We will heal you. I will find a priest in the village.”

“Yes! There must be someone. If I go now I can bring help in time. We can…”

“Stop. Listen to me, Anna. You must listen.”

Anna pressed her face against his cheek and tried to wrap her arms around his mighty jaw.

“Your rituals are getting worse.”

“You would’ve died. Listen to me.” The tears flowed like silver streams from her eyes. Enix continued to speak. “You have to find friends.”

“Yes you do. You must. You need friends who are different from you.”

“Everyone is different from me.”

“That’s not what I meant! And I demand you stop this self pity. You’re not that different from everyone else.” Enix paused to catch his breath. “I watched you create the circle, and the meal. It’s all beautiful but it’s too perfect. These rituals will be the end of you.”

“But you are perfect.”

“Is that what you think?”

Anna nodded quietly, still pressing her head against the wreckage of Enix’s cheek.

“Did I ever tell you about Arvax? He was a copper. A great warrior and a greater friend. He was the only person who could ever make me laugh. One time he… “ Enix chuckled as if about to tell an amusing story but instead coughed releasing great gouts of blood from his mouth. He was still for a few moments and then said “Go find friends, Anna Winter. Friends who can balance you. Go find friends.”

And with that the mighty silver dragon Enix died in Anna’s arms. She closed his eyes and gathered the food and marbles from outside to place them before him. Perhaps in the afterlife he could enjoy these gifts one more time. She then kneeled and said a prayer to Apsu, asking him to grant favor to her departed friend and thanking him for the precious moments they had shared - all the lessons she had learned of the dragons, their history, and their culture. She doubted that she would ever find a friend like Enix again. But she would try. 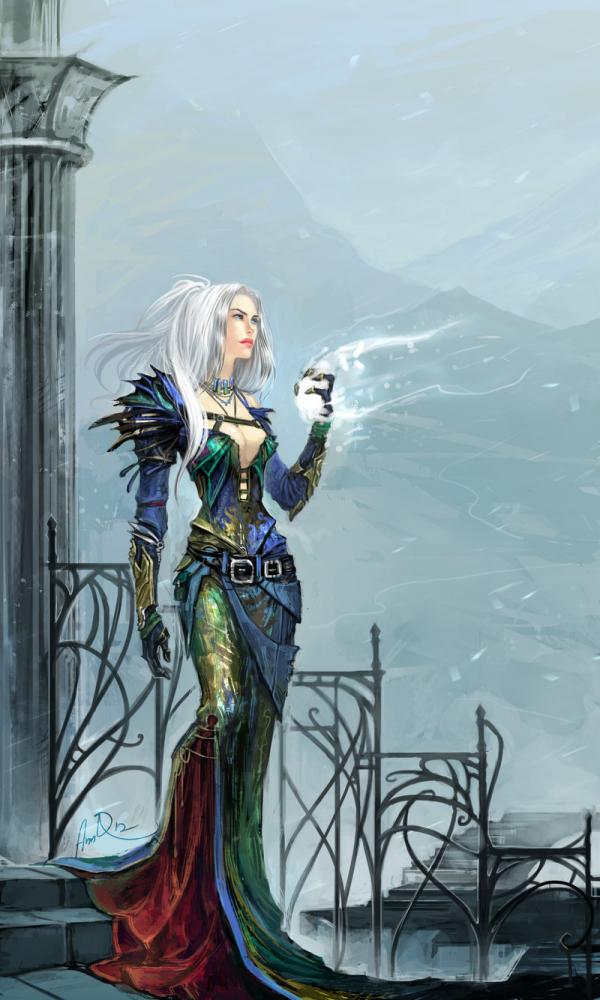 PS - The picture is by this artist. The draconic words are from this page. The backstory is by me

WOW!!! That’s all I can say about your backstory. No, it’s incredible. So glad I happened upon this community. Thank you for sharing. You are truly talented. If you ever write a book, let me know.