Lucked Out Ya Weirdo's

This is so weird, I know we are supposedly the ass backward ones but this time it’s definitely you guys being backward.

Lucked Out!
You guys in America take this to mean you got lucky.
We Aussies take it to mean exactly what it says, luck has run out hence unlucky if you lucked out.

I see this said in books written by Americans and it’s so freaking strange.

I’m curious what it means in the UK and elsewhere in English speaking cultures.

@Alphea what about Scotland can you enlighten me please?

I agree. Sounds backwards to me.

Every culture has its colloquialisms, even you aussies from ‘down unda.’ So…welcome to weird!

Which one is weird for you?

Oh and where are you from Neph?

Depending on the type of luck you are refering to, i.e. good or bad, this phrase either implies a positive or negative statement. It implies that you recieved as much luck as was possible whether it be good or bad, aka you rode your luck untill it...

When I hear that phrase I always take to mean I’ve gotten lucky and managed to accomplished or gotten something I perhaps should not have. So to me its a positive phrase.

The first sounds weird to me. I’m Canadian.

I grew up and live in the US. The American version implies to me that luck has allowed me to escape a negative situation, as in “luck got me out”. I didn’t pray myself out, I didn’t work my way out, I lucked out… even if what I got out of was “the norm” when luck gave me something special that most people wouldn’t have gotten.

Growing up in New Jersey, everyone in the greater New York City area was grumpy, distrusting, angry, belligerent, and suspicious. Everyone lived a tedious life of overwhelm, distrust and dissatisfaction. Luck was what allowed one to get out of that oppressive tedium. In that context, “lucked out” can make a lot of sense as something positive. “I lucked out (of the run-around rat race) and found the perfect parking spot.” Hope that helps, Safari.

I just find it interesting that it has an opposite meaning depending on where you grew up. Should I call it a United States or Americanism (LoL love that word I just made up a USAism) mainly because it seems an opposite for @Neph in Canada too.

Another opposite word Fanny LoL truly for the USA it’s your bottom for Australia it’s the front part only females have you know the VaJayJay. USA say Fanny Pack we call it a Bum Bag. I suppose Fanny Pack could still work here in a marketing sense because people do tend to wear them facing forward for security of the contents within the pack, but then the men here would think they are for women only.

Do you think it’s partly because USA wanted to be individuals and step away from tradition and decided to be absolutely opposite in as many things as possible?

I went on a two week work trip to Australia a couple decades back, flew in right around Chinese New Year and Australia Day so there was a lot going on.(and it also meant it was over 100 degrees in the shade…or I guess that over 38 to you Celsius folks - and yes we hang on to that because Americans are even defiant about their units of measurement!!!) Online I found quite long lists of terms and American phrases to be careful of and not saying anything about ‘putting napkins in your fanny pack’ was among the top ones to avoid.

Growing up in New Jersey, everyone in the greater New York City area was grumpy, distrusting, angry, belligerent, and suspicious. Everyone lived a tedious life of overwhelm, distrust and dissatisfaction.

And they take that with them wherever they move! I live in North Carolina now and when a customer calls in with a hard NY accent I inwardly grimace, this is going to be another difficult one.

I think America just made it up as the went along when the settlers first invaded what became known as America the level of literacy was far less than it is now. Spellings were changed and some words too.

Some words just never made sense of course like the English popular food of Faggots became a slang term for something else.

Faggots are meatballs made from minced off-cuts and offal, especially pork (traditionally pig’s heart, liver, and fatty belly meat or bacon) together with herbs for flavouring and sometimes added bread crumbs. It is a traditional dish in the United Kingdom

The English language contains some 300000 words most are never used , A good vocabulary might be 30k or so an English graduate may be in the region of 65k so most words are archaic . New words are also added every year as the language is still constantly evolving. There are also lots of regional differences, Scotland for instance has its own version of English and many words that are only really used here. Glaikit – Stupid, slow on the uptake Drookit – Soaking wet They say that in Gaelic there are 23 words for the type of rain (not a surprise) but not English of course

Don’t forget Numpty, that’s a fave of mine.

Oh and I’ve seen faggots mentioned in a novel. She explained what they were in the book. But I’m not a fan of offal so I don’t think I’d ever purposefully eat them.

And we also used to call cigarettes ‘fags’ they even made candy versions with the same name but years later they got changed to Fads and they took away the red tip so they didn’t resemble cigarettes any more because they believe it encourages kids to start smoking.

As for the nickname fag for a smoke that also phased out because of political correctness.

Edited to add some pictures 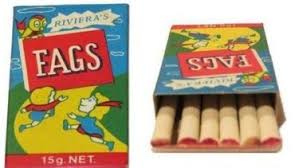 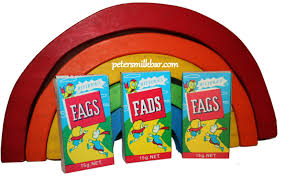 Ooh I found an article on the change 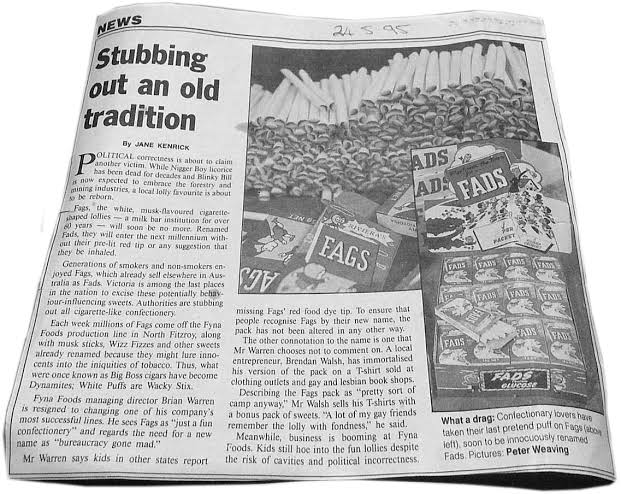 Oh and don’t forget stories in English Literature or History Philosophy classes. When I was in H.S. we had an amazing English teacher who wanted us to look into how language changed over the centuries. So she introduced us to old English versions of plays. One I remember for its odd spellings is Thomas Dekker.

Thomas Dekker (c. 1572 – 25 August 1632) was an English Elizabethan dramatist and pamphleteer, a versatile and prolific writer, whose career spanned several decades and brought him into contact with many of the period’s most famous dramatists.
Thomas Dekker (writer) - Wikipedia

But my favorite by far was Beowulf. The wikipedia gives some very good background. This ‘poem blends fictional, legendary and historic elements’ and we had several weeks working on this in class. To this day I remember it as being the most informative about how language was used to tell stories where many were translated from oral recitation to the written word. Beowulf (/ˈbeɪəwʊlf/; Old English: Bēowulf [ˈbeːowuɫf]) is an Old English epic poem in the tradition of Germanic heroic legend consisting of 3,182 alliterative lines. It is one of the most important and most often translated works of Old English literature. The date of composition is a matter of contention among scholars; the only certain dating is for the manuscript, which was produced between 975 and 1025. Scholars call the anonymous author the "Beowulf poet". The story is set in paga Sch...

So yea, language is absolutely amazing and can be so different between regions, not to mention areas within the same city. Dialects are what we also discussed and as I remember, you can have so many different dialects within the same community depending upon the makeup of the citizenry of that city.

Well considering that everything on the other side of the equator is opposite, i.e. toilet flushes it kinda makes sense.

Lucked out to me means that you’ve become very lucky! Seems to be opposite to all of you. But then, I grew up in South Wales, UK so my weirdness can get odd. Hey Safari! Happy birthday, hun! Hope your day has been a good one! Figure you’re sleeping now

Lots of hugs from Taff!

I just remembered that Incy Wincy Spider was changed too. You cheeky RatBag’s that’s sacrilege.

I have lucked out of a bad situation many times.

I have lucked out of a good situation many times.

I declare a tie.

Okay I have another bizarre question that I can’t make sense of and I think it’s another USAism.

What are baseball leather seats (found in trucks and cars) and how do they differ from regular leather car or truck seats? I’ve asked google and it couldn’t find an answer.

I love your signature Chamir. It totally rocks