Since @Ryukan and @Rando have been discussing Starfinder lately that has also made me think about it and I went and bought a couple of the pdfs and I’ve been pondering a few character ideas.

For better or worse, I’m very fond of the Warhammer 40k universe. And since Starfinder has a lot of the same races like elves and what not it seems like it should be possible to obtain a rough equivalent in Starfinder for some of the characters in Warhammer 40k that interest me.

One such are the Harlequins. They’re like basically poet-warriors of the elven (Eldar or Aeldari in 40k) race who re-enact crucial events from their peoples’ history to preserve their memory and culture. I am not sure if such a character would be better suited as an Operative, a Solider (perhaps of the hit and run variety) or an Envoy.

They also have this amazing weapon which I don’t know if it has a Starfinder equivalent or not, but it sure is awesome!

A Harlequin's Kiss (called the brathu-angau in the Aeldari Lexicon, literally "kiss of doom"), also sometimes called a Sting, is one of the more horrifying close combat weapons employed by the Aeldari, and is used only by Harlequins. Arguably the...

For other character ideas I also thought of an Arcane Assailant soldier as a possible equivalent for an Eldar Banshee and a Blitz soldier for the equivalent of a Dark Eldar wych.

Are you sure yer not putting the cart before the horse?

I’ve barely skimmed the rules, but I did do a deep dive into the lore chapter of the CRB (Ch 12), and was about to dive into the Pact Worlds book before I got so rudely interrupted by The Expanse.

Whatever inspires you is well - inspiring, but every time I’ve tried to recreate characters from movies, books, and videogames in my PnP RPGs I’ve been left frustrated. In the past that’s usually mean’t I could try and jury-rig my character out of whatever multiclass rules were available in the system we were playing. Both the Pathfinder2e and Starfinder systems, however, are (currently?) pretty hostile to multiclassing. sad panda face

I guess what I’m saying is. Find out what the lore supports in game right now. Then try and make a character that fits that lore.

In any event, we have no idea what sort of adventure/campaign/module/path Ryu is planning on running…

And all of the above being said.

I’ve currently got concepts for:

The envoy story could be used for a soldier or even a solarian or something. I don’t know enough about the solarion yet to comment.

Sadly I haven’t come up with anything I like for a technomancer or witchwarper yet.

I won’t ever be playing a mystic, vanguard, biohacker, or mechanic.

P.S. It goes without saying that all above concepts are of hot female humans who I can model in either Skyrim or Fallout 4, duh

Well, elf is listed as an additional playable race in the back of the Core Rulebook so that’s a start at least. I can easily imagine this character as being either a soldier, operative, or envoy. Perhaps having the icon theme.

Funnily enough, I think my list of preferred vs non preferred classes is almost the same as your own. I’m having trouble thinking of any ideas for any of the magical caster classes.

Good grief you guys are already conspiring to have me searching through every page to handle your crazy—errr I mean interesting and unique ideas.

For the record, the first module I am planning on running is Dead Suns. I’m just slowly buying all the stuff for the adventure and the additional resources for extra races and gear and stuff.

I’m not totally convinced y’all haven’t entered into some secret pact with Fantasy Grounds to get me to buy all the things.

I’m on to you…I think…well maybe…or maybe not. Off to buy more Starfinder stuff .

See, you could all be thoughtful potential players and only pick races out of the handbook so I wouldn’t have to buy all the overly-expensive Alien Archives from Fantasy Grounds…but I know you are too dead set on playing weird things to be difficult

I wouldn’t want to limit you to vanilla Starfinder races and break your poor little hearts. But dayum those Alien Archives are $40 each, gonna wait for another sale before I get any of those.

So far I have the Corebook and the first two parts of the Dead Suns adventure. I might pick up the Armory next week if I have enough extra disposable monies (should have). This is not the time of the year that I can splurge on stuff, that comes July through November so I am acquiring all the things for Starfinder in Fantasy Grounds piecemeal as my budget allows.

But at any rate I still have a good deal of time to spend figuring out running adventures in Fantasy Grounds. I’ll probably be ready to run Starfinder in early to late spring. Plenty of time for prospective players to read up on Starfinder so we all have less to learn. I figure I might end becoming a (the resident?) Starfinder DM who always DM’s and never gets to play hehe. Or maybe I could make my own character and play in the group while I DM and make my character super awesome and call him Captain Kickass like some jackass DM…

<-- only plays humans; doin their part to be helpful

I ended up buying the Lost Omen’s World Guide for Fantasy Grounds, and honestly it was a waste of money. The only thing I really needed to run the campaign was the CRB. I’ve bought 4 of the 6 Age of Ashes modules in FG (and have all 6 of em in PDF form from Paizo). That’s just time saving. I might not even buy the remaining two and just enter them buy hand.

The Paizo PDF modules have stat-blocks for all of the monsters they introduce, but reference the Bestiary (which I also have in PDF) for stat blocks of monsters from that volume. The Fantasy Ground modules have stat blocks for everything that they reference, so no Bestiary necessary, which is very handy - considering there is no Fantasy Grounds Bestiary module yet. Same goes for magic items, all the ones referenced in the Age of Ashes modules are built into the FG modules (or could easily be entered by hand.)

I’m not sure if there’s going to be a Gamemastery Guide module for Fantasy Grounds; if there is, I probably won’t get it. The only things from that that we’ll need in Fantasy Grounds would be magic items, and I can enter the ones we use by hand (cause everything not crafted by you guys is already in the Age of Ashes modules.)

If - and that’s a huge if - I had to run Starfinder, I would make my purchases like so:

I don’t know if Character Operations Manual (for Starfinder) or Advanced Player’s Guide (for Pathfinder2e) are coming to Fantasy Grounds; if they are I’d get them. They contain a lot of shit I wouldn’t want to enter buy hand (like new character classes.)

P.S. you can link your Paizo account with your Fantasy Grounds account (on the FG website) and gives you a discount on FG modules you buy that you’ve already bought from Paizo

So I went looking for a Dead Suns players guide, and apparently Paizo hasn’t made a single player’s guide for any of the Starfinder APs (yet?) but they did make 2 min trailer videos!

@Rando Yeah there’s not really any kind of comparable player’s guide in the actual Dead Suns modules,. There are some player reference resources, but it’s up to the DM to bring the players up to speed. There are some story resources in the module that the DM can share prior to the adventure in say a session 0 or whatever to set things up. There’s a new race called Ferran introduced in the adventure module that seems to be a cross between a dwarf and a halfling.

In the previous big post you keep mentioning the lazy factor, well waddya know that is definitely me. If I can just buy it rather than make it all from scratch…yeah I’m gonna do that most likely. I definitely don’t feel like making up the whole adventure module from scratch lol. A race here and there and some items, yeah that I could do. But I will be deep into DMing the D&D Ghosts of Saltmarsh module for friends in roll20 by that time and I’m not gonna wanna make up much of anything in Starfinder, just gimme the stuff to buy hehe. By the time I start the actual Dead Suns adventure in Fantasy Grounds I will have acquired all the Starfinder resources in FG I need. I have not bought one thing in Paizo yet because I have just been looking over all the book pdfs on The Trove site. So I can dump some money into Starfinder resources through FG and I won’t have spent anymore than I do on gaming and music in a 3 or 4 month period.

Also I need plenty of time to pick your brain on how it works DMing Pathfinder in FG…I mean no, I most certainly not assault you with questions at some point.

@Mithinar innoncent eh? That’s what they all say! I have to read up on my Starfinder law and legality…we’ll see about that…

Might want to retain Ocelot’s character Anna from Pathfinder for legal representation. Just cryogenically freeze her in Pathfinder and thaw her out centuries upon centuries later in Starfinder.

So @Rando, you lightly touched upon running your own Starfinder game someday here. So that got me thinking about what character I would play in your campaign. I’m torn between anything a serious type character and or a definitely goof ass themed character.
So there’s:

A) Anything Vlaka (Wolfman race from Alien Archive 2) because this race appeals to me way too much. This would be a more serious character.

B) I would play one of these dinguses and play him like a cross between Jar Jar Binks, Barney and Scooby Doo with a voice that is a mix of Mushmouth from Fat Albert and the Gang and Dopey Dog. 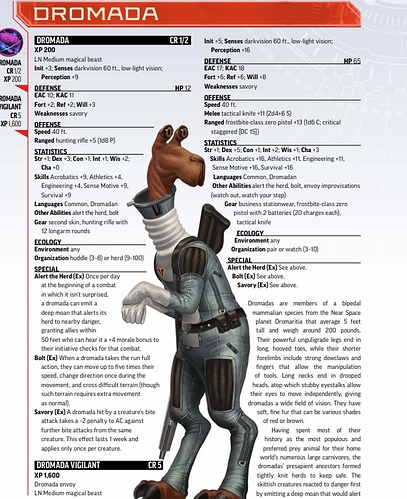 It is kind of a cute little critter

Ohhhh I wouldn’t go so far as to do the slapstick goofball crap that Jar Jar Binks did, it would play off his more naive and bumbling nature. That race is called the Dromada and they are basically alien camel cows. They have a flight over fight and herd-like tendencies to the point where one of their racial abilities is a loud moaning call that signals danger. They also run away really well and if they get bitten by something they take an AC penalty to getting bitten by the same thing…for a week.

But yeah I’m pretty set on the Vlaka.

@Ryukan, ooh the AC penalty sounds tough. I guess they have an ability that compensates?

In any case I was completely kidding in my comments above - even about Jar Jar. (I’m not sure if it was clear or not.)

@Rando. have to say I would like to play something akin to a crazy Wych elf (a-la warhammer 40k).

Ohhhhh no hehe, the Dromada have no associated way to compensate for that AC debuff. The racial trait is called Savory, so the Dromada taste good and make a creature want to take another bite really bad. I guess by way of compensating they can run away really well like Scooby Doo.