Launching today! I know some people are waiting until it is no longer an Epic exclusive but my son spent the summer playing the other games in the series and are so excited about this game, I pre-ordered two copies.

Just wondering who else is playing at (or shortly after) launch.

Please don’t post Epic Games rants in this thread, thank you. Just looking for other B3 players.

My Epic Games ID is RanterX. Please post yours and I will add them here.

I bought it and plan to play I am also playing WoW Classic so will be splitting my time between them I was not a fan of Borderlands 2 but some friends talked me into getting Borderlands 3 and giving it a honest try .

What is your EPIC (so epic) ID?

I’m already on your friends list for both steam and epic ( OTGtpsabre ).

Shotguns I’ve seen so far either have a shield in zoom mode (some of which bounce shots back at enemies) or ricochet bullets!

My son was excited about sliding (I guess because of Apex Legends) but the climbing is the um fo shizzle or whatever as far as I am concerned.

I love the instant reloading of ammo at the vending machines too… and many other things I can’t think of because I am at work just wanting to play the game right now!

… about ammo … open a box/chest … walk over ammo and it’s just picked up. alot of the time in BL 2 I would have to hit “e” to pick it up. or that’s what I believe I remember.

fyi : there was a utube video about 5 minutes long of “quality of life” changes. From that video I learned if I open the map I can click on my car (if I have one) , a fast transit station , and I thought a “zone” line and I’m transported there. No more running all the way back.

anyways … now I’m in love with shotguns. that knock down / knock back is awesome. I shot a round into a charging bandit square in the chest causing him to fly backwards over a railing. hahaha

My EPIC name is WildfiresOTG …

I’ll be grabbing B3 as soon as I finish Tales from the Borderlands to make sure I am fully up to date on the overarching storyline.

anyways … now I’m in love with shotguns. that knock down / knock back is awesome . I shot a round into a charging bandit square in the chest causing him to fly backwards over a railing. hahaha

Aim for the legs and knocks enemies down… then go to town on them.

I finish Tales from the Borderlands

Gahhh, I hope they bring this back to steam soon, I’m ready to grab a g2a key at this point. lol

Love the TRON look. My Moze is rocking Vladoff Red und Gray topping it off with a furry bubushka hat.

ps: I love how the barrels (smgs, rifles) glow red hot and “cook” with smoke after sustained fire.

My Moze is rocking Vladoff Red und Gray topping it off with a furry bubushka hat.

Tried Mayhem mode under Social. I began at level 16, one player was level 50, left +5 levels, 3mil credits, 2 uniques, and a selection of new firearms to choose from.

It was nuts. Constant running, gunning, dying, and reviving team mates. My amateur suggestion/tips is : bring a Full Auto weapon , Full Auto Fire / cold / acid worked well to me. I had a SMG Dahl FAuto Fire element in my inventory I used 95% through the event.

At the end last mob was glitched under the ground and the creator (the level 50) pulled the plug cancelling the Mayhem event.

When you die you spawn back up top, you can load up on ammunition at the vending machine. The Mayhem event took about 40-50 minutes FYI. Not something to start and finish, at least at this point in the player community, in “15” minutes.

I was a little nervous about joining a social game esp. with my level 12 - 15 weapons but … no one complained as far as I can tell. I wasn’t running with a Head Set so maybe the other 3 people were cusing me out lol but it all went smooth.

OH, I bought ALOT of SDU’s when the event ended. lol 3 million credits normal play through on a lvl 16 (now 22) character.

Holy cow… thought that was endgame… think my solo (FL4K of course) just hit 23 (after killing the damn warden, sheesh what a fight) and my co-op (Moze) is 18. Will give it a try. Thanks!

anyways … now I’m in love with shotguns. that knock down / knock back is awesome . I shot a round into a charging bandit square in the chest causing him to fly backwards over a railing. hahaha

Shotguns in previous Borderlands games could be great weapons to use, but even some of the better shotguns in the game didn’t feel satisfying in a fight. They were loud and did a lot of damage, sure, but they didn’t feel like powerful cannons of...

Oh about the neon look, I didn’t include my mech but your skins also affect your “pets” so the mech as well as the pets when I play FL4K (who has the same skin) both have the neon effect as well. Not sure if it affects Zane’s Drone (yet).

I like keeping all the equipment with funny quotes on them but they ate up all my bank. Made a new character to hold them and free up space. @tpsabre found my skin choice with the Marcus Bobble head a little frightening so spent some Eridium and “fixed” it. 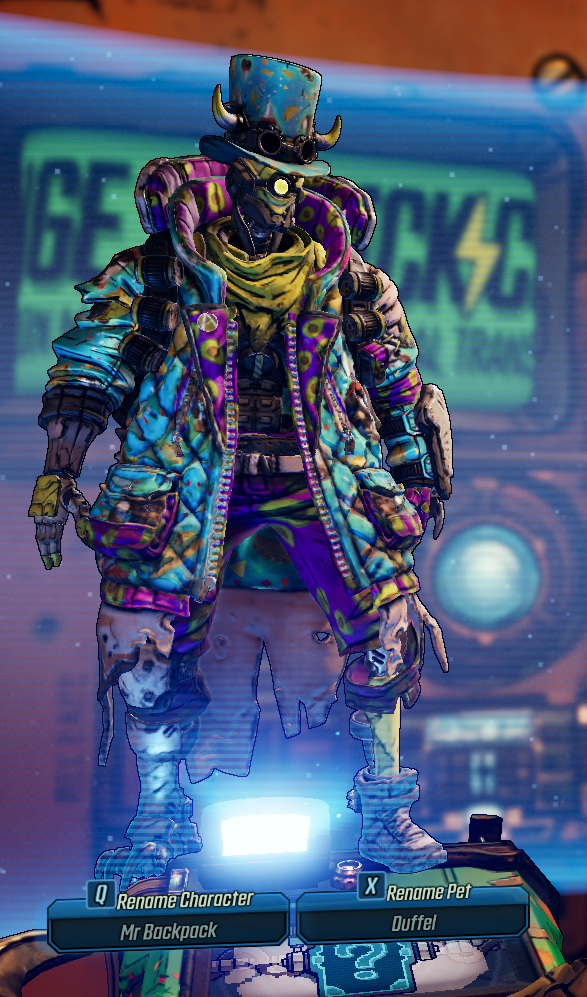 It looks even “better” with his pet since it got the skin too! 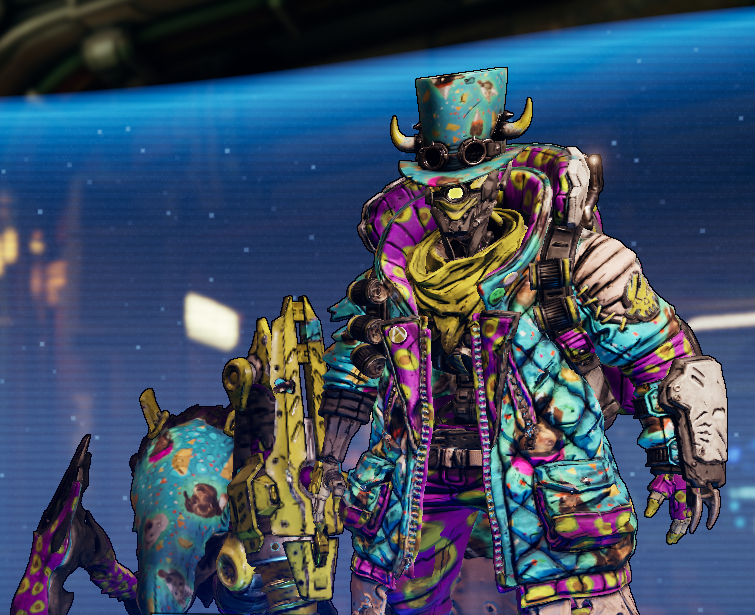 I like to keep some weapons be it legendary or not. Like the first gun I pickup. Otherwise if the legendary, if it’s below lvl cap, doesn’t fit whatever style I usually just vendor it. Once I hit cap I’ll begin hoarding them. Looks like the cap on the bank is 50 items?

Think so. Only just realized you can mount one of each type of gun/gear in each character’s room too so doing that for class specific high level stuff I want to save for them. Saves a bit more room.