(removed this info so there’s no confusion) …

And Atlas OTG information can be found here: (Base location, invites, etc)
https://forums.oldtimersguild.com/t/captains-logs/11541/4?u=terra

7 posts were split to a new topic: Captain’s Logs

Glad you were able to join us Darknstormy!

For those that weren’t online this morning, there were 2 NPC pirate ships that sailed around the zone going island to island blowing up other guilds bases and ships making a mess of everything. Armageddon!

They made their way to our guild base, but thankfully a few of the guys were online and quickly started to pickaxe underneath the pirate ships and sunk them before they did major damage (some of the guild boats sustained damage and were sunk, but the bulk of the base survived and everyone sleeping inside the base is still fine). We don’t have cannons yet so GREAT JOB GUYS with the picks sinking the pirate invaders!!!

While this morning yielded no more resources on our island I did manage to find, once I got past the snoring blockade, 3 bottles along the shore. Each glowing a different color. All had a treasure map in side! Shortly after, Memory Dump and Lilrich came on and we decided to take a sloop out for treasure. Along the way we noticed something bobbing in the water as we sailed… Flotsam! or floating loot. We took turns braving the cold water, sharks, jellyfish and eels to get this new loot. Each one had some gold coins, a song that could be learned, some food and a blueprint of various qualities.
This continued for a while with a return to port to deposit our treasure before heading back out. Much of the same on the way to our buried treasure island, with one point dodging glowing green ships of the damned firing at us while Lilrich deftly maneuvered to avoid the giant water spouts.
After an hour or so we came upon the island. I had just mentioned that I picture undead coming up when I dug, and lo and behold, that is what happened. Undead sailors came up to defend their booty. After several false starts we were able to dispatch two waves (and get about 6 levels each doing it) the chest had 80 gold and several higher quality blueprints in for each of us. We safely made it back and then things went south… but that’s another tale.

As far as tips. Unlock bow, make one and shoot things. You get XP from hits. Lots of leveling done this way.

There is a small group of us on Hydra Den at F11. Feel free to drop by some time and I will introduce you to The Valley of Death (from the observation areas and not in the valley itself of course): 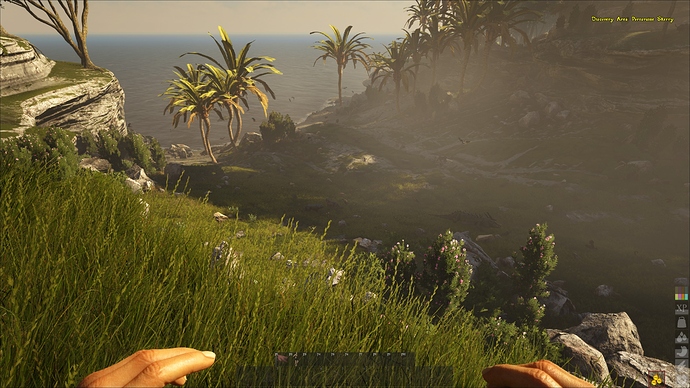 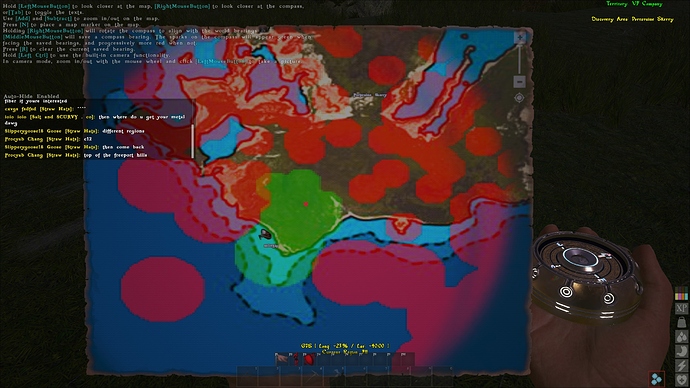 Excellent! We’ll have to meet up so that we can form an alliance to make quick travel easy.

If it works like in ARK, alliances won’t let you actually do anything, just see others in a different colours.

No sharing of beds or dinos.

Trox, we now have an alliance setup. So if any of your F11 folks ever sail over to K-11 to the NW corner of Cornlants Haven island or run into any of us we can share the alliance love. We are very active on Discord #Atlas text channel and Discord voice at the very bottom. Hope to see you guys!

Hey , So for a while there I couldn’t even get back on to my character and at one point my home server , M7 , wasn’t even listed. Today I was finally able to get back my character but my raft , which had every on it , was gone and I’m in L7…yay? At least I got him back.

Couldn’t find K 11 on the map. But I did manage to join the Discord server.

I would like an invite to the company if I can ever find the island you are all on.

Ok…I guess I’m in the main OTG Discord channel. I guess I need access to #Atlas? I’m not seeing it.

The Discord text channel is under GAME DEVELOPMENT header in Discord, then click on #Atlas. That lets you read all the daily chaos while still voice chatting

We are thinking of getting the sloop going tomorrow and going on a bit of an adventure; maybe we’ll swing by your way. Our company is called VF Company. Took us a bit to find a good source of metal on our island, and even after finding it takes a bit to get to it using both grapple hooks and climbing picks, but love both of those features. Hoping not to run into the plethora of Ghosts Ships out there lol.

LAND AVAILABLE IN K-14!!! (rough area with the animal spawns, but…)

HaplessChimp found some abandoned unclaimed land in K-14, plenty left to claim! It’s damn cold here, and there’s no fiber so it will need imported, but still doable if anyone wants to noodle around with claims or building. Lots of stuff will kill you here. Cold, wolves, vultures, giant ants… but, still entertaining.

He managed to get us 3 beds down to fast travel to (thank you, hope they last overnight!).

Your F1 key opens up the flag placement option, just run around until you find an open spot outside of existing green claimed circles. Then it just takes 10 mins and it’s all yours since it’s currently unclaimed land.

Update 1: Thank you Chimp for giving us more beds to spawn on! One is much more safe on top of a cliff.

Update 2: We placed some additional claim flags more inland to help secure resource areas that will not be built on. Not sure if this deadly area will blossom into anything since it is a rough place to live, but it’s at least something to try for amusement. There are other guilds to the very north, east, and south so try to stick to the western side.

I placed a few extra western flags down on the beach area to secure us more land in case other guilds make landfall, so if anyone is interested in trying a rougher area feel free to build on any plot that doesn’t already have a foundation on it (once you move in I can unclaim the temp flag I put down for you at anytime if you wish to put your personal flag down in its place so that it feels more like “home”).

This is NOT a good starter place for people that are new to the game or hate dying since it’s cold with hard hitting animals and lacking fiber which means you can’t build foundations without importing it, but is a fun spot to at least noodle around a bit or for those who like a survival challenge. Fast travel on over to one of the beds and check it out! Enjoy! 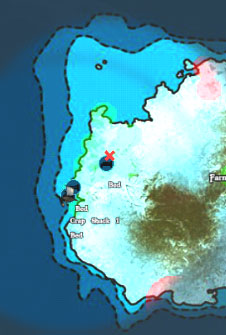 Another shortcut for in-game guild chat is / (forwardslash)

Did they patch that? Was working randomly the other day for me. TY will try again

It’s the default clan shortcut, like INS is for local chat. Problem is that you have to type it every time you want to say something in that channel.

In Ark, did they ever make it so you could hide or move the chat box? Would love that in Atlas

Can’t do anything with it, not even in mods. It’s a built in of UE, just like the god awful RCON font.