I see we’ve now got Clan Missions in World of Warships, for our OTG Clan, to include Clan Battles:

Clan Battles Season 13, Tears of the Desert, starts next week, with Tier X ships in a 7 vs. 7 format.

I have three Tier X ships, will be happy to participate, altho I primarily do the PvE missions so am fine if there are more accomplished PvP’ers who want to do the Clan Battles. 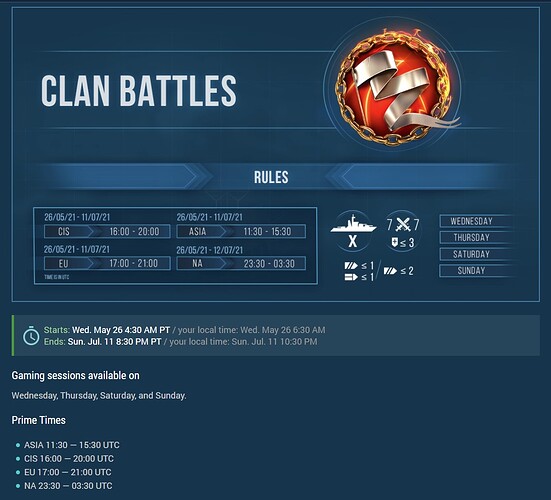 Oh, and here are the temporary ships that are provided as options, each week, as shown on their web page:

I had StatsBloke’s stream on the second monitor, he was asked if he thought the Gearing would be a good DD to take for the upcoming Clan Battles, to which he replied along the lines of “The best destroyer to bring to the upcoming Clan Battles is another cruiser, hopefully one with good AA” … with a carrier, don’t need the destroyer to spot for the team, the carrier is doing the spotting.

He finds Clan Battle seasons with carriers boring, that due to carrier spotting the games are repetitive exercises in blobs grouping up for AA defense and which side has their blobs push better than the other side’s blobs.

He believes that it’s not the carriers that kill competitive, it’s the spotting. Similar to if you removed fog of war, if everything was always spotted.

In Random Battles, it’s not a co-ordinated team working together, and the 12 ships involved makes it harder for the carriers to spot all the ships across the map.

I reinstalled this weekend. The three tier 10s I have unlocked and unpurchased are DDs. But I am not sure how consistently I am going to play yet.