Watch a Tesla owner blow up his own car

For those of you watching the incoming wave of Tesla electric cars, here is a serious consideration. Tesla has some serious restrictions on repairs of their cars. Personally, I will not own anything that requires the authorization of the original manufacturer of anything I am looking to own, be it a car, a pc or anything between A-Z.

But this particular story outlines some really serious issues that apparently the manufacturer did not seem to consider…at least not as far as I can see. A little review of one’s restrictions based upon the possibilities of technology not working as you intend it to, would have been in their own interest I think.

As it seems, they will receive some very ‘interesting’ media attention with this story. 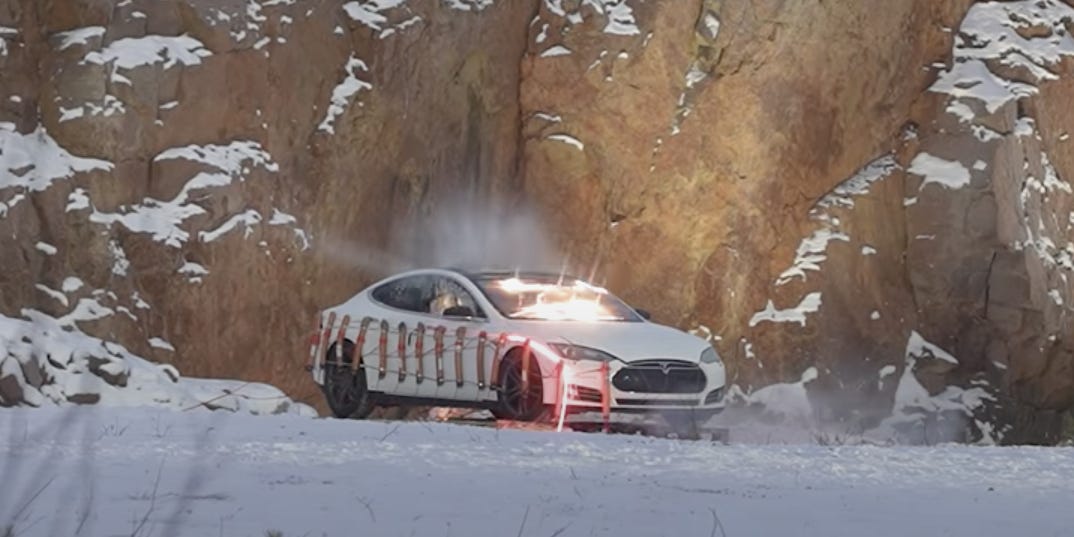 Watch a Tesla owner blow up his Model S with 66 pounds of dynamite instead of...

The car was not covered by a warranty but still required permission from Tesla to repair — so Tuomas Katainen decided to do something different.

$22,000 for REPLACING A BATTERY SEEMS TO BE INCREDIBLY OVERPRICED.

Yea, but what’s worse is that Tesla is refusing because they “don’t like the repairs done so far” to their car. Seems they have a long way to go to get to a quality product. Its obviously a faulty/defective part.

But considering how nickle mining is destroying our planet’s vital rain forests, one also wonders if it’s not nearly expensive enough for that battery.

I give a 10 for execution and 10 for artistic quality.

And usually what this murky business about repairs means is that some unauthorized work was done which violated the warranty and that’s not necessarily foul play by Tesla, especially suggesting this person was too cheap or impatient to fix it the right way and totally their right to blow up their own car spending their own money and resources on the production of it to make money putting it on youtube. And I’m pretty sure with that many hits, he won’t be worrying about how to buy his next car. At $5 per 1k views that’s $25,000 for 5 million views and still going.

It’s funny stuff but there’s too much of this and that going on to make heads or tails of it other than lulz at what people will do for money.

I wouldn’t be surprised if Musk gave him a new car just to say thanks for the publicity, because there is no such thing as bad publicity.