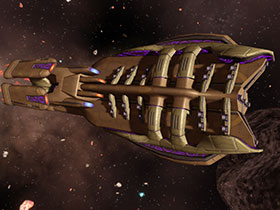 Open R&D Boxes for the next few weeks, and you could earn a ship of your choice, including the brand new Vaadwaur Juggernaut!

Would like to know what everyone think of this ship. IMO it looks meh, its stats is good though I would recommend the Tzenkethi Tzen-tarr Dreadnought Carrier over this ship even though its exactly the same layout except this ship does not have 2 hanger bays for frigates which seriously gets a minus in my book (so basically a very watered down version of the dreadnought). The only wow feature is the T5 ship trait unlock which inceases crith and acc while lowering the power cost to fire weapons.

I don’t like its looks personally, but if you have any of the other Vaadwaur items from the other ships, this could get nasty quick.

It has the innate trait of the Juggernaut array.

It has the supercharged SIF console, then it can take any of the Vaadwaur consoles, Assault Mode and Polaron Cannon Barrage.

Then the Tier 5 trait Weapons Emmiter Overdrive affects both beam and cannon weapons.