I’ve thought of playing it again, since years ago. I was in a small guild and most of them played the good side, so I was very lonely, and I think the good side was pretty boring, and most of my alts were on the bad side.

I re-downloaded the game without problems, but got issues when the client was patching, it just would not patch. So I thought there was a problem with the patch. So I uninstalled the game, and now it just won’t download. Generally looking in my fire-wall and put them with permissions works, or closing my fire-wall temporarily works, like with Steam and the updates.

I bought a game card, and I want to resolve my problems and be able to get ingame before activating it. Thing is I’ve tried on their website, and their Support is for those who are active and are paying, and that include their forums. I think they’re assholes, I spent too much time on their Support lines yelling at them. That is one reason I’m weary of them and playing the game.

I really don’t know how to resolve it.

Their patcher is absolutely horrible, so the fact you’re having issues installing/patching does not surprise me at all.

Unfortunately (unless they changed it), there’s no other way to get the full install. It’s one of the reasons I quit the game, after 2 patches in a row, it cost 2 days to even get the patcher working.

They use a 3rd party commercial patch program for it, if I remember right, and if you by accident removed that, quite often it will not reinstall even with a reinstall of the game.

Good luck! I can’t be of much help, I’d just be a negative nancy (or sarcastic splutty)

Try to install through origin instead of the website. I had no problems when I did it that way this week

I am currently at work, but I will look at the installer when I get home. There is a small icon that allows you to change installer settings. Make sure you are installing to C: and the default directory. Whenever I install to anything but my primary drive, I had problems.

I never install games in C, but rather on another hard disk or another partition.

Well, I’ve tried not changing the install on C, but it looks like it’s still not downloading

It let me install through Origin. I don’t know if that’s because I bought the game originally through it, but it did not require me to go to the website.

Well I bought the Digital Starter Pack on Orion, hoping it would added to my games in Orion, but it was not. Instead, I was given a link on SWTOR website, to login, add my key, and download SWTOR client there. And I tried to download it again and it stayed at 0%. I tried to add the key in Orion without success. 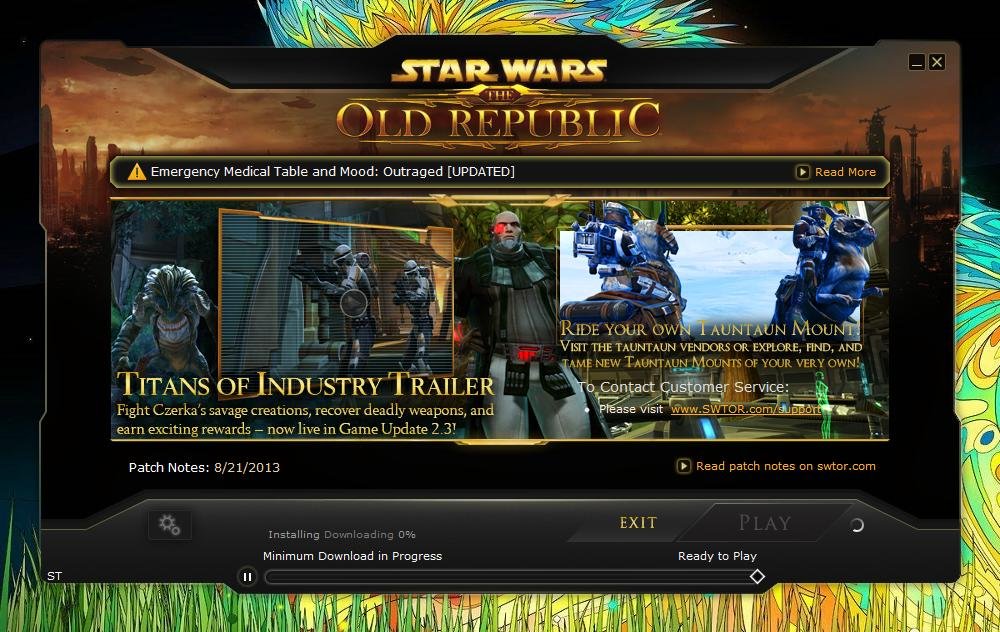 r/swtor - Patcher not downloading at all

If you go to :\Program Files (x86)\Electronic Arts\BioWare\Star Wars-The Old Republic Do you have a file called launcher.settings? If you do open it in notepad and find the patching mode line and change it from BR to SSN.

This disables the streaming launcher, which maybe causing the problem.

Make sure you look at the article, because there are slashes here in this that aren’t showing up in the web forum.

That looks familiar, actually… I think I might have done that once or twice…

I did that. but I don’t know if it works or not, my email is not receiving the codes they send. I’ve tried to change my email back on their website, but they also send me validation code, that I don’t receive. How unlucky am I?

Thanks! It worked and I managed to download the game, especially when I found out that they send the codes to another email. Well, I can play now.