Story Time: The misadventures of a DoorDash (IN SPAAACE) gone wrong

This was an adventure I wasn’t expecting!

I was in my Cutty Red (Space Ambulance) and took a job from Ling deliveries that involved taking 3 packages from a bunker. SHE SAID IT WOULD BE SAFE!

As I arrived there was a Drake Black (with red Icon) and an Aurora MR (blue Icon) there. I asked in chat if a ship with a name like DRAK_Black_52523351235 was a player or NPC, someone told me it was an NPC.
I also noticed that there was a red marker underground that I recognized as the same one I have when I die (sometimes) …so I figured maybe the guy in chat lied, but what do I know? Maybe these were NPC ships there to thwart my delivery!

Note: Before I moved into the bunker, I spent 10 minutes outside circling to see what was going on and asking questions in global chat. I also checked for beacon missions (which I don’t 100% understand, but I figured maybe I’d landed at one?).

I go into the bunker and there is:
Lots of guards all over
Body 1- A red marker on a body dressed as a 9-tails.
Body 2 - One fully-equipped body that didn’t quite look like a guard.
Body 3 - There was also a naked body

I assumed the 9-tails was the player since they had the marker. I figure nobody is coming back since it seemed like when I die in a bunker I often do a corpse run with a starter ship and then die again. I’ve done that a few times, given up, and moved on.

So I start to loot. I was in a flight suit with a backpack and sidearm since I don’t bother gearing up fully anymore. I die too much.

Body 1 seemed more like an NPC based on their gear, but I’m still not sure.
Body 2 had a med gun, so I figure “what the hell” and point it at them. THEY WERE NOT DEAD! I was about to save my first life!

I run for it and leave the bunker. I figure the guards will take care of the player. They could work things out amongst themselves…

I get back topside and someone is in another Cutty shooting up all 3 ships!
I get in global chat and ask why the fuck they are shooting my ship and they are yelling that I deserve it for killing them and looting them!?!?!
I’m like, why destroy all three ships and try to explain my side but it kinda goes nowhere and they refuse to stop shooting. I’m now at the bunker, mildly injured and with 3 wrecked ships around me. Mine doesn’t spawn my crate, which means I lost my loot from a previous investigation mission. Someone kindly sends me some cash to make up for the loss I’m about to have (they weren’t even involved).
*Just wanted to note there are non-psychotic people in game as well

I backspace out and then do a corpse-run to my own red marker with my Pisces.
I go back into the bunker to see WTF was going on and find a 3rd (4th?) dead player body. I know they were a player because they had the free flight suit on.
The person who shot me was somehow just “gone”. I didn’t find their body and they didn’t kill me. Maybe they despawned?

Anyway, I’m wondering if the person I rezzed was actually the murderer and not the original victim. Maybe the guards got them? Someone in chat suggested they were a bot… really, in this game?

Either way, I don’t understand the Red markers which seem to be really inconsistent for how dead people are marked.
Is there any way to tell a dead player from an NPC?
I guess I now know that generic ship names are unmanned player ships? Maybe the red marker was owned by the murderer?

Anyways, it was fun but confusing and I’m not sure I can blame any of it on bugs 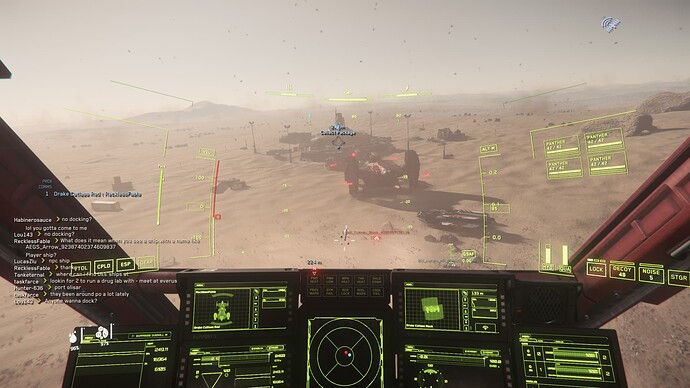