UPDATED VERSION (notes added at the bottom of this post):

Basically this is a sneaky melee build that focuses primarily on doing as much damage with a single sneak attack as possible. It is NOT focused on defense… unless you count the best defense being a good offense. You can obviously use the Gladiator Line for 1H weapons or the Slugger Line for 2H weapons. Incisor bypasses armor and martial artist makes you swing faster just in case you didn’t one shot the enemy. Sneak/Ninja for sneaking up and getting 3x damage. Escape Artist because Run doesn’t affect Sneak? Yes please. Action Boy/Girl for using VATS to get that burst forward to close the distance so you don’t have to sneak RIGHT up next to the enemy and the faster it replenishes the more times you can use it consecutively… potentially hopping around the battlefield from one enemy to the next thus triggering your Adrenaline! which will keep your damage high in those fights with more than one critter. (STR 15 and AGI 15)

This build heals itself through a synergy that I THINK will work well. Lead Belly 3 means you don’t take any Rads from things you eat or drink. Cannibal means you can basically now eat any living enemy you kill to replenish food/water… and no rads thanks to Lead Belly

Because you are eating everything but robots you should be Well Fed and Well Hydrated almost all the time, which means you get an increased bonus from Rejuvenated. Plus a 12 Endurance with a couple points of Life Giver gives you a large HP base to get through a single fight without worrying about healing too much until everything is dead and ready to be eaten.

I’ve Listed CHR 3 Philanthropist 3 because if you are eating everything your group kills, why not keep their food and water levels topped off without them having to eat or drink and get rads too. Obviously interchangeable with other CHR perks like Lone Wanderer if you are solo or anything else you desire… I listed Philanthropist simply for the synergy with the Cannibal stuff and not having to make your group slow down to eat and drink is way cool.

INT 3 for First Aid 3 for the occasions where you have to pop a Stim Pack. Swap out for the 3 Hacker Perk Cards if you need to hack a terminal. (This is going to be a secondary character for me and won’t be making his own weapons and armor… I’m planning on having a different character to make stuff for him so I varied from my normal thoughts of always having at least a 5 in INT)

PER 3 Fire in the Hole is for Throwing Knife range increase in case you need to pull something with a ranged attack or something is out of reach of melee for some reason. Also swap for the 3 Lockpick Perk Cards as needed. I have seen some discussion that thrown weapons may be increasing off some of the melee damage perk cards but I have seen nothing that has any evidence attached… but it’s also thematic for the ninja character to throw knives(shuriken).

LUCK 5 Bloody Mess 3 because 15% damage (which is what this build is about) and you are probably going to be a bloody mess after eating everything you kill raw. Starched Genes 2 because I think every end game build will probably have this on hand for when you get that perfect mutation that fits your style.

Some good variants to this build would most likely be in the STR and AGI catagories since those are the most populated:

Maybe drop the 2nd and 3rd star of each of the STR damage cards dropping the bonus from 60% to 30% (1 of each card is better than 1 card with 3 stars) and replacing that with Barbarian to get some good defense and maybe Blocker if you prefer.

If you get a piece of armor with the chameleon buff you can probably drop most or all of your Sneak perks and grab Evasive for another defense boost. Other potential drops are Action B/G if you aren’t using all your APs and are taking a lot of damage. Or dropping Escape Artist if you aren’t seeing any benefit from it (I haven’t used it yet in FO76 because I haven’t been in much of the betas yet). You could also Drop Adrenaline to get Evasive if you felt like it, but I just like the idea of raising damage potential from chain killing.

If you don’t like being a Cannibal you can always drop that whole Synergy and get Ironclad and/or Adamantium Skeleton.

If you do all three of these and take Barbarian, Evasive and Ironclad your defense basically goes through the roof. It’s actually how I built this character before I made him a Cannibal

UPDATE NOTES:
I decided to use 2H melee instead of 1H so Slugger is represented in the STR cards. I’ve also been using power armor. Yes, you can be sneaky if you want to in power armor. I scaled back Cannibal to 1* simply because its a pain to get out of the PA to eat corpses. If I get a Good Doggy Card I will likely put that on in its place because I tend to carry around a lot of dog food.

I’ve also made some concessions to how you can actually take cards as you level. Of note is taking things like Marathoner and using my Thru Hiker cards as placeholders until I can get more Adrenaline cards after level 50. I also need to pick up 1 Master Slugger card at 50+ to swap in for my Pack Rat card. You have to use some filler cards like that if you want your final build to take advantage of the higher level cards.

Also I took 1 Power Smith card so I can make Power Armor as I find Plans. (I THINK this also lets me scrap PA pieces to learn mods, but data on that is sketchy).I have a crafter character who will make his weapons and then use friends to trade them over. I took Luck of the Draw to cut down on weapon deterioration. That slows me down right now more than anything. Power Armor doesn’t get damaged too badly as you fight and Fusion Cores have not been a problem to find at all… I have too many right now and I never take off my Power Armor.

Very unsure where to go from there. Was going to focus more on melee but guns/ammo more plentiful than expected. Melee worth having as a backup of course but not sure if I need to focus on it as much.

Do feel having at least 5 in each stat might be beneficial though. Will play around with the build maker and post here…

This is what I’m toying with, but things may change: 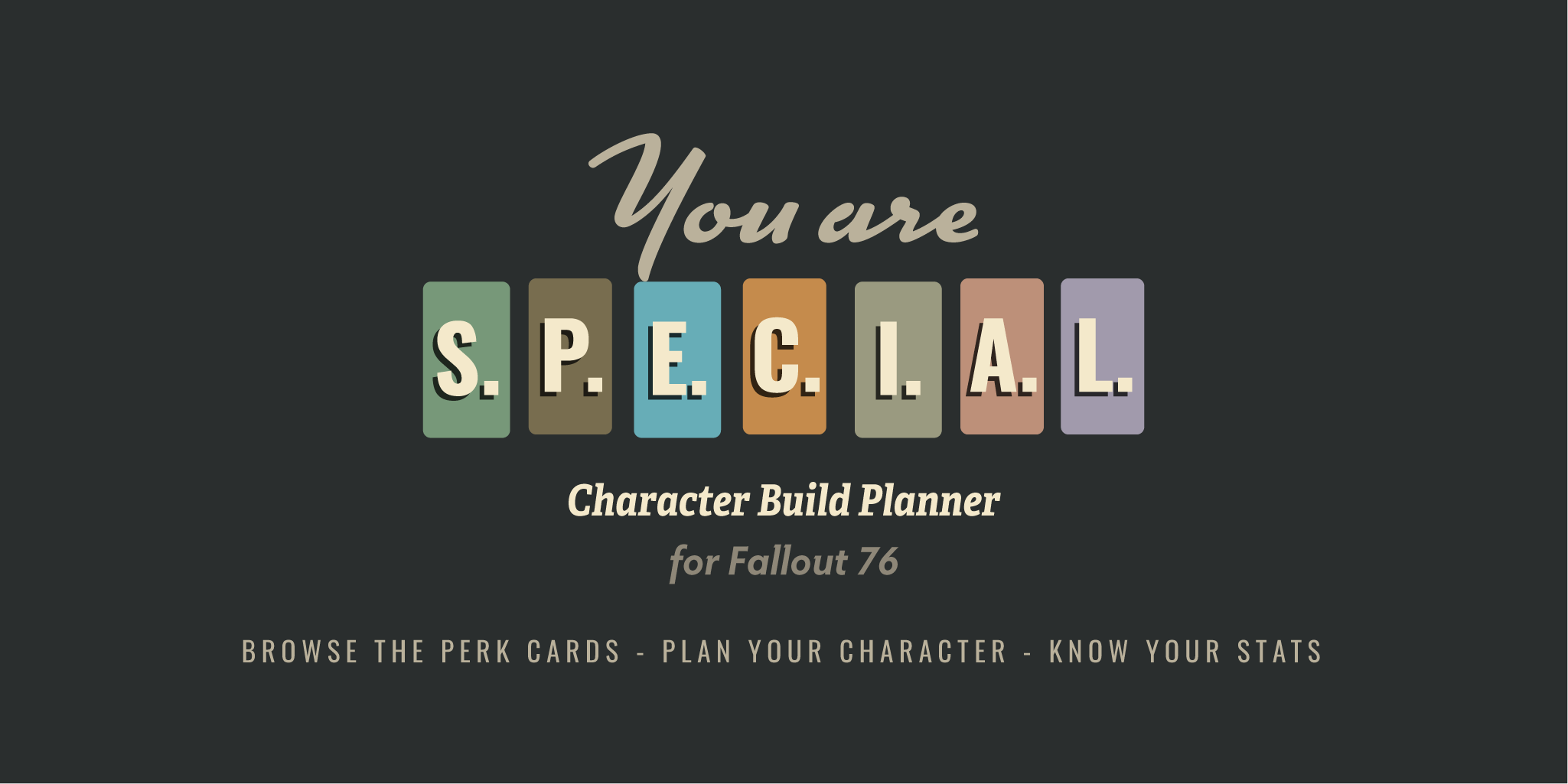 The plan would be to swap out the Gunsmith perk under ‘I’ for any other relevant crafting perk when needed, or Hacking at terminals, assuming I have the perk cards.

Whether this will be effective or not in the long term is another story altogether.

Finally got my main build figured out. Exploring/scavenging has always been my favorite aspect of Fallout. The following S.P.E.C.I.A.L. point allocation seems to let me do that and also take advantage of the OP nature of melee combat by shuffling perk cards around.

Hybrid build focusing on Heavy Weapons and Power armor usage, with lots of crafting options. I put too much into Endurance leveling up so I will have to spend some levels moving a few points from Endurance to other stats, but I have most of the perk cards I want already. I’m not much of an alt player, so I will be using post 50 levels to tweak the build.

After a month I’ve figured out my play style tends to be more about picking up everything that’s not tied down. Which ends up frequently tying me down. So I’m switching my build up quite a lot to allow me to be a bit less encumbered as a Pack Rat.

Heh, I thought it was appropriate. Many of the chosen perks are specifically designed to reduce the carry weight of weapons, ammo, armor and junk.

Heh, I thought it was appropriate. Many of the chosen perks are specifically designed to reduce the carry weight of weapons, ammo, armor and junk.

So you have some things that lower the weight of pistols. Just saving weight or do you use pistols over other weapons???

So you have some things that lower the weight of pistols. Just saving weight or do you use pistols over other weapons???

I’m still working on the build. I mostly use pistols, but I do also have a sniper rifle and shotgun.

Thinking I need to swap Ordnance Express out in favor of Sturdy Frame at this point. I don’t actually use explosives that much and just end up selling them in the long run.