We’ve been waiting for a possible sibling for Margo, our rescue from several years ago. Today I picked up a candidate that just might work. Her name is Nellie and she is a 13lb Dachshund mix, about 9yrs old and as sweet as can be.

First meet with Margo was excellent. They totally ignored each other except for side-eye glances. Margo was the one I was afraid would be hard to please, but so far so good. She really looks interested…follows Nellie all over the place and has not been rude. 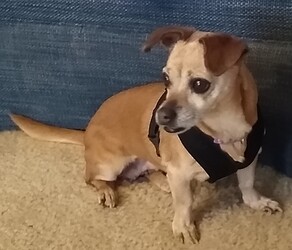 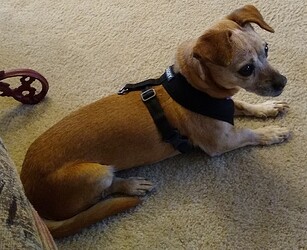 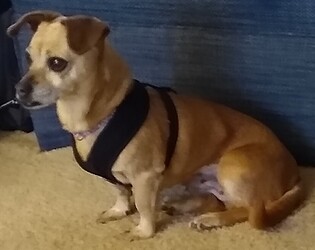 She is well mannered, happy, crate trained and house broken, and does not appear to be a barker which is good, neither is Margo. I turned them both out into the fenced in area off the back door and deck area, and they had a good time wandering around. So as long as peace reigns it just might work.

According to the Rescue folks:

She was surrendered to a local shelter but we weren’t given any reason why. They didn’t even share her original name, so we dubbed her Nellie. She’s been with us for a week so far and we can’t figure out why anyone would let her go. She’s exceedingly sweet and well-mannered and great with the other dogs in her foster home.

I’ve been hoping to find a companion for Margo so she won’t feel so lonely around us old folks because neither of us are that active (my son is 48). Good news too is the fact that she does not jump up on furniture at all. Perhaps she was discouraged by that because, even when Margo got up on the ottoman, she would not. When I picked her up to put her on the ottoman, she seemed afraid, so I figure she was punished for jumping up on furniture judging by her posture.

We are in day one of our 7 day trial period, but if this continues and the temperature between them actually warms up without any flare-ups, we will probably keep her.

This is so cool! Congrats!

Don’t worry if once Nellie settles in a bit, Margo makes it clear she is alpha. She isn’t, you are, but they still have pecking orders. And Margo may feel it’s necessary to show her dominance. Since Nellie seems uneasy, most likely she will immediately submit. Feel free to ask if you have any questions.

Also my two littlest ones have puppy wars that would make you think they are fighting, with all the growling, but they are just playing.

Thanks Aery, this is still in trial period until next week Sat. My son and I will be observing how they get along because its important that its a good fit before we commit permanently. Having a week trial period is just great at this point, as I was worried that if something arose that neither of us had anticipated, let alone be able to handle, is a relief. Making sure Nellie will be comfortable as well as Margo is paramount.

My son is worried over the age differences and intelligence level between them will be a problem. Margo is extremely sharp and doesn’t miss anything. She was immediately able to learn our patterns and adapt. We need to make sure they are compatible. Nellie does not appear to be as sharp as Margo, but she is sweet and anxious to please, and very, very timid. I have to watch that Margo doesn’t go all aggressive on her. Need to make sure Margo realizes we love her and Nellie is not usurping her in the family.

Apparently, Nellie has been physically abused. Judging by the rib that looks as though it was broken, apparently she never got proper medical attention because it sorta bends out from her ribcage a bit. Although not that prominent, its noticeable and seems to be consistent with having been kicked from the other side since her right rear leg also appears to have been injured.

She has been checked out by the vet and got all her shots, spayed and chipped. We are just grateful these old injuries have not seen to have hampered her ability to get around. I do know that the rescue group had her checked out thoroughly because those types of injuries could cause long lasting problems if not healed. But so far so good. It just makes me mad to know she was hurt.

Grats Lyn!! What a little cutie.

She definitely is. But this morning when I got up I found she had taken over Margo’s bed completely and poor Margo relegated herself to the lounge chair sans her comfy plush bed that she likes to burrow into. So it appears a new bed is in the works.

Of course that could have been partly because Margo felt it necessary to crawl into my bed under the comforter in the night sometime, which might be an anxious reaction to feel close and comforted over this new dog. Of course abandoning her own bed for mine made her bed the perfect empty target for Nellie to move right in. So off to shop for a new comfy bed and another dog blanket.

I should have seen that coming really, and provided for it. But not being that familiar with dogs’ needs, I learned something last night. I shall just have to treat both of them like I did my boys…they have to have their own to prevent a war breaking out over what belongs to whom.

The person might have lost their house, due to loss of occupation, and move into a apartment. That happened to someone here at work (vet hospital) recently out of high school and lives with their parents. They had to surrender their two dogs due to the apartment’s rules.

That is very possible, but Nellie has been abused. And on top of that she was surrendered to a shelter who in turn gave her to the rescue group I found her at. The shelter was not able to provide any information on her at all because those who surrendered her refused to even provide her name.

The inside info I was able to obtain from the rescue group was that Nellie was surrendered in poor condition. She is currently undergoing heartworm treatment but has a good prognosis for that. However, other small details like her over grown nails and thinness at the time she was surrendered did not speak well of those who had her.

There are many possibilities, I’m just angry at how poorly she was treated to begin with to be in this shape by the time the shelter got her and passed her onto the rescue group. I have a friend inside the rescue group who was able to give me that much information, but even she was upset over Nellie’s condition.

Fortunately, she is doing really well and is sweet tempered. But she cowers when I reach out to rub her behind her ears which indicates to me someone had been abusing her. Add that to the healed broken rib and the damage to her right rear leg (also healed), and having heartworms on top of all that besides being thinner than she should be, indicates a horrible experience.

We are just hoping she and Margo can bond. Margo is still not sure of this new visitor and I cannot keep Nellie if Margo gets aggressive with her. That would not be fair to either dog. Margo usually gets along with most other dogs, but she is younger and more like a cat than a dog, so Nellie’s sweetness and tendency to a mild temperament may be in her favor.

We have a week to see how they work out under our normal days now that Thanksgiving is over. She walks well on a leash but is very slow so I can’t take her on my morning walks like I can Margo. That is ok as far as I am concerned, because that would give Margo her special time with me that she looks forward to every morning.

I’ll keep you all informed as this story plays out. I certainly hope things work out, but won’t know for sure under such a short time as just a couple of days. Will need the full week to see. So basically at this point the rescue group considers me to be temporarily fostering Nellie, which helps them a lot.

Let us know and again, congrats!

I’m keeping my fingers crossed that everything works out.

Ok, here’s an update. Unfortunately, Nellie and Margo don’t seem to care about one another. Margo basically ignores her and Nellie is totally uninterested in interacting with Margo either. So its become a no-go, especially since Margo was the one we were trying to find a companion for.

No fights, nor was there any tension between them…just nothing. Nellie is a really sweet dog and I suspect she would be happy anywhere as long as she was able to get into someone’s lap and get hugs and scratches. I figure she would fit in just fine anywhere.

So tomorrow I am surrendering her back to the SOHF rescue group and wish her well going forward. I decided to give her parting gifts now instead of waiting…so she now is sporting a new Gooby harness (one of those that Xs across the chest and not around the neck), and a lovely new blue with white striped sweater that fits her small frame perfectly.

My hope for her is to find a forever home with lots of pats, scratches and lap surfing because she deserves all that affection. I think had we not had Margo, I would have kept her.

Aaawww. So sorry it didn’t work out.

Is it possible for you to take Margo with you when you go to pick up another one? Letting her meet another pup outside the house might be a good idea. I took Chloe and Cienna to California when we picked up Chauncey.

I did take Margo with me to meet Nellie, but they were more interested in the store surroundings than each other, so it was hard to tell. It took several days for us to realize they would not work out together.

Well I hope you find a pup that works out.

Thank you. It might be a while before we actually find one that works out. I doubt I’ll have the opportunity to have another trial period since so many of these are actually up for adoption already.

They do have a 3-day period where you can return one if the adopted one doesn’t work out, but it might work out well that way. After all, I picked up Nellie on Saturday around noon and by late Monday night/early Tuesday we actually made that observation to return her.

I keep hoping one will immediately jell with Margo, but will have to see.