Picked up the Pisces

Melted one of my P-52’s to buy a warbond Pisces. Its flyable, so I took it for a couple of box missions. It isn’t a fighter. It is a runner. Top speed was 1150. Quantum fuel tank has 785. What I have is a 3 person shuttle with Jump drive capability. Of course if it ends up where all but the snub ships have Jump drives, this won’t mean as much. 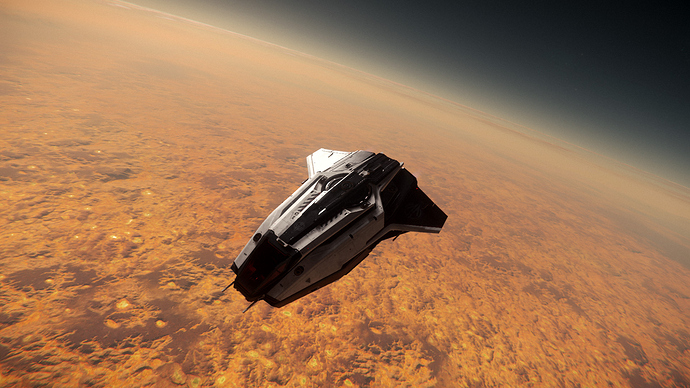 Sticking with my Titan Renegade for a quick little cargo runner. Enough guns to keep the pirates honest but still just a light freighter.

I picked one up as well and for what it is I think they nailed it. This is the shuttle for the Carrack. It has a little cargo, room for 3 and a scanner. Sure it is not going to stand up against a dedicated fighter for long, but it shouldn’t either. It has enough firepower to stay alive and run, and get back to the mother ship.

I like what they have done here. Fits well for the intended role.

I also grabbed one. Worst case i can use it as a token. I’m thinking of using it primarily for helping the Carrack map out some difficult jumps. A lot cheaper if something goes wrong.

Does this not come standard with every Carrack so you do not need to purchase it seperately? Granted the Carrack version only has 2 light lasers so the Expedition model will be a step up in a dog fight if that is what you are going for.

Yes the Carrack does come with the base model.
I actually didn’t think before i grabbed it. So I spent another 20 on the upgrade for the one that comes with the Carrack. I will probably use the other as an LTI token in the future.

Same, as well as the Kraken upgrade because a shop makes sense for me. Will snag the Mole too.

No mole for me, but keeping close eye on the Crusader Ares next week

The Kraken ship thing is still for sale as of this morning. It’s about the only cap ship that still is. That’s a lot of money.

I got my Kraken at last year’s CitizenCon sale when they first came out. About half credit and half cash. This year I just picked up a conversion kit and I am waiting for the QA to see if I want to apply it or melt it.

You know I wonder what going to happen when the game goes live and they have to wade through all those trade-ins once and for all. I have an aurora mr that was a stand in for the tumbril cyclone. I received the cyclone and yet the aurora is still in my ship roster. A serious clean up needs to happen.

Well by the time beta rolls around, all CCUs will either be used or deemed null and void - which I assume means you will just get a store credit for any unused ones.

Well some people think the game will never go live. If that happens we can enjoy all these ships forever even if we do not have LTI on them. As an investor in this game I quite enjoy jumping in every now and then and flying some missions. Bugs or not it’s still a fun game to play around in so I am satisfied.

Oh it will go live, just not in the traditional release date way.
At some point the game will be announced at beta, that has to happen for reasons. But when that happens they can basically say all of the core tech and features are in place. Maybe not performing perfectly, but in place.

After that there will be a point where they make the last wipe and call the game live. It will likely not be announced months ahead of time but will be more along the lines of “Hey this next patch, we think we have things working well enough now to call this a game so this is SC 1.0”

And from there, the ride continues as the game further develops.

What gets me is that the doubters are all upset about whether or not the game will ever be released while I find the game quite enjoyable as is and have gotten more than my moneys worth out of my investment playing the game in this mode. If or when it goes live fantastic but for now enjoy unlimited game play flying various ships around the verse. Every patch it gets better and better.

I think it will make it to live. If there was a scam for cash, they would have folded by now. Also if it was a scam there would be no new improvements to the alpa. It would never change. But it is progressing and I am mostly satisfied with it.

Yeah there are two groups that doubt the live release.

The first is the group who thinks it is a scam and will eventually fold and CR will take everyone’s money. That was is absolutely absurd since there are over 500 employees getting paychecks from that money and the company is growing, not dissolving.

The second is the group that thinks it will remain in perpetual Alpha forever. This group is a bit harder to talk to and convince because all they see is the years of Alpha and then compare it to other games that have a short 1 or 2 year “alpha” at the most. This is not an apples to apples comparison. There is nothing out there to compare Star Citizen to because nothing out there has started from 0 lines of code and shared with the community ever step of the development. Most games take years to get to a public facing Alpha, and then it is more of a pre-release game preview than any actual feature testing.

I am not saying anything about how long it is taking SC to go to beta. Some say it is too long, others say we are on track, some even say we are ahead of projections. There was a ton of controversy over the release dates and development times. It was primarily due to people talking out of turn, CR being the worst for it. There was also a HUGE game redesign back in 2015, and the scope of the project exploded due to the explosion of funds. That said, CIG has gotten significantly better at scoping out each patch and meeting deadlines. What they still really suck at is communication about missing those deadlines and their advertising and promotion is atrocious. Some say Sandi does a good job and the proof is in the millions raised by the project. I say Sandi is a joke and the project is successful despite her failings. But that is a personal matter and doesn’t pertain to this topic so moving on…

When people ask me when I think the game will be released Live, I answer simply, “When it is done.” There is no other answer. CR is going to keep working on it until he is satisfied that it is ready for release. Until this past year, that looked like we would never see a release because CR is never satisfied and always wants to move the goal post a bit farther out. But this year we saw his brother Erin and others like Todd Pappy step up and say no, this has to end at some point. So with the leadership they have in the dev team I think we will indeed see a beta and a live release. It wont be an arbitrary date set out by a publishing company because that is not what we have here. Instead it will be a matter of evaluation. The game will get to a point where everyone will just agree, “Ok we have all of the necessary features to call this a game. Stamp it beta and lets go from here.” And eventually the same for Live release.

But that is just my take on it from the limited interactions I have had with the devs and the time spent watching this project for the past 7 years.

LOL Simdor, tell us how you really feel. Let me give you a story, When I first joined the Army, I was exposed to all sorts of new tech I didn’t even know existed. Night vision, body armor, A lot of stuff I can’t talk about. I had to learn how to use all of it. Took some time. What those who followed after me have improved on it. RSI has developed new tech, and with any new tech there is a steep learning curve. Is it where I want it to be, nope. However, I think its coming along. Going to be hiccups and catastrophes, yep. There have been crashes and irregularities in the tech. Always is. I see a milestone in the tech this year. CR’s attitude this year reflected that. He was a lot more relaxed (maybe drunk or high?) than he has been in the past.