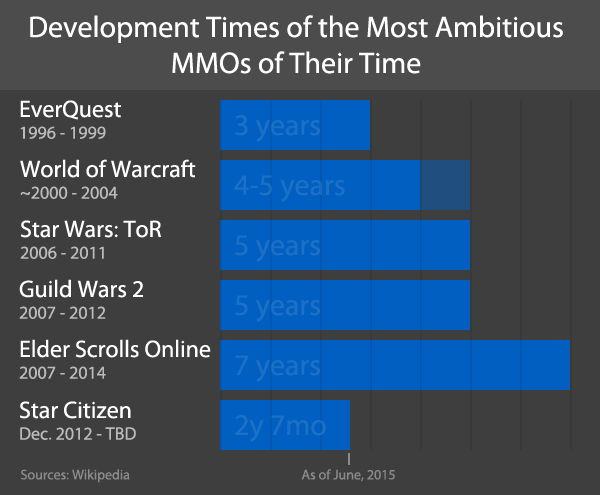 We’re now 8 years on… Longer than any major MMO development timeline and they still have no compelling gameplay, just a tech demo.

Anyone else considering cashing out on the grey market?

I am glad I held off “purchasing” this one.
It is a shame.

I ended up purchasing it quite some time ago. And I’d have to agree with you @TheStargazer , it really is just a tech demo., albeit a beautiful one. But yeah, definitely NOT a game.

What is painful is it USED to be a game for a while… Arena Commander was FUN.

It was instanced combat, true, but both the death match and racing versions were a lot of fun to play.

Then Chris Roberts decided he didn’t like how people were flying using the systems he built and fucked up the flight model.

I am enjoying the game as is. It has bugs but I have seen bugs in finished games as well. It has a lot more content than it did a few years ago and as long as it is in alpha i have virtual LTI on all my ships and equipment. You can get into the game for about $50 and build up to a decent fleet. They have persistence between patches so even when they upgrade you keep most of your stuff. Not fussy about the reputation wipe on death especially when it happens from a 30K but I also do not expect the game to be perfect at this stage.

You know I cannot stand to see misinformation like this being spread about any game but obviously this one more than most.

Not longer than any other MMO development.
They have MUCH more than a tech demo.

It is literally plastered all over the site that it is still an Alpha.
If you expect it to be a game in alpha then your expectations are unrealistic.

Let me clear up some false information here.

The original kickstarter pitch was over 8 years ago. But that game no longer exists.
In 2015 a complete redesign of the game happened. And with that came a new vision for the game.
So the actual development of Star Citizen in its current design is just under 6 years.

Even so, many games see more than 8 years of development, especially MMOs.
The “game” is still in alpha, which means they are still building core tech. They have regular quarterly major patches where new core tech is introduced. Between those there are 1-3 minor patches for bug fixes and other smaller or isolated features. This has been the schedule for over 3 years and they have not missed the release cycle yet, even during the worst of COVID when it was only delayed by a couple of weeks.

With each major patch there are significant milestones met.

Would I like to see it happening faster? Sure, who wouldn’t. But to say it is not more than a tech demo is just ignorance.

There is a timeline for development that is shared on their site, called the Roadmap, that clearly lays out what they are working on and what is coming in the next 3-12 months.

It is unfortunate that anyone who pledged for the development did not understand what they were getting into. I can understand that being part of a large development like this from the very start is not something most gamers have ever had the opportunity to do before so it is unfamiliar. Similarly, not being able to recognize Star Citizen is much more than a tech demo is just childish ranting or ignorance of game development.

But, long term development support is not for everyone. I don’t begrudge anyone who feels they cannot stick it out and must sell of their pledge. I am just not sure what that even gets you at this point since your pledge money is 8 years spent. It would be like getting front row tickets to a concert then leaving after the opening act.

But to say it is not more than a tech demo is just ignorance.

How many hours of original gameplay content would you say Star Citizen has, not repeating any cookie cutter missions?

I’ll give you a hint. It’s in the single digits.

I would challenge anybody to be able to become proficient in most aspects of this game in Alpha test in under single digit hours. Whether it’s bounty hunting, box missions, trade missions, mining or even some of their events. This game has a fairly steep learning curve. It’s also in ALPHA test which means there is no manuals on how to do things aside from what tutorials content creators have made. Sure thing if you wake up at a station and can’t figure out how to get to the spaceport it might seem like there is nothing to do in the game but I have gone through a fair bit more content in this game than most finished games I have played. “No Man’s Sky” comes to mind as an example. Too each his own I guess…a tech demo for you worked out to be a hell of a lot more for me.

I’ve no option for cashing out. I’m not putting any more money into it and it’s not on my desktop. I’ll play the heck out of SQ42 when it comes out, may putter around the PU, and will happily jump into the inevitable class action suit

Seriously, when was the last time you did more than boot up the game and jump in AC or spent more than 30 min in the PU?

First I am not mad at anyone.
Not sure what the rest of that is supposed to mean.

I am not erasing any years of development. Count all 8 years if you would like. Then show me another MMO of half this scale that was done in less in the last decade.
You cannot.

My comments were to correct the mistakes of the comments before mine. Some people are pissy because they did not get the game they pledged for in the time they felt it should be delivered. That is fine, they can do that, it is their money and their right to get pissy.
But to say the game is not any more than a tech demo after 8 years is incorrect.

I feel like qualifying it with “of this magnitude” is a fine way to kind of decide how you feel about the progress. But there are plenty of counters to that argument.

If I pledge for a cooler, and Chris decides he wants to take that money and build a jeep that the cooler really isn’t that great without. The fact that it takes a long time to build a jeep isn’t really a defense to my complaints about the cooler.

Honestly though, I feel like you have the tougher side of the argument even defending the progress they have made on the jeep, but you have a lot more data there than I do, as I’m just an interested observer.

The only reason I commented at all, is because I feel like you took the stance of correcting posts with facts and data, but I think you kind of slid between facts and data and opinion. Which is fair I think, but not if you are the acting fact checker.

I have no opinion on whether it’s a tech demo or game, except to say that seems like purely a subjective distinction and both views are fine with me.

Wow, what happened with you mcallen? Unless I’m interpreting your post incorrectly, sounds like you’ve lost faith in the game, where you used to be all about it. Shame.

I lost faith years ago, I was just enamored with the idea of the game, but it hasn’t been that in 7 years or so. I loathe PvP, in all of its forms. Every single time I’ve logged into SC I’ve been ganked. Every. Single. Time. I don’t have a single pleasant experience in this game, I’ve never been able to do anything I wanted, in any form, so I uninstalled it. A year later I installed it again, was playing for 10 min and was ganked. Logged out and uninstalled. Logged in this last year for the convention, decided to hop into one of my ships and fly it around…8 min to gank.

When I initially backed the game, this was going to be a big Wing Commander, which I loved. They promised private servers, PvP sliders, the ability to opt into PvP, anything and everything to lure money into the game from PvE players. They lied, about all of it. 99% of the content that exists in this game is PvP. Everything else is stuff the players make up to entertain themselves between PvP. Mining? A thing to get you out of the station so you can get ganked. Hauling? A thing to do between ganks. Exploration? Looking for places to get ganked. CIG has zero interest in putting in any game play I will enjoy, and 100% interest in making ME be the content, which I simply don’t enjoy.

I’ll play SQ42 and enjoy it. If I’m allowed to fly my ships around in the SQ42 'verse, I’ll enjoy it. I doubt I’ll ever actually log into the PU when it’s live, I have WAY too much to lose. If I find a way to sell my account I will, and I will absolutely jump into any class action lawsuit I see.

I’m really sad to read this mcallen. I still love it, although I have to admit that the majority of the time I just tool around achieving nothing at all and it usually ends with my ship blowing up for no reason or some critical function stopping, which kills the experience dead. I haven’t been ganked at all yet though.

Can’t you appeal via Concierge for the to refund (the vast amount of) what you’ve spent, based on what you’ve said? I mean, you’ve paid for something that isn’t fit for purpose. I thought they did that.

Hilariously, after posting this I booted the game up, woke up at Grim Hex, got into a ship and got ganked immediately, some tool floating outside the station just killing people as they emerge. Er, great. I’m out.

Grim Hex is literally a pirate outpost…did you expect something else?