I am currently starting construction on an Armored Schooner. After it is finished and tested, I would like to put together a guild activity where we take a small fleet of warships out and smash some Ships of the Damned (SOTD). With the Chapter Leader(s) approval, I will coordinate the event and lead it when the time comes. What I will need is people who are willing to participate in either a Sloop, Schooner, Brig, or Galleon with a full compliment of cannons and crews. I will use my Armored Schooner as the rabbit boat to grab aggro on a SOTD and run it through an OTG Wrecking Crew Gauntlet. All loot will be distributed fairly and evenly among all of those who participate.
This game has it’s drawbacks in it’s present stage of development, but I think that we can all agree that it is a very fun game, especially when playing with friends. If you don’t have a fully complimented and outfitted ship but would still like to participate and have fun, you can ride along on another members ship. If you participate, you will be included in the loot distribution. This activity will not be a loot grab, it will be what it is intended to be. A fun guild activity meant to give guild members a chance to play together and have fun and to show off their ship building prowess. And to pay back those darn SOTD!
If you don’t like captaining a ship but still want to participate, help another member build their ship. Help gather gold, food, and the other supplies needed to keep the NPC crews happy. If you would like to learn to build your own ship, let me know. My in-game name is Merv Turner, just like my forum name. I’ll see you guys in-game.

The guys love to blow stuff up so I’m sure they will be on board with fleet hunting, several folks already built ships for whaling and have separate SoTd hunting ships. If you coordinate with Bambi the fleet hunts could easily be added to the regular Friday night guild activity rotation.

60% of Atlas people don’t read forums due to squirrels

Wait, all of those bears and snakes and ghost pirates and you’re all scurd of a little forum squirrel???!

I approve and sanction this event

Can someone send me a link to the forums? Oh wait … yes yes this event sounds fun!!!

Been here a while and I haven’t seen any squirrels tbh.

If I’m around when this event is happening I would gladly join in. Might need a few days heads up so we can gather our fleet somewhere, as I think most gun boats are spread out (most probably on k11, k14, and k15 (well at least mine is in k15

Not sure where we will hunt, but if we are thinking anywhere cold, we might also want to bring a whaler. Whales are out of control - I killed 4 in about 20 minutes last night…

Duplicate of post on the OTG Atlas Discord text channel:

Merv has an armored Schooner that he will sail to K-14 to join up with anyone else who has a SotD hunter ready to go. He’s willing to be the rabbit for this trial run of the coordinated SotD attacks. Booty will be put in a centralized place and divided at the end. Suggestion made to possibly sail to K-13 to avoid whales.

Time to be determined by Fleet Captain @Bambi

The Ship of the Damned OTG war fleet trial run was a success!!

After many booty grabs the guys then set their sights on the Ghost Ship. It proved to be elusive at first, but later in the evening it was spotted. Success was found again and several guildies got the Powerstone (and new dance emote) from it. Well done!! 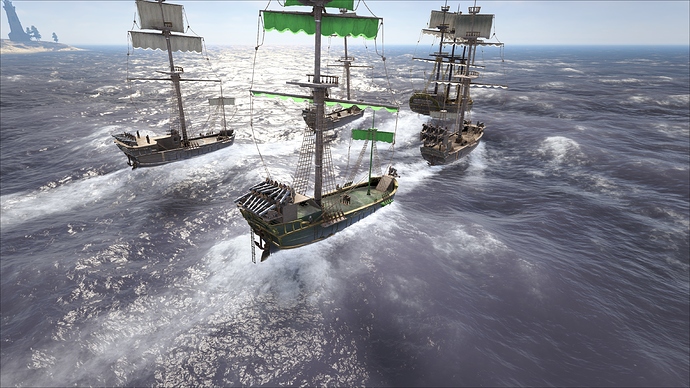