No community news to report this month.

Awduum and Phingers were both promoted from NCOs to COs this last month, there is a post in the forums discussing their promotions and our chapters growth over the last 3 months.

We continue to regrow our membership both from returning players and active recruitment. At the moment we have 4 total officers for roughly 120 active players. We are looking to expand that further with some additional NCOs in the coming months.

May’s patch landed this last thursday and with it came the new PVP reward track, 3v3 Arena Format, a new Mutated Dungeon (Depths) and several new mutation variations. The full patch notes if you missed them can be found here.

Sorry for the Confusion

I’ve learned my lesson and I don’t plan to “experiment” with the event schedule for the forseeable future. Starting this week on June 1st the schedule is returning back to its normal bat station and bat time.
In the future when I make adjustments I will make sure to make a bigger deal about it!

tips and tricks
Your source for small easily digestible nuggets of knowledge provided by members from our community!

HYPOCRATIC OATH
Healing Tip of the Month
By: Caetlyn

The Frontline
Tanking Tip of the Month
By: Warden Nyyx

Tanking is a balancing act of blocking, dodging, and maintaining threat, don’t forget to do all 3! Learn to time threat generation for the gaps between predictable mob animations. Don’t take unnecessary hits to build more threat on a mob that is controlled. Don’t forget you can also dodge, some hits are completely avoidable!

Tanking in OTG gives you access to a reliable resource you can’t always get in a PUG: discord comms. Take full advantage of it to call out priorities, request certain attack types, coordinate stuns, or warn your team when you have to re-orient mobs. As long as you can maintain a consistent tone and direction of action, this makes your needs and behaviors more predictable for the rest of the team.

The Honing Stone
DPSing Tip of the Month
By: Sonickat

Keen as a weapon perk in the context of PVE is not as good as it sounds for classes capable of backstabbing opponents. You should be attacking from behind to avoid damage anyways and will always be getting crit damage from the guaranteed backstab. Instead look for perks like Vicious, Backstab, or a Bane.

bootcamp
PVP Tip of the Month
By: Dame Jennifer

If you aren’t good with PvP, focus on points. Use a weapon with a large area of effect and help provide supplemental damage from a distance by casting things such as fireballs and ice storms into large groups of the enemy to help out the team over all.

When you are holding a point, don’t get distracted by the one enemy that is outside taking shots at you. Remember you need to hold that point and running off chasing them doesn’t add to it’s security, it puts it at risk. For certain don’t take multiple people away from a control point to chase one person.

Time is money friend
Economic Tip of the Month
By: Sonickat

Spend some time farming Orichalcum as soon as you can. There is a perfect storm righ tnow where it’s widely available, cheap, and easy to farm. Based on the negative feedback on the forums right now there is a more than reasonable amount of speculation that changes may make mining the new locations harder or that the number of nodes may be thinned out. Capitalize while you can! 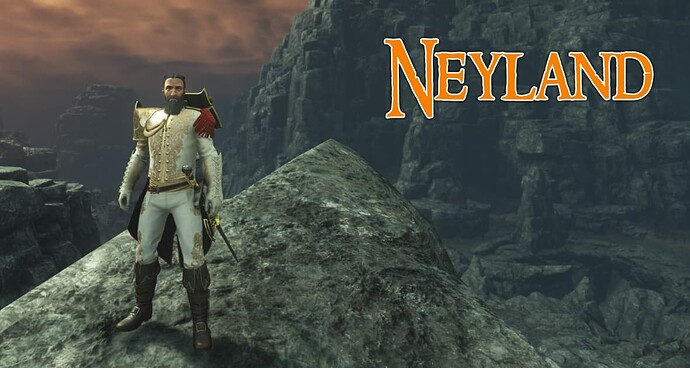 According to our archives Neyland been a member of OTG for 9 years. He joined in September of 2013.

At which store would you like to max-out your credit card?
Well, being that we have a policy to pay off all credit cards at the end of each month… But I’ll go with the spirit of the question and say I could do some serious shopping in a Bass Pro Shop.

What was your favorite TV show when growing up?
As a young man I’d say Batman with Adam West were in re-runs. Gilligan’s Island. Knight Rider. But as the 80s rolled in and I was entering my teenage years, it was all about MTV.

Choose a movie title for the story of your life.
King of the Sand Castle

What was your favorite toy as a kid?
Bike? As kids we spent most of our time outside. Football, baseball, soccer. We played war A LOT. Sometimes that was play guns or it could be woofle ball bats and trashcan lid shields.

How old is the oldest pair of shoes in your closet?
19 years old? Last pair of jungle boots issued to me in the Marine Corps.

Can you play any instruments?
Alto, Tenor, and Baritone sax.

What is the oldest thing in your refrigerator?
In the Fridge, probably the half bottle of mango daiquiri mixer from last summer. In the freezer, that unidentified thing wrapped in aluminum foil.

What is the nerdiest thing you do in your spare time?
This PC thing as a hobby? Read up on how to be better in a MMO video game. Listen to podcasts and read up on the latest vulnerabilities and active exploits.

What is your favorite cereal?
I like a good steel cut oatmeal with cinnamon and raisins. BUT, cold I’m going with Cinnamon Toast Crunch.

What, if anything, have you ever re-gifted?
Champagne (shudder). People bring champagne to the house for dinner parties and we never drink it. It gets passed on.

What was the worst punishment you received at school?
I guess you could call this a punishment. When I was in college I was pursuing a Business Management degree. Accounting I and II were required courses. Every time you registered for class you needed to have your course registration approved by faculty. I took Accounting I and didn’t want to take Accounting II the following semester so I requested to audit the course to sit in when I could to keep it in my head. I ended up never going to class. At the end of the semester I got my report card and found an “F” for Accounting II. When I took it to the school to say I had audited the class, they told me that I can’t audit the class and then take it for credit. The faculty member held no responsibilities. So my choice was to eat the F or change my major. I ended up eating the F.

What’s the strangest talent you have?
When given the opportunity, I can float on a raft in a pool until my skin gets all wrinkly and have no long term effects.

What was your childhood nickname?
Didn’t have one.

Do you have any strange phobias?
Nope

What, or who, are you a “closet” fan of?
As a family we watch Big Brother each summer. Some seasons have been better than others.

What are three things still left on your bucket list?
I’m not sure I really have a defined bucket list. I’ve never really thought about it. But here are two things I know I’d like to do some day: I want to take my family to Cortina, Italy. Beautiful area in the Italian Alps I visited as a kid and want to share that with them. Jet fighter fly along

If you could have any one superpower, which would you choose?
Let’s go with Quantum Manipulation. The ability to enter parallel universes or bubble universes, multiverses and alternate realities, open portals via vortices and boomtubes, dimensional voids and open wormholes and survive a black hole. Enter different timelines/realities/dimensions.

What is the worst pet you have ever had?
That stupid hermit crab.

welcome to the community

We’ve had 11 new or returning members join our in-game companies this month!

Please join me in welcoming the following new and/or returning members of our New World chapter:

This month we will be holding a giveaway / contest for members who want to share the best view they have captured in New World.

There are prizes for first through third place starting with a major combat trophy, 10k gold, and 5k gold cash prizes.

Details can be found in the contest thread here.

Please note that this contest prize is considered a Chapter Grand Prize (CGP). Eligibility to win a CGP is restricted to roster members of our in-game companies whome have been online in the last 14 days at time of a contest end. Winners may only win one (1) CGP per 90 days.

If you have tips or tricks that you think would be helpful to others, an idea for an article, a contest idea, news, or anyother content you think might be great for our newsletter then I want to hear from you! Please DM me and share your idea!
2 Likes