Will be putting the updates here.

This Weekend on Neverwinter PC!

Whether you’re looking to finally get the elusive stronghold gear or mayhaps a few extra enchantments, this 2x Seals weekend is sure to help. For those looking to level their professions, this 2x Professions weekend is just what you need to help you complete those tasks.

For those looking for some new company or just someone to watch your back, companions are 20% off this weekend.

Weekend Events begin Thursday, July 12 at 7:30am PT (or after maintenance)

Among the companions available in the Zen Market is the new Vistani Wanderer!

There’s magic in the air as the Wondrous Bazaar unveils its latest offerings! For a limited time, the Mysterious Crystal Charger will be for sale. This delicate horse-shaped crystal trinket offers players a chance to release one of five mounts with a random insignia upon shattering.

The crystal will begin sparkling on Thursday, July 19 at 7:30am PT on PC (or when maintenance is complete) and 10am PT on Console

Take a look at the five horses, which may charge into your possession.

Enchanted Courser – A favorite steed of mages throughout the Sword Coast, the enchanted courses shimmers and sparkles with a power of the magical energies used to summon it.

Full info plus screenshots can be found on the blog. 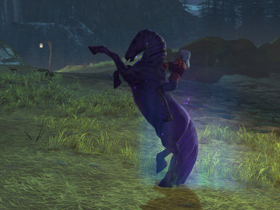 What wonders does the Mysterious Crystal Charger hold?

For all our PvP adventurers, 2x Glory will be turned on this weekend! Even for those who are trying out PvP for the first time, there’s no better time than now to start collecting gear. We also have a 20% sale on Glory Boosters!

Glory Booster: When used, this item grants the character a pool of 5,000 bonus Glory earned as an additional 30% of total Glory gained.

Greater Glory Booster: When used, this item grants the character a pool of 25,000 bonus Glory earned as an additional 30% of total Glory gained.

Want to extend the sweet benefits of VIP or looking to increase your VIP Rank? Lord Neverember has you covered with a limited time 15% off VIP!

In addition, during this time players can earn 2x the Stronghold Shards they normally would!

Adventurer’s Shard of Power – Obtained from Heroic Encounters and Campaign Daily quests from the Stronghold.

Conqueror’s Shard of Power – Obtained from PvP quests like Domination and Stronghold Siege from the Stronghold.

Dungeoneer’s Shard of Power – Obtained from Dungeon quests from the Stronghold.

Server down for maintence, no notes.

Found it, oddly it was on the forums instead of where it normally is on the blog

Neverwinter will undergo regular and extended maintenance throughout this month. The current maintenance schedule is as follows* (All times are Pacific time zone)

Tuesday, August 7
All Platforms: 5-9am (Expected downtime of 4 hours) When is this for me?

Thursday, August 9
All Platforms: 5am-12pm (Expected downtime of 7 hours) When is this for me?

Tuesday, August 28
Xbox One/PS4: 6-11am (Ravenloft launch maintenance) When is this for me?

*Maintenance schedule is subject to change. Any updates will be reflected on this thread if available.