Much WoT or mostly WoWS

Hi guys,
new to the clan, just wondering if many WoT players too, or is there more love for the ships?

My take on it is that there are more active warship than tank OTG’ers. For me, I’m in both OTG clans, but only infrequently take a tank out of the garage while I tool around the seas pretty much daily … but then most of that is chilling in the PvE Co-op Battle mode, so perhaps that’s why. More chill, less aggravation and misbehaving in chat in PvE, less stress overall.

My impression is also that those who are more competitive have found other clans with more of a focus on competitive play. There are membership benefits derived from being in the OTG naval clan, which most folks seem to take advantage of without the “pressure” of clan activity participation.

Wargaming does have the weekly clan Naval Battles, which are clan events but are based on individual weekend accomplishments that can be achieved solo without grouping. Only a few of us seem to enjoy it enough to toggle on the “Enable” switch to count our weekend battles towards the individual cap of 10, which is okay … the rewards are not lucrative enough to stress over, and in OTG we’re all about the “Laid back, not too serious, no drama … all about the fun!”.

Hi Falkenstein,
Many thanks for the info!
Yes I’m not up for compet stuff, been there before and waaay too much agro !
Ok cool, I’ll prob get it installed again, I’ve a few hours in game and so I have a few ships…but nothing top tier yet

Cool, sounds like you’ll fit right in to the OTG warships clan.

Wait, what? I feel like I am missing something here. I mean my play hours are well outside what other OTGers play. But if there’s something I can do solo I’m not doing I’d feel bad.

Wait, what? I feel like I am missing something here.

Earlier this year Wargaming introduced the weekly clan Naval Battles, which have two phases. The first phase is automatic, in that clan members automatically accumulate that week’s “base XP”, “ribbons”, or “damage” results to cross the threshold required for participation in that weekend’s second phase, the actual battles for stars. Each member gets 10 attempts over the weekend, so when a clan member is playing a ship that they want their attempt to count as one of their 10 tries, they toggle the “Count attempts” to “Enabled”: 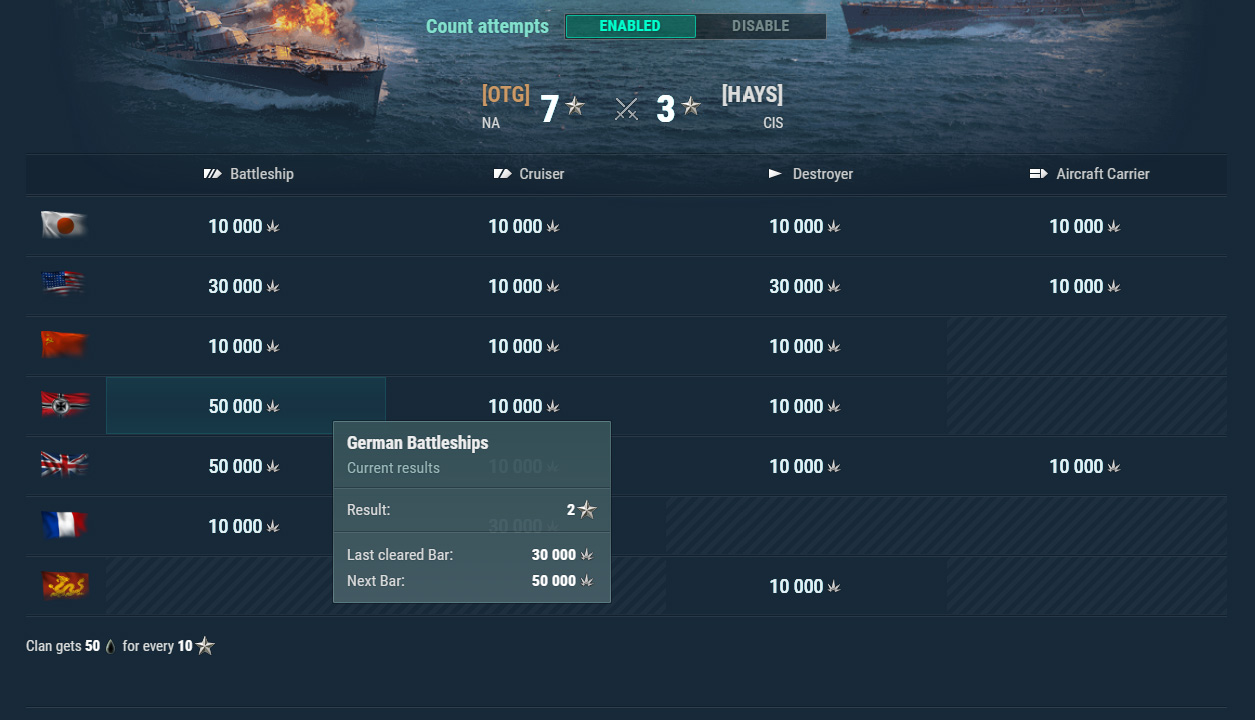 I’ve never seen that dialog before. You’d think that you’d enable it and it would take your 10 best.

Is the battle phase on the weekends the 7v7 mode? Because my playtime I rarely see anyone else so I doubt I can help there. But I can certainly try to find the above dialog to help with the qualification.

I would prefer your suggestion of 10 best, but I suppose their way makes it easier to see which categories still need achievable stars earned. The initial stars are easier to earn than the later ones when the thresholds become higher. For example, we don’t seem to have active CV players in OTG regularly farming the easy stars, but I’ve seen some folks later on the weekend, who have attempts left bring their carriers out and use them to try to snag the low threshold CV stars.

Is the battle phase on the weekends the 7v7 mode?

It’s you against the world to cross a threshold based on your results in the mode you choose, “missions can be completed on ships of any tier in Random, Co-op, and Ranked Battles”. I do mine solo queuing, and find that, personally:

I’m thinking that while the PvE “Co-operative Battle” mode is not a good fit for “base XP” Clan Naval Battle weeks, it seems to work out well for “ribbons” and “damage” weeks.

Unfortunately, if I end up as low tier, it can be difficult for someone like me to cross the required threshold, but I’m already committed for that attempt so I do the best I can, with the ships I have available. I do enjoy my Tier VIII ships, but not as much in Tier X matches, especially when trying to earn stars, heh!

Fortunately, the rewards are not lucrative enough to stress over, and in OTG we’re all about the “ Laid back, not too serious, no drama … all about the fun! ”

I’ll definitely take a look then. Given that I’m top of the list on 3 of the major metrics (WR, Avg. Damage, PR) it’s probably very bad for the clan that I am not participating in this.

Heh, heh, we can use you, no doubt! The matchmaker has been kind to us lately, but it’s not unusual for us to have categories that look reasonable for good players, such as the CV category often seems to be neglected by OTG.

This week looks like a “damage” week, we had a run where it was a string of “base XP” weeks. I’ll try my preferred Co-op Battle mode this weekend, for some relaxed PvE fun … but, the bots die fast to the team so I suspect the potential may be higher in PvP Random Battles than in the PvE Co-op, so the higher threshold stars may require PvP?

I can’t do much on the CV front. I hated CVs when they were RTS controls. I merely loathe them in the rework. I have a whole 1 CV battle from the RTS days and 12 from the rework.

On the other hand I drop several rounds a day in random PvP, focusing on T9 right now. Trying to unlock the Research Bureau.

Is WoWs a common night game?
i.e. got it loaded tonight, had a few games to warm up, people often around?

Depends on the time of night. I normally play 11pm-2am Pacific. Give or take a half hour here or there. I generally don’t see other OTGers on. Heck, for some T9 matches I don’t see full teams most times.

Falk did a great job of breaking down the naval battles.

Adding a few thoughts: Since i have several top tier ships i try to avoid using those for the low threshold numbers. It’s very easy to cross 300 XP with tier ten ships. I usually try to avoid those on the weekend and work the 2nd or 3rd threshold levels (ie 800/1200 xp breaks). My exceptions end up being CV’s (as Falk mentioned are rarely played) and Pan Asian DD’s (same reason). If I see entry thresholds that haven’t been unlocked by Sunday I try to clear them out if I have not used up all of my attempts.

Is there a wows disco room? Scolled up and down twice :s

I never saw one for either Wargaming chapter, tanks or warships. I was primarily looking for one for WoT, due to the “Frontline” mode that crops up every month for a week and thought joining up on voice comms might be good.

My sense of it is that what we mainly have now in both games, is that the OTG’ers who were actively grouping and looking to be more competitive have moved on to more active clans, and what OTG has are the benefits of a clan tag for those who prefer to mainly play solo?

Which, to be honest, my take on both Wargaming games is that they are multiplayer online games with two sides competing, but if viewed as a “team” game will lead to frustration … in the matches I get into, it’s rarely about playing as a team and working together to fulfill victory conditions, it’s mostly about enjoying a “shooter” experience without the First-Person Shooter play and pressure of the currently popular “battle royale” games with one survivor (or a small 2-3 person team of survivors).

There are definite benefits to being in a World of Warships clan, and the weekly clan Naval Battles are a low stress solo endeavor, I do like that getting in a poor match, or a poor performance on my part, doesn’t really impact the clan negatively, just personal frustration that I didn’t cross the threshold to earn a star for the clan with that attempt from my personal pool of 10. And, of course, with the matchmaker aspect there is no pressure to have folks participate, the rewards are not that lucrative anyway, and due to the increasing thresholds for stars it’s not like throwing more bodies and attempts will provide significantly improved rewards … it’s a good mode for OTG!

I’m sure we can easily request a channel. How many would use it? I’m game to division up with anyone. If you see me on and want to invite me up.

100% guys, I’m not after full clan battles… been there… done that… too much agro.

But I just presumed there was a room for people to platoon up. Get the grind done with a mate, have some banter, but still against randoms.

Was referring to Ranked Battles not Clan Battles. Divisions are the 3 ship groups. Message me up if you see me in game.

Is there a War gaming presence on OTG Discord? I’ve been playing mostly WoWS, but have been recently given WoT another try, after having played it for 5 years and quitting about 2017. I guess I could go visit Discord and see who is there. .