For those of us budgeting for the holidays in preparation of potential deals and sales (I currently have Massachusetts B, Enterprise, and Wichita on my short list), buried in today’s Update 0.8.10: “Resolute and Rapid” notes are some items that I found of interest:

IX Alaska B, and

VIII Graf Zeppelin B. Besides that, for all Black ships including those from last year, we added commemorative flags, Commanders, patches, and backgrounds. Details on how to receive them will be published on the website.

Scharnhorst may be my favorite ship, it’s one of the few that I take into Random Battles (PvP), not just my preferred Co-op Battle (PvE) mode … I’m not sure I need a different color scheme for it, tho.

I’m hoping that Massachusetts B makes a return appearance in the shop (since it’s already part of the client, it doesn’t need inclusion in the update as new content like this year’s Black ships do), and the mention of a commemorative flag for it does makes me think “bundle” and that the ship will also be available.

I didn’t grab a Graf Zeppelin earlier, might grab one now.

Hmmm, I need to consider branching out into carriers. Since I mainly play the PvE Co-op Battle mode, hopefully my teammates won’t be too aggravated at me bringing a CV … the PvP Random Battle mode can sometimes be toxic so I’d be reluctant to subject myself, and my teammates, to a match with our side hampered by my CV skills.

FWIW, I did find last year’s 2018 Black Friday in World of Warships: Huge Discounts! post. Alas, the offers are closed so the prices are gone, but the ships are shown. Could buy them individually or bundled for a discount:

(I currently have Massachusetts B, Enterprise, and Wichita on my short list)

As I mentioned above, Scharnhorst may be my favorite ship, so with today’s Update and the addition of

VIII Odin to the testing mix I’m keeping an eye on Odin making it onto my short list. From what I’ve seen, it’s being positioned as a Tier VIII Scharnhorst, so I’m interested. I do enjoy the German BBs, but with their shell dispersion, and my understanding of the current meta not supporting their strength in brawling, not sure I “need” another German BB in Tier VIII matchmaking … the Scharnhorst being low tier against Tier IX ships seems more enjoyable than the Bismarck being low tier in Tier X matches, for me.

However, since I prefer to just take the Tier VIII Bismarck into the PvE Co-op Battle mode, and not the PvP Random Battles where I do take the Tier VII Scharnhorst, no doubt I’ll just go ahead and pick up the

VIII Odin and enjoy it in PvE, as well.

The following ships have been added for testing by developers, supertesters, and community contributors:

I didn’t grab a Graf Zeppelin earlier, might grab one now.

FWIW, @thesuperles , I had Mr__Gibbins twitch stream on the second monitor, and evidently someone asked his thoughts on the Graf Zeppelin B, and for him he said he wouldn’t recommend it, that he personally found the Graf Zeppelin the most frustrating of the premium aircraft carriers to play.

I don’t know if the CVs and AA are still being looked at, or not. I know they were earlier getting revamped, and then the Enterprise left the shop, which has aggravated some folks because evidently Wargaming had stated in the past that there would be an announcement prior to premiums leaving, allowing folks the opportunity to grab them before they left. I’m a bit shocked that the Enterprise did not return with Midway now in theaters, it seems like a big lost opportunity for them, and makes me wonder about the status of the Enterprise and the CV rework.

I know that I’ve yet to play CVs, personally, but I did want the Enterprise in my port.

Do have Atago? What is it like to captain around?

According to “LittleWhiteMouse” (whose reviews I’m a fan of), the Atago is a “Gudbote”, with “Quick Summary: An IJN Heavy cruiser with a unique torpedo arrangement. She is very fast, very stealthy and surprisingly durable, all while keeping the heavy broadside firepower of ten 203mm rifles.”

Tier for tier, the Atago is potentially an incredibly powerful cruiser, but only in the right hands. She’s not forgiving. In the hands of a novice player, she can be frustrating. She’s unique in her combination of speed, stealth and firepower. If used properly, she will pay you handsomely with experience and credits. Used poorly, she’ll send you back to port with little to show for it.

I honestly believe she’s a little too good to be a premium vessel, especially once her captain is fully trained. She fills a unique role that’s not matched by anything except perhaps a Soviet Destroyer – and that doesn’t manage it quite with the same furor that an Atago does. Between speed, stealth and firepower, she’s the perfect vessel for players who like to hunt as a lone wolf for vulnerable ships. Her Repair Party means that what little damage she takes from picking on Destroyers or crippled warships is healed back, keeping her fresh for far longer.

It’s not that she doesn’t have her weaknesses. Her durability just isn’t there when she’s focused. She can be one-shot by a well aimed Battleship salvo and crippled by the same from a cruiser. She doesn’t do well against attack planes. But these aren’t enough to offset just how good she can be in my opinion. Performance wise, she sits in a nice happy medium ranking among all of the tier 8 cruisers. Do not let this fool you. If you fancy yourself an expert and enjoy the IJN Heavy Cruisers, you will find the Atago not only to be a comfortable fit but a pleasure.

Kitted out for anti-destroyer work, my Atago in Ranked Battles is a dream machine.

I love this ship. I cannot stress that enough. She’s well worth her price. There’s nothing ‘wrong’ with the Atago if the cost isn’t a concern of yours. Be aware that unlike the Myoko or the Mogami, she doesn’t have the same versatility. Her lack of AA power makes her a more specialized vessel, good at hunting, killing – not so much protecting and escorting.

Looks like the EU website has already put up their events for the USA Thanksgiving, but not the NA webiste, heh!

Items of interest, for me, is that Part 1 and Part 3 reward a 2018 container, but it’s not a hard requirement to wait on buying from the shop, to see if get gifted the Massachusetts B from the container, “If a ship you already have is dropped, it will be replaced with a different ship that you do not already own.” 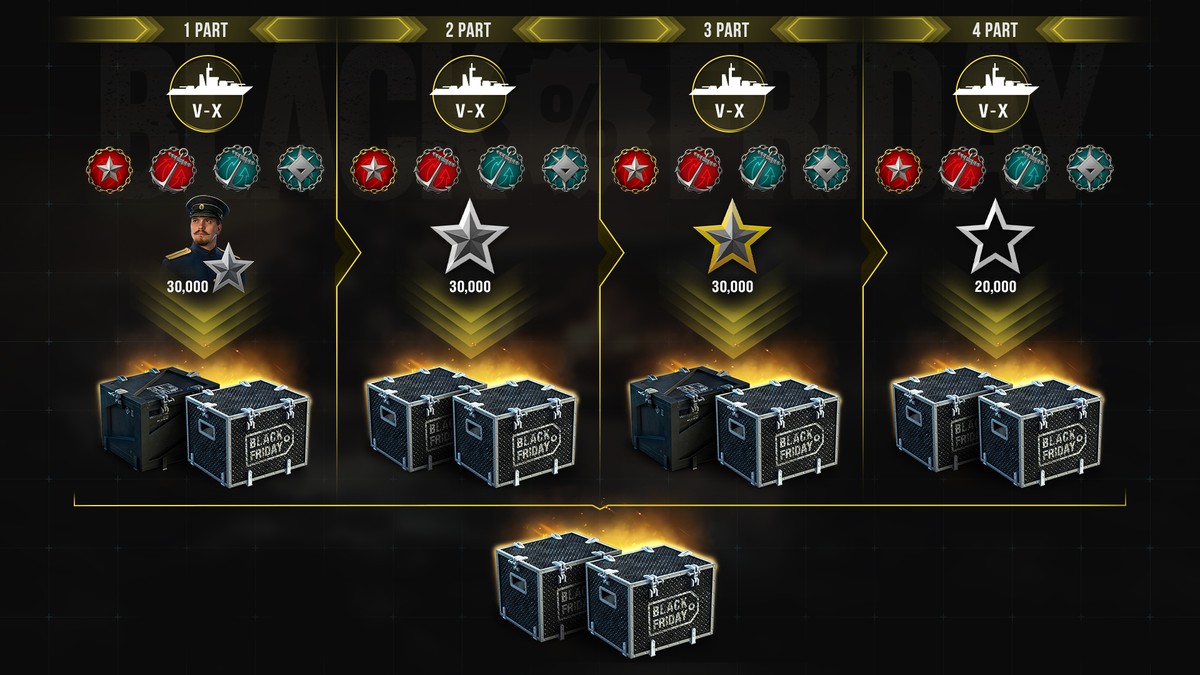 And, here we are, Black Friday “Black” ships on discount!

I then picked up the

FWIW, LittleWhiteMouse has an updated thread on the available Black ships at “Mouse’s Little White Christmas Review 2019 #1 - Eight Bees”, where she talks about the available ships in the context of the current meta, which may be different from when her comprehensive individual reviews were done.

Very yes on toast . Massachusetts is one of the safest premium purchases you can make in the game right now. She can be used as a traditional American battleship trainer or you can choose to specialize a Massachusetts-specific commander for the extra luls.

So there we have it, some quick updates for you. The summary is this (assuming you don’t already have a non-Black version of these ships):

If you already do have these ships and you’re just out to collect some fancy looks for some of your favourites then let’s not pretend that my recommendation is going to sell you one way or another. I sadly do not have any details on the odds of the Black Friday crates, so be especially careful with how you spend your money this holiday season.

Got lucky with the 250 doubloon box. Got a Scharnhorst. Still debating the Graf Zepplin.

Congrats on Scharnhorst! I would think that the CV rework, before finished, would include giving some love to Graf Zeppelin and allowing Enterprise to make it back to the shop … I’m amazed that they were not able to bring Enterprise back when the movie “Midway” hit the theaters, though, so maybe I’m wrong.

How is the Tirpitz “Conditional”? It’s a Bismark with torps, which are the only thing that ship is missing. SO disagree with that…

How is the Tirpitz “Conditional”? …

She explains her reasoning in the post, such as the meta has moved on, the introduction of Massachusetts has taken some of the limelight from her secondaries, and the CV players actively looking to focus German BBs has impacted the fun. The good news is that on the test server Wargaming is looking to buff the German dispersion as we speak, recognizing that the German BBs have been left a bit behind as the game and meta has changed.

Yes but with a big ol’ butt . Tirpitz still has it where it counts but she’s not the solid performer she once was. Scharnhorst is the better buy, tier for tier, there’s no question there.