I’m thinking of going to linux for gaming what do yall think? have y’all tried this? Pro/Cons and do y’all have any thoughts on this?

Install it on a USB and try it;

Me until it exceeds windows not yet.

Ohai! Linux user here. I did Linux gaming for a long while. I played through most of Guild Wars 2 on Linux. Currently I’m doing streaming to my Linux laptop from a (mostly) headless Windows machine. Here’s my take.

If I had my druthers, I wouldn’t have a single Windows install. I think it’s a bloated OS which makes me feel like I don’t really own my machine (e.g. ads in the start menu, needing accounts with hardware vendors just to get drivers, not knowing what information is being sent back to MS, etc.). I just don’t like Windows.

I finally broke down and installed Windows on a machine and shoved it in a closet for a couple of reasons. I felt like I was spending too much time fiddling with Wine (I used PlayOnLinux) to get games working, and then – especially with MMOs – the games would just break again in the next patch. But more importantly, there were some games I wanted to play that I just couldn’t get working in Wine.

My read on the industry is that Valve is committed to gaming on Linux, and that they’re doing some of the hard work necessary to help Linux become a first-class gaming citizen. Their financial interests seem aligned to supporting Linux, so that suggests to me that this support will continue. Hopefully their efforts at getting games without first-class Linux support to run under Linux continue to mature.

But for now, for this gamer, I have that stupid Windows box in the closet. And the streaming sometimes sucks. But the streaming is easier to fix than the game even running. I look forward to the day when I can get rid of that install.

Best thing to do is look at your steam library and see what you own that is compatible. Also looking at your wishlists would help too. Then you can see if the switch over will be worthwhile.

Most of the RTS I have are supported, so I enjoyed Linux gaming!

I am running Ubuntu 19.04 and have had a generally positive experience! Proton makes it very easy to enjoy the benefits of WINE with out having to mess with any configs.

Honestly,if you expect to play every AAA game that comes out on release day… You may want to wait. I have not been happy with many AAA devs in years and have been playing games in a /r/patientgamer style. the Proton DB lists many games and their compatibility.

hope this is not considered forum necromancy.

linux got super attractive for me currently for my next pc to switch just mainly to it for all purposes.
most games i like to play seem to run on linux now and other software also.
i give myself about a year to get comfy with the os and i am curious if i could get other input for a good handbook on debian or ubuntu for a total beginner.

I swapped over to full linux a few years ago with the end of support for windows7, after having seen what they were doing with 10… And now with 11?! Good Lord… Anyway, Valve has been leading the charge of popularizing Linux gaming for a while now with ProtonDB (I’d recommended using the custom version from GloriousEggroll, Proton-GE). Lutris is also a fantastic application for getting non-steam games working. 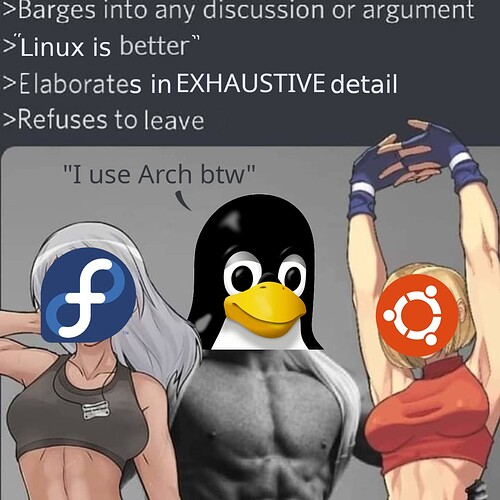 manjaro here - still learning more about it but that will be an ongoing process. i was shocked positively that i did not have to have any knowledge about linux to start using it for everything even games hardly crash anymore thanks to proton.

what do you play j-p?

I’m also on Manjaro. I mostly play older games like Track Mania Nations Forever, Fallout New Vegas, and the first GuildWars along with a few others that I pop in and out of. I can also get GW2 to run through Lutris, but my hardware is a bit dated. Surprisingly I got Elite:Dangerous to run really easy.

elite: dangerous just needs some more time in the proton oven probably, should not take too long from now.

No Mans Sky as well… I got it to run using the custom “Proton-GE”… its kind of a pain in the ass to get set up the first time but they made a GUI for it recently and it’s gotten a lot easier.

thats odd no man’s sky runs flawless for me with experimental proton
pretty much everything that is steam deck verified seems to run buttersmooth for me.

got the rift breaker for fun and thats not supported and even that seems to run nice enough after some launch options. super fun casual game btw.