Just finished my new pc build and yes that included a new GPU thank god. Working out the last issue with trying to get the memory xmp profile to hold but have worked out all the other issues. Switching from nvidia to radeon was weird but not bad. Will post build process pics if anyone is interested. 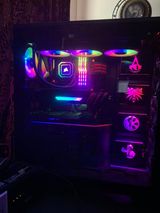 This pc started out as an Origin PC millennium in 2015. in 2016 I upgraded the gpu from 970 SLI to an single 1080. Then in 2019 I had origin upgrade the motherboard, cpu, OS drive, memory and water cooling. And now the only part left from the 2015 Origin PC Millenium is the Corsair 1000 watt RM psu. i broke the x470 gigabyte ultra gaming mobo i purchased in 2019 with a Gigabyte x570 master. I kept the 2700x for now. I replaced the 16x2 3200mhz memory corsair dominator platinum memory with Gskill Trident Z Royal 4x8, 3600mhz memory. Swapped the 2 nvme drives over and replaced the Nvidia gtc 1080 with an ASRock Radeon 6900XT Phantom. I also repalced the origin pc millenium case with a Phantek Enthoo 2 pro case and added 11 Corsair ML120 fans.

@Manahotep I saw your post on your PC Build. Check mine out:
https://drive.google.com/drive/folders/16a7A81Wlr6CDYDogFJrnYDI3gFJWvUes?usp=sharing

Loving those lan li strimmer cables. Planning on getting myself some. Great looking system, nicely done. I would remove the stick on wire tie downs and either hide the shiny black power cables coming out of the psu by making a shroud or having a backlit custom plate made by JMMods? or upgrade to sleeved. Can you change the color in the case to one not so bright so it photographs better? Some cool stuff is a bit washed out.