With each patch we get one or two features or aspects of the game that become the hot topic for a while.
Previously the flight model was a big one.

This time around it is Hover Mode and the new Law system. I wont touch on the law system yet, I want to gather some more info first. But here is some helpful info to get you into the game using the new hover mode without pulling your hair out…much.

In case you were wondering, no there is no way to toggle it on and off. It automatically engages when your ship slows down to a point where it cannot create enough lift to keep it aloft. That is when Hover kicks in and you are in something like helicopter mode. Tilting forward will move you forward. Tilting back will move you backward. So on and so forth. So it is important to make small adjustments, not jerk the stick back and forth in big movements.

So here is what you need to know about Hover:

First, understand that the new hover mode forces you to recognize that you are flying tons of steel not a paper airplane. You cannot come in at full speed and plop down on the flight deck any longer. You must be very deliberate about your movements and make fine adjustments to your landing and takeoff.

Second, learn to use the speed limiter. It is your best friend when hover mode is engaged. I always start it at absolute min before trying to land or take off. It might also help to adjust the acceleration limiter to about 30% the first few times you try landing or taking off. Eventually you can raise that until it is at 100% once you get used to the process of using Hover mode.

Finally, and this is important, remember that this is just a single iteration of a long term implementation of a system that will be in the final game. This is NOT representative of the final hover mechanic. Work with what you have, record what is good and bad and offer feedback here. CIG wants to know what you think so be sure to be mature and offer constructive feedback.

I have found that taking it slow is the key to successfully making use of hover mode.

Hope that helps any pilots out there who are trying out 3.6 for the first time. As always if you have any questions I am happy to answer them to the best of my ability.

Have fun, fly safe and I will see ya’ll 'round the verse!

Thanks. For those having issues with hover mode, like me when slowly moving in and trying to land and then suddenly accelerated into the ground/wall, have a look at this post.

Keep in mind some ships are just bugged right now and will accelerate very quickly when in hover mode. Not anything the pilot can do really, other than make VERY VERY small adjustments to both speed and pitch/yaw/roll

Yep, so I have noticed: with only a speed of 2-3 landing in Levski, suddenly slammed into the wall of the landing bay, waking up in Grim (hope they change that some time)…

Well they certainly aren’t going to leave it that way, lol.

But yes let’s hope it is sooner than later

But SPEED LIMITER??? I use a joystick. A W S D for landing control seems contra-indicated now, and X for space brake does it’s own thing altogether.

Is speed limiter in the keyboard mapping?

And yeah, If I’ve made it to ARCCORP and die on the landing pod, it seems I SHOULD awaken in ARCCORP. Sooner rather then Later. Like 3.6.1

It seems you can use your middle mouse button for that as well: 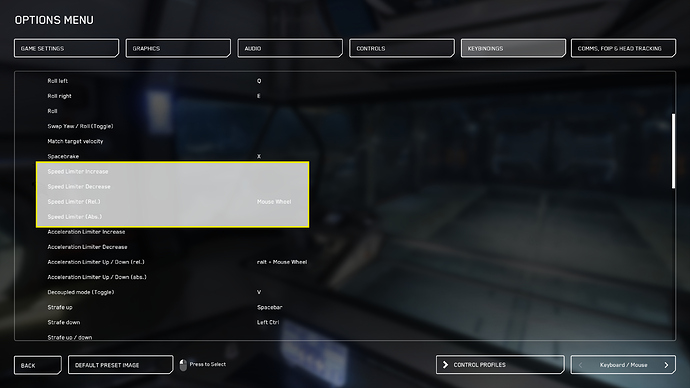 There is no standard mapping for a joystick, you will have to do that yourself I am afraid, if you still have room to allocate some buttons.