Hi, just wondering if it would be possible to have the hunter gatherer purchased in the Halls of Fate guild hall.
I enjoy doing the 3 daily gathering quest in the new zones.
Happy to help with the upkeep of the purchase.
Regards Kaine.

We have what the game offers, the only thing I know of that produces the new mats is the plant from OF.
Briyad

There are three gatherer amenities, the hunter being the third one unless something has changed. Just as the two we have by the box offer quests, the hunter gatherer does as well as noted here: 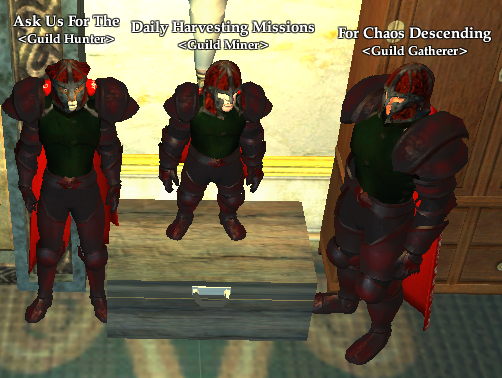 Adventures, please see the Chaos Descending Timeline. Note: Some quests require you to harvest materials as part of the quest. The harvested materials have not been included in these totals.

What does this information mean? This quest resets every 18 hours.

I assume this is what Kaine is referring to in mentioning the three daily quests where the 3 gatherer types would each grant one of the quests?

I am still playing plenty of catch up but since I did not understand what Kaine was talking about, not having done these yet, I looked them up and the above info is what I found. Hope it’s helpful.

Edit: Oh, and please correct me if this isn’t right in some way. Thanks!

There is a tradeskill timeline which requires harvesting to complete different parts. I get only 1 daily ts quest, the zones change with each day. I have not seen anything about 3 daily quests for harvesting.

The guild is maxed out on amenities - we’d need to remove one to get the hunter hireling. We need to strongly consider doing this, though, as it is the only way to get these quests.

I’ve also updated the sign in front of the existing hirelings to request they NOT be sent out to harvest, as the quests are not available when they are out. The depot is maxed out on many materials, anyway.

Hi, gatherers give out a daily quest as well for new zones.

Guildhall Harvesters will offer harvesting missions. Thus far, there are no other quest givers for these missions, so if your harvesters are busy harvesting, too bad, so sad, you can’t get the missions, but there is always tomorrow my swain. These quests reset every 18 hours.

I am assuming from your reply Trisc that you didn’t have time to read the links I posted, not that I blame you by the way. There are 3 harvesting daily missions in current content and these 3 missions are granted one each by the 3 harvester amenities.

These harvesting quests are in addtion to the daily TS missions that open upon completion of the TS signature questline you mentioned which happen to also involve harvesting apparently.

If you scroll down past the TS dailies available every 18 hours on the wiki page I linked above, you will see the details on the harvesting missions granted by the three harvester amenities.

Does the guy that gives a 5% buff to mount speed do anything else of any use? If not, there’s one candidate that might be considered for removal.

At any rate, I don’t even have a vested interest in this at the moment personally and probably won’t for a while. So I just mean to be helpful in linking stuff and trying to clarify what I’ve learned in looking it up.

Actually Rosy, the depot is hurtin’ for certain across multiple tiers for ores, as in so low a single crafter could not progress through the tier with one crafting skill without running out early on. This is why when I am on (often) in the middle of the night and either nobody else is, or one or two are out doing solo instances or whatnot, I do send them out trying to cover those tiers. I do not send them out otherwise now since I saw the posted sign.

Rhenium ore is one I was working on as we had next to none. I haven’t checked recently to verify where that and a few others are but just do a search on ores to see what I mean. They must be used in many different recipes to be so low vs other stuff although at least one provisioner harvest needed for writs leveling was also completely out when thankfully you helped me since I didn’t have a character high enough at the time to go harvest the stuff.

That’s just FYI as my next question is, if the guild leadership wants to prioritize those quests to the 24/7 exclusion of any further harvest runs until further notice, so be it. I am not going to offer any opinion about guild priorities myself for anything.

All about the fun as we say…

Thanks, Kaid, for calling this to my attention.

As long as these hirelings are the only way to get the harvest quests, it is my opinion they need to be available to give the quests. Ginz and Rum, if you feel otherwise, please let us know.

I did look at ores in the guild hall harvest depot, however, the only common material I am seeing with a low number is the rhenium, as you noted. I “borrowed” more from All for One guild and my own harvest depot, so we have over 10K rhenium ore at the moment…

The guild depots are not intended (again, my opinion) to supply all the materials needed for leveling up every crafter. There are tradeskill quests that also give experience, and harvesting quests such as the Gathering Obsession and Shipwrecked! timelines to help a toon level up harvest skills and also provide mats for tradeskill recipes.

Although I average about 350p a month on fuel out of my own pocket (no worries - I can afford it, and I am happy to support the guild this way), it is appreciated when members replace mats and fuel when they are able.

On a related note, if anyone in the guild needs a set of depots for their home, please let me know. I’d be glad to make them.

That’s very kind of you Rosy but that was just an FYI regarding the box. Multiple ores were in the low 100’s quantity a few months ago. I have been working on them since up until the sign regarding the quests was posted. As for rhenium, I have rhenium for my own needs already, I did not mean that I wanted it in there for me. I don’t need anything in that box.

I want to clarify something. Speaking just for myself, I do not feel entitled to anything from the guild, be it harvest resources or anything else. I want to make that crystal clear. I took on restocking certain harvests in the box as a little project soon after coming back three months ago when I saw how low some of them were. Realizing how much has changed over the years, I also set about taking care of my own needs concurrently but outside of the guild hall. To that end, I created a workshop with all of the crafting stations and I made with my max level tinkerer (Lyolas who was once my main) all of the depots you can make and then I set about filling up the harvests and fuel depots, etc. I both harvested for entire days with Lyolas like I used to years ago and did gathering obsession quests with alts and of course, sent out my nine goblins constantly. Now I have one pack pony as well. I have been very busy working for the stuff I want because nobody owes me anything. I owe me if i want something. I like doing all of it too. It’s fun. So I don’t need rhenium, the guild harvest box, free fuel or anything else. I am just here to have fun with a nice group of people here for the same thing. That’s all.

With that all said, I won’t touch the harvest amenities again. For what it’s worth, I look forward to doing the quests they offer in the near future when I do what is prerequisite to getting those quests daily. I have always loved harvesting. It reminds me of fishing. Being off by myself doing that is very relaxing to me which I guess is why it doesn’t bother me at all to spend an entire day at it, just wandering around in the beautiful, peaceful world of Norrath.

Appreciate your efforts to help fill the guild harvest depot, Kaid! It wasn’t until the last week or so that it was realized these hirelings were the only way to get the harvest quests; last xpac they were also available from an NPC.

I, too, have a crafting house, and probably most long-term players do. My offer to make depots for any guildie who needs them still stands.

Hi Rosyposy, would you make me one please. What materials do you need?
Regards Kaine

Certainly! Do you want specific depots or a whole set? They take level 80 rares, however, as long as I have them I don’t mind sharing.

Come to think of it, Rosyposy (not in OTG) is holding a set of depots that I made to take to beta. I’d be glad to have you help clear out her bags.

I tried to replace some mats that I had used and it wouldn’t take them! Box was full again!

It mainly depends on who is using which lvl mats. So if you are using a certain one, then it should let you replace it, or maybe you tried to put too many back in the box.
Briyad

The Harvest Depot is indeed maxed out on some mats. As far as I am concerned, whoever unburdens the hirelings and sends them out again can keep the excess mats.

I filter my recipe book to Shipwrecked / amalgamations to see which tier needs mats overall before sending them out. Another way to do it is to search for material and see which level is the lowest.

I’m glad we can both send them out and get the harvesting quests now.