As of tonight 7/17/2018 @ 8:35PM PST, Blizzard turned off the Communities feature due to bugs. It will be re-enabled at a later date when they work out the issues.

Thanks for the info.

Welcome to the WOW beta! We thank you for your monthly payment.

To be fair it isn’t like they raised the price of the monthly subscription and this is a new feature that is being introduced, not an old feature that got bugged and removed. IE, the fact that it isn’t here today is exactly the same situation we were in yesterday when it didn’t even exist, all for the same price.

I’m pretty sure they are live now. Looking forward to the OTG one going up, I don’t think I play on the same server as anyone

Seems to be back up now…

Alliance is on Anvilmar/Undermine. Horde is on Kul Tiras/Bladefist. Hope one of those works for you.

Communities are cross-faction though; so I was curious if we were going to have one setup for >everybody< …

I believe communities are faction-specific, but battle.net groups (on the launcher social page) are cross-faction…

Are they not the same thing? I just joined a twitch streamer community to test.

to add on to my above post: joining that community/group in the game client has successfully shown it on “Groups” tab in the launcher…so I think they are called two different things but are in fact the same thing…

Although I am currently in game and in a community, but I don’t belong to any cross-faction groups… see here… it’s the same thing I see in game: 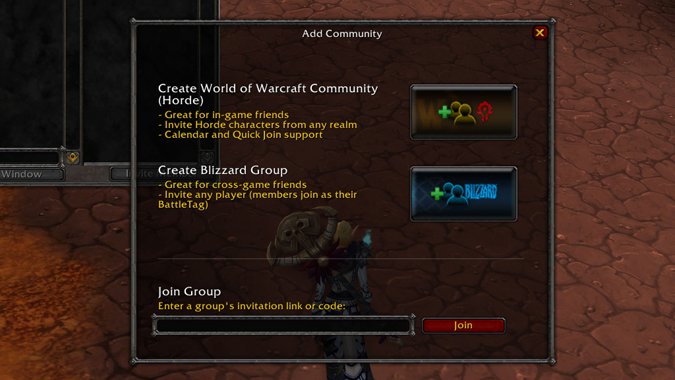 Global strings for in-game communities were added in a recent alpha build, along with very limited functionality of the system. We first heard about the new communities last year at BlizzCon.  Communities are a feature intended to update our social...

Not denying they are the same; I just don’t think they are faction-specific. I’m talking to a few people for example that are on horde watching this girl stream…shrugs

And I joined it by going through the in-game “JOin community” thing.

EDIT: Though because I don’t actually know them…I can only take their words that they are playing horde side while chatting with me on it.

Horde are working on something(s). We will release details once we are more sure about what we are doing

My understanding is that 'Communities" are faction specific and “Battlenet” can be cross faction.

The battlenet setup might b useful for those who don’t mind sharing b’net ids and be a form of cross-faction.

I’m on Frostmane for horde and gorgonnash for alliance. I’ve been on frostmane since I started playing in bc, so hoping the communities create some more cross play between servers

I am all for at least one battlenet community for us to use. Just my .02 worth there.

I think the idea of a battle net community where horde and ally can chat with each other is amazing.

As far as I understand things, a community is same faction, cross server. So OTG members that aren’t in the OTG guilds can become part of the OTG community on each faction.

A battle net community is just that. Its cross faction, its cross blizzard games. Horde and Ally and… more can chat with each other in a huge OTG community. However, I’m not wanting to give out my bnet ID to do it. I’m hoping as we learn more about what we can and can’t do with our communities, we find that is less of a concern.

The communities are back up and WoW staff members in both factions are discussing what we want and do not want to do. Giving out BNet IDs out is not on anyone’s list to do.

Right now Alliance is continuing to use Greenwall. Both sides have snagged any names (Old Timers Guild, OTG, etc). The Alliance is currently using our OTG community. Only Nawtynurse and I are in the other communities.

We are still evaluating the efficiency of the community feature. It does require each member to be given a code to join the channel. Although there may be an invite option, which I have not yet fully explored. On the other hand, Greenwall simply needs to be enabled in order to work. Because the cross-faction does not work inherently, I’m not sure what we gain by using the community. We shall see.

On the other hand, Greenwall simply needs to be enabled in order to work. Because the cross-faction does not work inherently, I’m not sure what we gain by using the community.

Are communities by Battle.net ID and not toon? If so, what we gain is the ability for people who have unguilded toons to still be able to communicate with the larger guild.