Just received word that my niece and her family are safely out of harms way. They live in Stayton, OR and evacuated earlier this morning, moving in with my sister who lives in Salem, OR. My sister included a picture of the sky in her area and it looks like an old sepia photograph. This is a view from her front porch looking out past her driveway.

The kids left Stayton when it was a level 2 fire danger not wanting to wait until level 3 was declared. It has been a strange day, to say the least. Sunrise was at 6:45 am and it did not get light enough to turn off my dawn to dusk outside light until about 8:30 am. The light outside looks like a sepia photo.

I hope anyone in that area is safe and wish you all well. 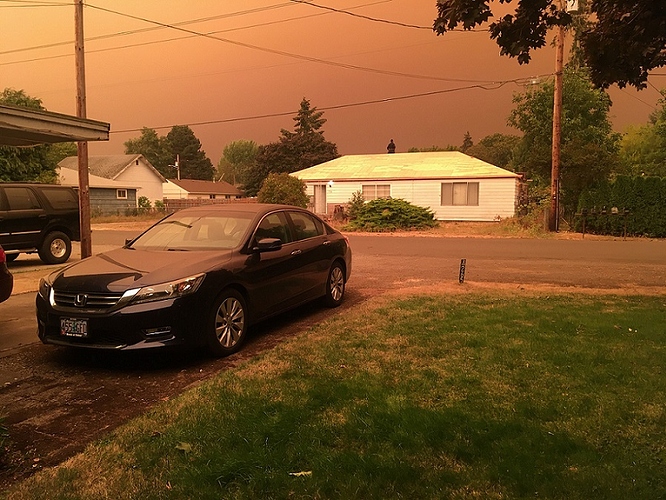 I live in Lincoln City, Or., and the smoke here is unreal… Woke yesterday darkness (no power) and a sky so orange that it felt like the Poxyclipsch! We have power today and the winds have shifted but a rural town named Otis is in stage 3 evacuations and they are training livestock west on hwy 18… The Stayon fire as I understand it a far worse… From the Santiam pass west to Stayon is all in stage 3 as the fire is raging thru the canyon.

Crazy wildfires here in California too. Sky is orange, but it is not smokey, all the smoke is up in the atmosphere blocking out the sun.

Everyone in that area on the West Coast, please stay safe…

Yes, indeed, stay safe. Also take some fake “Vacation to Mars” pictures when you can.

Here’s a pic our son sent from Salem, OR of his front yard. 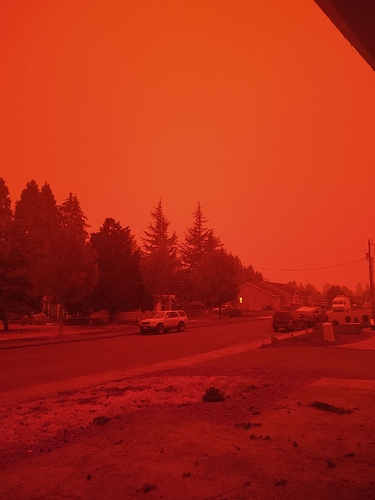 My sister lives in Salem too. Right now her eldest daughter and her family are with her because they had to evacuate their own place.

My sister lives on Hager Street…not sure how far away that is from where your son lives, but its in Salem.

Just got home from a 13 run from Newport east on 20 to 99w, thru Dallas, north to McMinville, Newberg, Gresham, Gladstone.

My… how half a day has changed the tone here. 53 degrees, power is back on, hospital is reopening.

Greatful to all the Fire Fighters, Police and ODOT for keeping us well updated and safe. 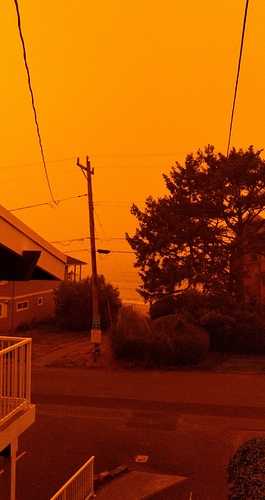 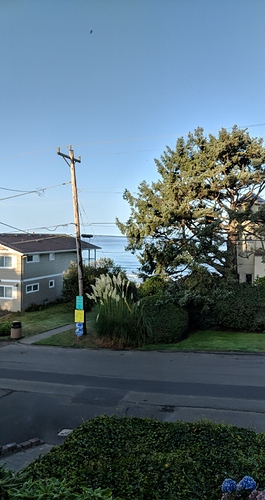 Now I wish I had taken some pictures Wednesday morning here in California. It was quarter to seven when I was heading to work and I had to look at my phone to double check the time as it was still very dark, but like @Tradecraft photo above everything had an eerie red cast to it. At seeing it was almost seven and not almost six I thought ‘great the zombie apocalypse is beginning’.

I’m not close to where the fires are but in the valley where its a bit smokey and no point to washing cars as it will be lightly covered in ash in a few hours. My family does have a cabin that was (and perhaps still is) in danger of burning, but the forest service and fire crews started some backfires in the area and so far that has worked to keep the main fire away from many of the cabins in the area.

Am finally feeling less anxious for my sisters and their families. I got a text this morning that my middle sister, Sandy, who texted: “Both girls are now down to level 1. a) Danielle and Carl did not have to evacuate. b) Krista’s family went to their house this morning (today) and it was still so smoky inside they could not stay more than an hour or so. Will continue to stay here until their home is habitable again.”

My youngest sister, so far, is still on alert in Federal Way, WA. No news from her is good news because she is out of the way from the majority of the fires and was only on alert. Did not have to evacuate her place.

I wish everyone else who has family or are living in or near those areas are safe. My thoughts are with you all.

I live here in Oregon as well, it has been crazy, the Halloween colors in the sky and the smoke wafting in the air. Smells like someone smoked in the house recently, the garage smells like an active campfire, going outside I can taste the air, it leaves a metallic tinge on the tip of my tongue. Supposedly going to get some rain later this week, I really hope we do.

I certainly hope it does rain and enough to help clear the air. But its going to be a while before anything is back to “normal” for anyone these days.

The Prayer Warriors are out in force.

My Sister, Niece & nephew’s families are in Silverton & Brother in Salem. Been evacuated since last Wednesday. So far their homes have been spared, but filled with smoke.
Brother very ill with COPD. I know he won’t stay inside.

Hoping everyone is SAFE & out of harms way.

Special thoughts for your brother ill with Copd…hope for speedy recovery.

Sky above my brother Gerry’s place in Oregon. Nearest fire was 13 km away. 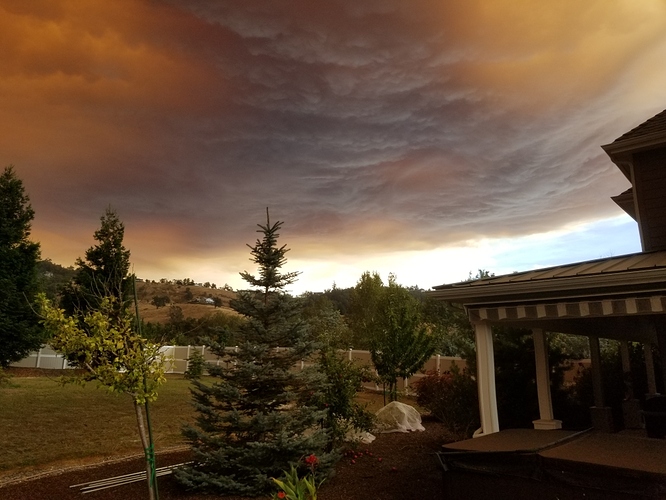 My Sister & Nephew are back in their homes as of yesterday. Dealing with SMOKE.

Don’t think anyone is really out of the woods yet. Prayers for ALL affected

Yea…smoke damage is going to be a big deal going forward. Especially for those with respiratory problems.

No news from my sisters yet but no news on their side is good news for me. At least I don’t have to worry about them. If anything were amiss I would have already heard back either with an email, phone call of text.

So that is a positive in all this.

Hope everyone is happy and (reasonably) healthy by now. Sorry I didn’t find this thread sooner…I had a few stories too, although nothing quite as bad. I’m in Oregon City and we got up to stage 2 evac notice so I had everything gathered up and the car mostly loaded with no idea where I would go. Then the smoke settled in the ‘dangerous’ or extreme or whatever the bad rating was. I couldn’t see the treetops across the street. We had all the orange skies prior to that and I’m sorry (and kinda glad) I didn’t get any photos. Over time they reduced the fire warnings and they saved Estacada as well.
Years ago I had to go help fight a forest fire and after that experience I have nothing but admiration and respect for the guys on the line who do it for a living. Not only is it hard work (which I like a avoid when possible) but its scary. We had trees torching very close to us…it’s just like someone lighting a match and ‘woof!’ tree is burning and almost black already. We had planes flying over dropping slurry and a chopper getting scoops of water out of the nearby river. Lucky for us we had it mostly wrapped up after about eight hours so I can’t imagine the nightmare of these conflagrations that cover miles and miles with no end in sight.
Anyway, that’s my tale and to you fellow Oregonians…stay out of downtown Portland! Just kidding (sort of).