As you know there are now NPCs, which feels fairly normal to me as compared to F4. Just outside the vault I talked to a Codsworth like robot, who gave me an Overseers holotape, then down the hill, 2 NPCs wondering about the treasure in the vault. I believe it was the holotape that directed me to Wayfarers, a store, down by the river, where there was 2 NPCs, 1 who was being held up by a third, but when I engaged the bandit in conversation and said I’d join him, a goul (one of the two NPCs) shot him. Then they had quests.

As a hardcore F4 player who has given myself benefits, there is definitely acclimation.

The most annoying thing so how fast my food and hydration go down.

I decided to subscribe, so I’ve got a portable “tent” with both a stash and a scrape box which is huge for collecting junk, as there is lots of junk around. And as a subscriber you can log into a private world or a friends private world, and there I ran to a guild friends camp who had lots of purified water, corn growing, a lake to gather water, a cooking station to boil the water, and then make corn soup. It was plentiful, but you have to make a lot of corn soup to get your food level up. My guess in real life you would have the runs eating that much. [image]

I stumbled across a farm with 3 feral gouls, except they were shooting guns at me! That’s new compared to F4. I barely escaped there . I‘ve not yet experience what the death penalty is, if there is one.

What else is new is degradation of weapons. Does armor degrade too? Anyway so far, so good.

My understanding is that if you kill a other player, you get a bounty on your head for other players to take advantage of. I still view Fallout as a solo experience, but it is handy to get help at times especially for some events, I could see a public server as a good choice.

Fallout76 Perk System
The Organization of it sucks. Instead of just picking what skills you want, you are offered random perk cards to choose from.

The SPECIAL perk system is odd and not intuitive to anyone who has played F4 because of how the interface is organized. Instead of (F4) having a bulletin board of perks that you apply points to specific skills as you gain levels and can see the big picture, in F76 it’s a two step process. I can almost guarantee you’ll miss assign some points. Just remember their are points assigned to SPECIAL categories, and then there are perk cards, that can be swapped out at any time to a particular category.

Due to the lack of the bulletin board perk display in F76, it is advised you research character builds and there are sights on line like: https://www.falloutbuilds.com/fo76/planner/ along with builds so you can formulate the end goal.

So when get advised you have leveled up, you select T for the perks interface. There you will scroll left or right in the SPECIAL Categories, to select a category and assign the point to it. In this case I’ll say you added your level up point to S (strength). Then you will see Strength cards you have accrued for that category, that you can select and activate.

It might appear and you might assume that assigning the card is tied to leveling up, in other words if you assigned a point to Strength, then you must assign a card to Strengh, which in essence you would do, but the reality is that cards can be reassigned at any time, but the limiting factor is how many points you have assigned to each SPECIAL category.

In the perk interface, when you are looking at cards, if you look at the bottom of the interface screen, there is a filter setting, and the current filter setting would be Strength, and you can toggle back and forth to select a different attribute SPECIAL category and see cards for the new category you select. Cards you have in your collection, can be swapped around at any time.

Of note, there are many more cards than SPECIAL points so the game forces you to have build sets. Right now, it’s a pain in the butt, but word is this winter Bethesda is going to incorporate an interface to make it easier to change out card sets.

Of note 2, after you have hit level 50 you stop getting new SPECIAL attribute points to assign, but instead you can shift the attribute points you have from one SPECIAL category to another, but just 1 point each time you level.

Regarding mods, I not 100% sure what the deal is. There are mods at Nexus for Fallout 76, but the Word is that technically mods are illegal and subject to getting you banned. There is one good mod that allows you to set up card sets to quickly change them out. There is a debate if this mod will get you banned. Then there us this discussion at Nexus Mods, mids will Eventually be allowed on “private servers”: https://forums.nexusmods.com/index.php?/topic/6725397-mods-will-be-allowed-on-fallout-76/.

What does that mean? No clue. Right now in game, I can select a private world and invite up to 7 guests, but I believe I am getting the private world by virtue of my subscription which also gives me 1600 atoms per month, that I‘m paying $12.99 per month for. Right now I’m mulling over buying a 1 year subscription for $99 or going without a subscription.

Regarding camps, camps are the only building allowed to you, but in any particular game world, you might not be able to keep a location. When I logged into a friends private world, there was a camp close by to my camp’s location and I was offered to move my camp to a new location for free. I assume in a online server, you’ll run into this frequently as many people want their camps by water so they can set up water purifiers as part of their camp.

Have I ever told you I am grind sensitive?

Right now I have two issues with the game, radiation mitigation, and adequate ammo. If I run out of Rad-Away (which can’t be made) and don’t have that Sun Kissed Perk, my impression is that I am hosed. I need to notice if death alters the amount of rad contamination. Maybe jumping off a cliff is the answer. [image] I probably have 9 Rad-Away on me at the moment, but I’m still worrying about running out. I don’t yet have the water purifier plans. 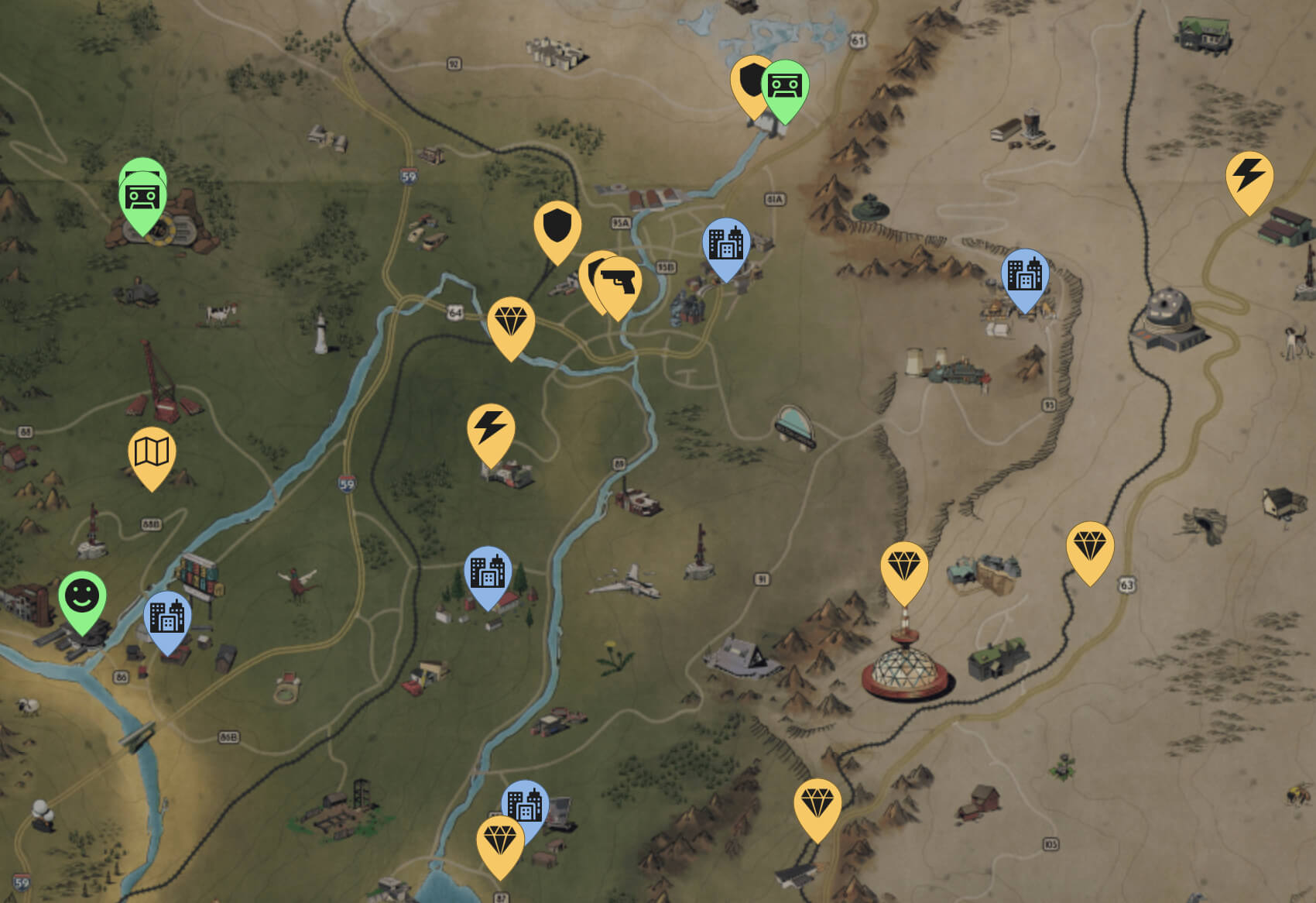 Interactive Map of Fallout 76 Locations and Spawns. Find weapons, resource nodes, power armor, holotapes and more! Use the progress tracker to find everything you need!

There is an interactive map which shows location of resource, but I really don’t like, have never liked having to spend dedicated time searching for resources because it is busy work, although I don’t mind collecting junk as I explore. I collect a lot of junk, yet I don’t have that much raw resources for making bullets.

The .308 bullet requires 12 steel, 8 lead, and 5 gunpowder for 20 bullets, that is ridiculous. Besides that most bullet cartridges are made of brass, is a unit of steel a thimbleful? If I am not mistaken, you can make substantial objects with 2 Steel. I view a unit of lead, steel or gunpowder should be venough to make at least a 100 bullets, if not more. Bullets, the projectile part are just not that big.

I find I spend quite a bit of time at the beginning of any play session sorting though Inventory, breaking down gear I don’t need that previously got shoved into the tent stash, collecting plants for soup and cooking food. It took me awhile to figure out that collecting plant matter and meat in advance without cooking it immediately is not worth it due to the high spoilage rate, so it is collect and cook. One reason why the cook station with the tent is valuable. My preferred plant soup right now is the glowing mushrooms (or whatever they are called) because they give food, water value and some resistance to rads.

There is a group in the guild on Discord who spend most of their time doing events and daily. Sometimes I participate and pick up a lot of xp, but that is not my usual play style, I want to explore but I don’t necessarily want an advance player holding my hand, rushing me though content, unless I need the help.

Due to food, drink, and ammo requirements, some of which can eventually be mitigated though perks, the game is more work than I prefer and at this point I’m good with a month to month subscription instead of springing for a year, which is a good deal if you think you’ll be playing that long.

I’m finally keying on gear with different stats vs static stats, I can look at a list of pump shotguns all with different damage, but you’d only know by looking at each one.