With Odyssey coming up this spring (hopefully), I wanted to remind folks that there is indeed an OTG Group still out there in the black.

I have seen Zeeks, Gadzuke and myself on… just not coherently grouping.

If Qyet is still around (Lord please make certain it’s so, after the last year), I believe he was the last one in possession of the keys to the OTG group.

I’m getting set to start playing Elite Dangerous as I find Star Citizen jus too buggy to play yet.

Been relearning the game, again.

Star Citizen is still a ways out.

I picked it up when it was free on Epic. I’ve been dabbling, but haven’t played open yet. Just space truckin’ missions really.

I love this game. I been off and on since release and really got back into it around Nov because of Odyssey. I’m mainly been doing combat, mining, and everything engineering makes me do. Engineering has forced me to do some activities I would have never tried, like mining. I’ve got most of the engi’s I need unlocked (few left) for my PVE combat Chieftain. Turned my clipper into a more everything ship

This weekend I bought a Diamondback Explore and jumped to a Guardian site and tonight I’ll do the Guardian puzzle and unlock blue prints for the Guardian Frame Shift boost. Scanned and explored along the way, found a really cool iced ringed planet. Then I’ll head back to the bubble for more NPC pirate combat. Once I’m done with engineering I’m thinking about getting into Power Play, Thargoid hunting, or the story arc / events that I keep seeing on reddit. The mysterious communication from this past week, etc.

Thargoids might be attacking a system, refugees need saving, and you may never know because there are billions of stars and unless you are out doing some heavy system scans looking for something unusual, or following the in game news, or just reading reddit, you’ll just miss it.

I’m exited about the new DLC. Looks great and after a few vids breaking down what has been shown I was back in.

I’m not a big fan of VR as the headset bugs me a bit, but I’ll use it at times and ED looks great in VR. I used it last night for my jump from the bubble to the Guardian ruins / site. 16 jumps in the Diamond Back with a Jump range of 54Ly. The cockpit of the Diamonback is great in Vr. A big glass bubble.

Oh, I was saved by the Fuel Rats a week ago. I was heading back from Dav’s Hope and I didn’t have my galaxy map filtered to only fuel scoop stars and got myself in trouble. I went cheap on life support, never winged before, friend request, never set a wing beacon. Had to be walked through how to do these items and was saved with under two minutes life support. It was one of the coolest social activities I’ve seen in an on-line game.

Finally picked up Elite Dangerous at the tail end of this year’s Steam sale.
(I spent about 100th as much as I’ve spent on Star Citizen and so far it’s 100X more entertaining.)

Already achieved Elite Explorer, made my first billion space bucks, partially worked through the Engineers, and am about to gear up to start working on the Guardian equipment. I can see what folks mean by ED is miles wide but an inch deep - but as long as I can find new and interesting ways to crash into things and ‘almost’ die horribly I’ll have entertainment value.

I fly by G13, mouse, and tablet. Come’on, when does Myth do anything normally?

The tablet interface controller is still a work in progress - but it’s sooooo much easier for panel navigation and not having to remember what less frequently used keys are where.
Using a free program called Macro Deck.

OK back to hauling tourists from Robigo to Sothis while listening to Expeditionary Force audiobooks. 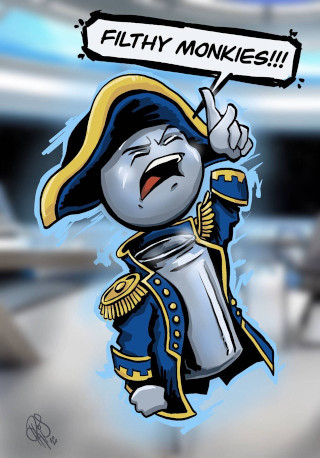 Myth is flying E:D.
I did not know this.
I have failed.

Right on, Commander!
Send a friend invite to Laust, please? (EDIT: … and Fireball Jones … and Valkyrie Starslayer…)
(oh yeah, get off my medium pad at Robigo Mines)

Whoa, I didn’t know you could fly by tablet. That looks interesting. I haven’t hit elite in anything yet and I’ve been off and on off and on since release. Credits are easier now so maybe the Cutter is in my future plans. Once I finish engineering my current ships and turn one into a Guardian Thargoid hunter I’ll look at possibly one of the big 3.

Couple things I want to do before Odyssey drops.

Zeeks is my ingame name.