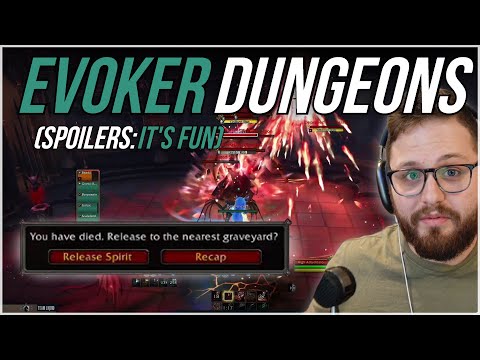 I tell you what, if you take a look at the group setup you will see 4 evokers and a DH tank. Insane!

Hey guys! We wanted to test out Evoker gameplay in dungeons, and in the Alpha, the best way to do that was mythic 0s! This class is insanely fun, has a ton of potential, and can troll the hell out of your group as well. Hope you enjoy!

I watched almost the entire video and these guys are testing the evoker class in dungeons. They got into M+0 but the keys that dropped for them were not viable when they tried to use them. But, watching/listening to their game play was so much fun.

If anyone is interested in how this class will play, I recommend you watch this and see for yourself. However, I think I heard Growl say something about the mid-distance healing might not be the best for healing if you need the healer at range. Anyway, take a look/listen and I comment below please.

P.S. The second dungeon they did Halls of Atonement and it was total chaos. I think they pulled the entire outside dungeon mobs. What a crazy bunch. But it was totally enjoyable to watch them playing this new evoker class. However, some of the skills I think just might get nerfed somewhat. And to watch one of them yank another player away from one mob or another, that might not be funny if done in jest, in the middle of a difficult pull.