What this Build is Not
This build is not a DPS rock star.

What this Build is
An Okay individual DPS output that elevates the DPS output of the group significantly making up for the difference when compared with a more traditional DPS build.

Explanation of how it Works
Because the VG abilities scale on focus and con - your healing including self healing is buffed from focus and your dps is as well. Your really aiming for that 200 int perk then you want focus to make the life staff useful and not just dead weight. But while your doing that with focus points your dps is still going up in a meaningful way and your self healing for VG goes up too. So you can survive longer in melee.

From a DPS perspective the void blade weapon does a lot of damage while its up for just spamming your light and heavy attacks. Because of this your not really benefiting swapping to a different DPS weapon when your specced into the blade. Your strikes stack a rend like effect in disentegrate on the mob and once you hit the mob and it has 3 stacks your also reducing your cooldowns. It’s not uncommon to see your voidblade and oblivion cooldowns come up again before they even expire. Where a healer with VG might keep it down 30% of the time at best on a run, this build can keep it down almost 100%. The disintegrate and Oblivion interact in a multiplicitative way and the group as a whole is doing alot more damage.

The healing tree you run isn’t meant to main heal but that’s okay. It gives up some staples that don’t make sense for a backup healer in leu of things that make sense for an occasional healing helper for when the shit hits the fan. This really shins in situations where the healer doesn’t run beacon. And your orb does stack since there’s no focus component. You can throw your orb out on the pull before the healer getting your fortification buff up early for the tank or melee. Then when the healer overwrites yours they refresh the hduration and overwrite the HOT on the group.

In emergency situtions you can be the group healer with this build. I’ve done it personally in instance Is now as high as M7 where the healer has died and I’ve had to keep the group up to finish the boss fight. Its not ideal, its stressful but it is amazing to have the ability to do that if needed. 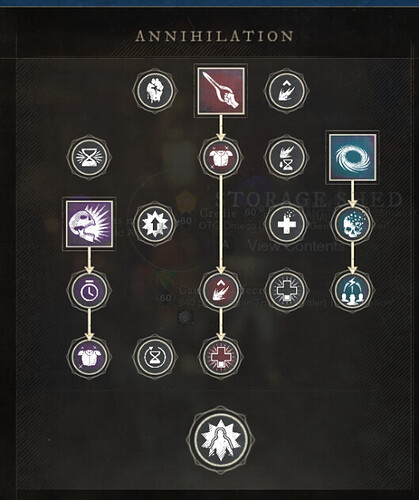 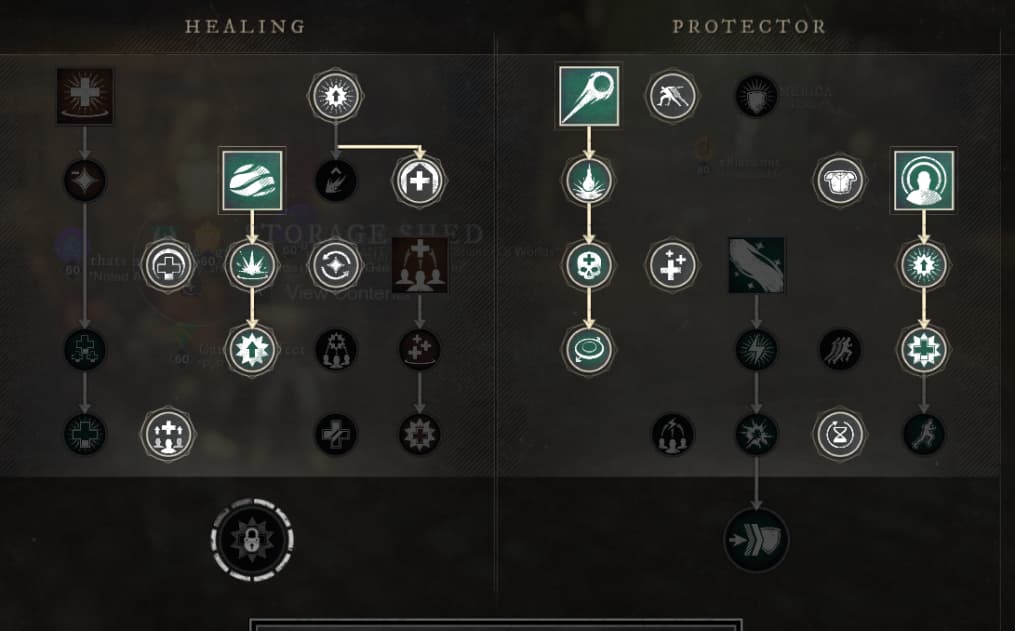 Your gong to be in melee most of the time. This build is incredibly hearty as long as you aren’t taking large direct damage chunks. For example isabella the final boss in tempest most Melee are affraid to stay in and fight her because of the tendrils she does and spin. This build can stand in that in corruption gear w/ gems and swing away and the self healing offesets the damage you take for the most part. You do have to pay attention but you don’t have to feel like a glass cannon.

As far as perks…
I highly recommend working on a ward set w/ perks. A good place to start is build a corruption ward set first, its the easiest to build by far and there are 3 dungeons that are corruption. Even in situations where the creature type is down to void, gemming to the correct secodnary magic type still makes this build viable for damage as long as you aren’t facing down to void and void mutation. In mid (m4+) to high mutations void mutation - the void resistance hinders this build.

You have to have voracious blade perk somewhere on your gear. This is how you stay alive.
In festering mutations you need to have putrifying scream perk to apply the healing debuff. Your scream is hands down th ebest anti healing debuff in the game in how its applied and easily maintained.

In an ideal gear set you have: 5 Wards, Putrifying Scream, Voracious Blade, Fortifing Sacred Ground, and the Orb of Protection perk. Beacon is a push if you can get it do so but dont worry about it.

I run void gauntlets that have the bane for the instance I am in and I prefer perks like enchants or refreshing move. Since you light attack a lot with your blade refreshing move can do a lot to improve uptime on oblivion and screams debuff. If I cant find a bane + RM then bane + enchanted or the perk that increases empower durations. The big important perk though is bane so you do mroe damage.

For jewelry Isabella’s Amulet is a good easy to get neck, Surgeon’s Ring is an easy to get and good ring, and the Reinforced Tempestuous Earrings you get from tempest from the quest chests are a good earring. The nice thing is you eventually get a FOC and INT version with the same perks which makes hitting the attribute markes easier when you start piecing armor sets together.

Credit for the concept and theory behind this build goes to Riboto a youtube streamer who does stuff on PTR. I originally found this and started fleshing it out after watching a M6 Gold 18m run from PTR where the video from Riboto ran this build. I have since actually spent time communicating with RIboto to find out more about the build as I became more interested in it myself. 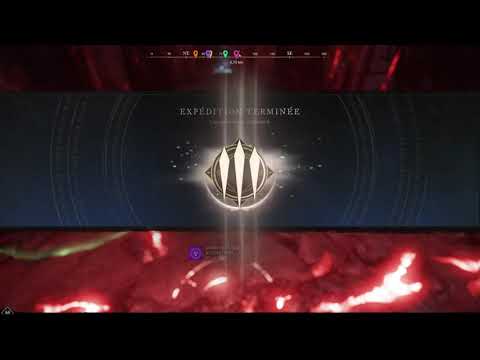