One of the things I like about Wargaming, and their World of Warships, is the frequent events they have, with the option to often complete them in the PvE modes as well as PvP modes.

For myself, I most enjoy the Scharnhorst and the De Grasse, while also slowly working up the German battleship line to unlock the Bismarck, in the PvE modes, so if possible those are the ships and the mode I prefer to try to complete events with.

This weekend is a “Day of the Russian Navy” event, with the third stage of the mission chain for the weekend able to be completed in “Battle type restrictions: Operations, Random, and Co-op Battles”, with Operations and Co-op being PvE modes.

Unfortunately, the third and final stage looked to be a challenge for me, with the requirement to “Survive and be among the Top 3 on your team in terms of XP earned in a victorious battle.” However, with the reward of a patch background, and especially the St. George Flag, I thought I’d try my best to finish the chain this weekend.

Surprisingly, to me, I had a great PvE Co-op match with my Tier VI De Grasse where I wasn’t high tier, one Tier VIII ship was the high tier on both sides, then four Tier VII, followed by three of us in Tier VI ships, yet I completed the third stage! 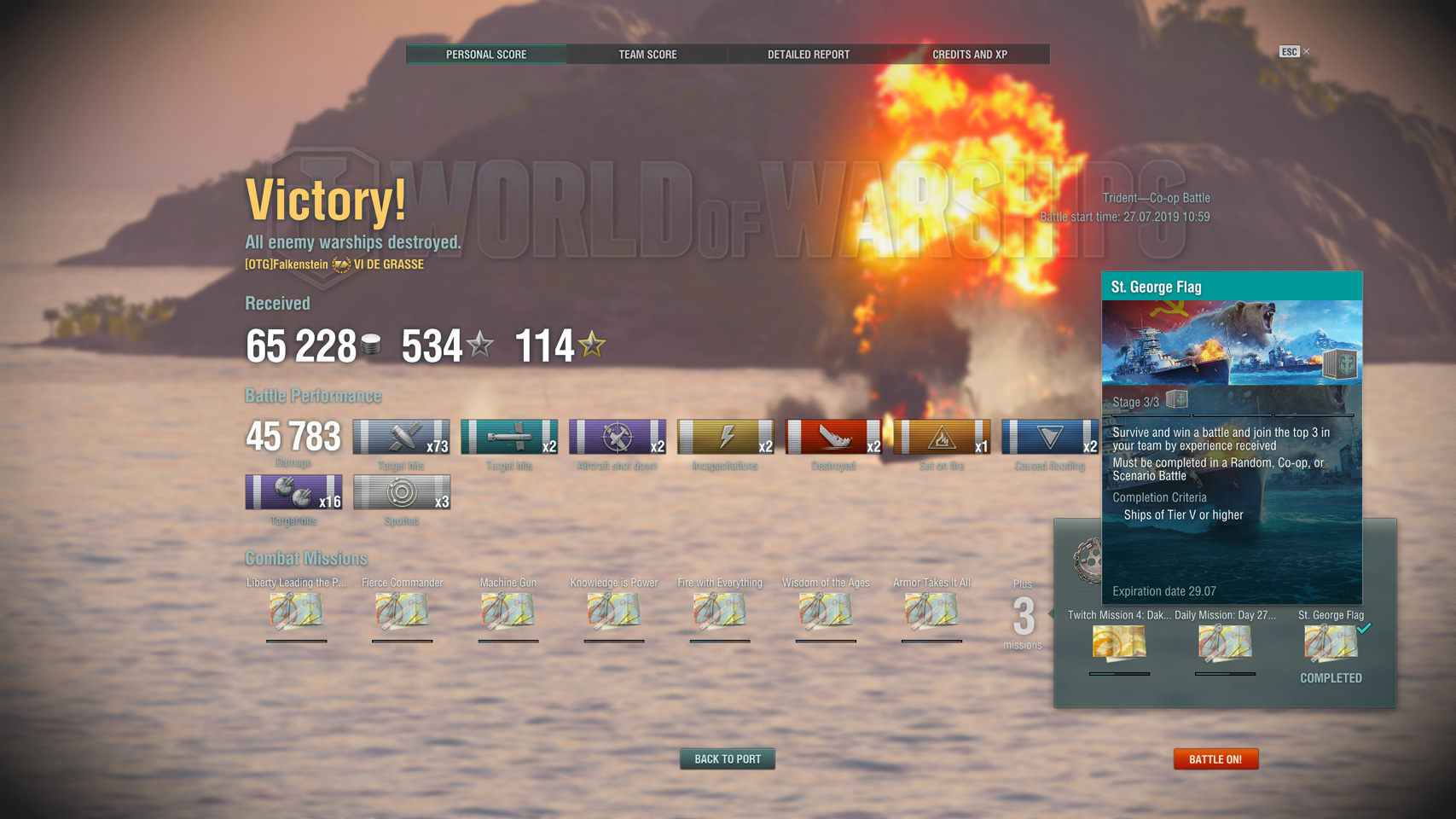 Congrats! The two ships you mentioned are two of my favorites! I think I like the Germans ships best, as a whole, but there are gems in just about every nation’s line. I’m not partial to the American cruisers because I’m a big believer in torpedoes and even though they have a lot of guns and fire fast at mid to upper levels, there are just a lot of times where having some torps can save the day…and BBs with torps are kind of an extra bonus

I still think the T3 Friant is OP!
Glad you’re having fun!

… I’m a big believer in torpedoes …

I agree that torpedoes are a big plus, for me, in boosting Scharnhorst and the De Grasse into my top two!

I’m working my way up to the Bismarck, but I’ve been considering getting the premium Tirpitz since I see it has torps and the Bismarck does not … but I’m just not sure how much I’d run Tirpitz instead of Scharnhorst?

Especially since Scharnhorst is Tier VII and Tirpitz is Tier VIII … one thing I’ve learned from World of Tanks is I prefer to ignore the Tier X game, that I enjoy the mid-tier games more. Tier VIII will get put into Tier X matches, while the highest Tier VII see are Tier IX matches.

Well, I’m the same way. I have a number of T10s and I hardly ever run them…although lately I’m really enjoying the Ibuki (a 9) and the Alsace is pretty awesome imho.
The Bismarck used to be more fun because it had the super secondary guns and decimated stuff up to 10km or so but if I remember right, they bumped up the same on the Tirpitz so it has torps and good seconds. I like it better than the Bismarck sadly. And if you look at that line you might see the Freddy at T9 isn’t all that special while the GK at 10 is kind of an average BB for the tier (although I’ve always liked it) and I hear it is getting a buff down the road.
There are a lot of ships to mess with and lines to go down. Play what looks fun to you and enjoy before they add subs and mess things up!