One of my favorite World of Warships streamers (likely my favorite despite his limited streaming hours), Statsbloke (https://www.twitch.tv/statsbloke), is streaming his clan’s battles in the current season, “Sea of Fortune”, of Clan Battles. When streaming Clan Battles, he does have a 5 minute delay to avoid stream sniping, so he is not as interactive with his chat as he usually is.

I enjoy the stream, and also enjoy seeing the compositions of the teams, so I grabbed a few screenshots, when I had a chance, of the summary screens. I don’t have any ships purchased with Steel, nor do I anticipate any in my future, but otherwise enjoy seeing what the “pros” prefer. In the later matches Venezia was getting some love, evidently especially due to her ability to punish DDs and cruisers that are not properly angled to her.

His clan is proficient, so I tried to make a special effort to grab compositions of those who beat them.

He is in the clan THROW, which competed in the last King of the Sea tournament, and made it to the Round of 16, eliminated by Odem Mortis just before the Quarterfinals. 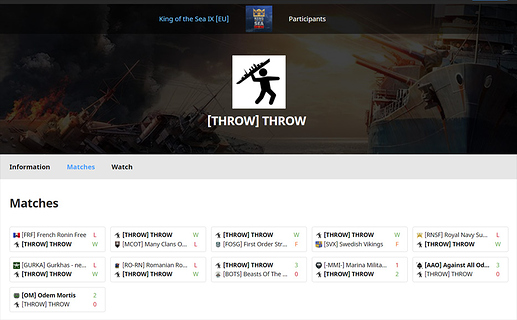 They have an impressive recruiting thread, no way I’ll ever have a “58% overall WR”, they are good!

I wonder if the only way to get a WR that high is to regularly group up in a division, where each player in the division has a ship that is capable of “carrying” their side, and join matches together as a division?

No, not really. Sure, ship choice helps and being in a division with active communication helps but there are plenty of people who are able to crank out numbers like that solo.

Just to show how easy it is to do I decided to set out to find one. I went to WoW Numbers, looked at my stats, picked my highest WR T8 ship with >20 battles, the Edinburgh, selected it, found the captains that do the best in it, picked one at random and it looked like smurf. OK, picked the 2nd player in the list, SkyshatterDeng. Just shy of 5k battles, WR of 62.4%, PR of 1931.

His most played tier, T10. So he’s not seal clubbing his way to those stats, either.

Interesting! I can see where in Tier 10 you are not low tier, so not as much completely at the mercy of your teammates.