I know this is very arbitrary… I haven’t played lately and currently have a T6 Fleet Carrier which I set up awhile ago as I wanted to try a carrier. Wondering what are some of the best ship options for assault currently. I also have an “assimilated assault cruiser” from the giveaway awhile back in my inventory but looks like that is for engineers.

The first question you need to ask is if you want absolute dps or sustainable dps. Absolute dps goes the way of cannons though debatable atm DHC is the best over HC with turrets in the back. Many ships can use cannons though some are restricted. Even though some big ships are to nasty to turn with certain traits can compensate. Point Blank Shot with Anchored you can basically be a stationary cannon. Sustainable can be achieved with beams. If you want front salvo load up on dual beam banks with omni beams in the back. Or normal beam array for port side maximum salvo.

As for ships 3 crucial pieces need to be looked at before selecting a ship.

Now if you want my opinion on the supreme ship that hands down blows even the scimitar out the water…it is the Tzenkethi Tzen-tar Dreadnought Carrier. The stats speak for itself. 5 tac consoles with a 5 and 2 weapon layout with 2 hanger bays for frigates. That’s not enough you have a 4 and 2 tac boff layout with another spot possible with 3 slots if you use the universal boff slot. FInally, on top of all this it even gives 1 universal console slot which means you can slot absolutely anything in it which means it is the only ship in STO with 12 console slots. The capability to use cannons as well as the armor and shield durability of a carrier ever since I saw this I have never seen a more broken OP ship since the scimitar.

It handles like a beast, I rarely die in advanced and confident to run with the ‘big boys’ in elite STFs.

That ship… is crazy. Going to go try and obtain one. Thanks!

@demiclise I guess my next question is where do you find the Tzenkethi Tzen-tar Dreadnought Carrier because I can’t seem to… is it cloaked?

Never mind, found it but DAMN… I do not have anywhere near that much money. Ouch!

Heavy Fleet escort Carrier a T5U ship. Its an escort with a hanger bay though in only has 10 consoles its built for dps with a 4,3 and 1 tac boff slot. Has defense to as it has 3 eng boff and 2 sci boff slot. 4 tac consoles with 3 eng and 2 sci. Can boost defense by slotting 2 defense resisting consoles with PTR and the rest dps based. Unless you get unlucky and get zerged or crit hit you should stand on your own even in advanced stfs. You can even add more survivability by adding a - threat console. 3 DHCs and a torp or pure cannon with 4 in front with 3 turrets in back. Slot point blank trait with anchored along with other traits to boost dps and you will rank 1-2 on dps board.
SLot either the elite tholian widow fighters from rep or elite peregrine fighters from fleet store to maximize the hanger slot dosent matter which one both are awesome in draining the health of mobs as atm pets dmg are not tied to tac consoles…yet or ever. The fleet module is easy to get in AH costing only 2-3 million. Or gimme your exact ship that you are using the T6 carrier and I can create a build for you.

This is what I have currently. Probably not built well. I have tons of stuff sitting in my inventory and bank I need to go through and figure out what is usable and what is junk. Just like in Champions and Neverwinter lol 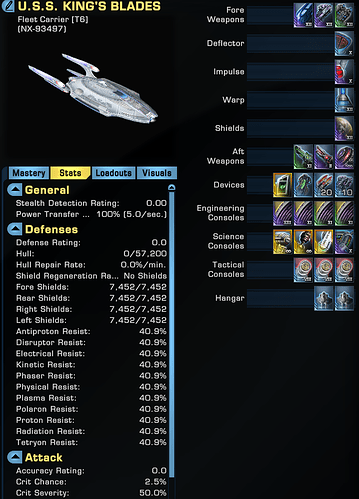 Forgot to ask what your profession? Tac/Eng/Sci? Also Alien or non alien? (Difference is extra trait slot on both ground and space). Preference in energy weapons? I see you rainbow with polaron, disruptor, antiproton and qauntum phase. Can do but IMO single type is best lemme know which you prefer.

Alien. Fed Borg or whatever they call it.

Whatever you think works best is what I will try to put together.

What class Tac/Eng/Sci? Depends on which traits I can slot for you.

Everything in this build except for ship traits can be attained by f2p players.

You would ned about:

The doff slots on both space and ground can do with green or blue variants the only difference is the frequency of the proc goes of more for purple than the other two. If you wish for me to explain cycling the skills during combat I can do so, lemme know.

This build maximizes your damage output while giving you enough survivability to last in advanced you will own in normal. It’s meant to leech shields and power settings so while you attack your also healing yourself. You’re gonna still need to heal if your zerged which will happen since you output generates alot of agro. Speaking of power levels which the build did not include set your weapon power to 100 first and the rest into auxiliary. You will rock 100 in all 4 mid battle with this skill set assuming you have everything listed.

Fantastic. Will work on it and let you know if I have questions… while grinding for credits for the Tzenkethi of course!

Really appreciate the help! I play sporadically, but always jump in when they have a new event like the Temporal or Discovery ones, but on my main I like to have a strong ship so I can do ship battles when I get the urge… fave part of the game and so different from other games.