The Atlas devs are gearing up for their major relaunch on October 8th (the promised “final early access wipe” will be Sept 28th to prep for the relaunch). In addition to new content and features Atlas is new to Xbox and it will support Crossplay so us PC folks will be playing with Xbox folks on the same server so it should be very lively.

Ahoy Pathfinders! This Captain’s Log will cover ... nevermind -- we’re too excited, theres much on the horizon to share, so point yer prows hither and let’s get to it. The much-awaited Xbox Launch is imminent. As in, really imminent. Here’s what you...

The new server names haven’t been published yet, but we will be on the only official North American PVE server.

On October 8th and beyond if you wish to have an invite to the Atlas OTG chapter please type your request in the OTG Discord #Atlas text channel or jump into the OTG Atlas voice channel and ask.

Don’t be shy! Come join us! You know you want to.

Interesting. I wanted to play before, but could’t get past the performance issues. I want to give it another go, so I’ll probably reinstall it and get ready for the update.

I’ll give it a try also

Yes it’s definitely worth trying if you like survival type games.

And GREAT NEWS! For last nights Atlas launch OTG managed to claim a large island in D-11 which will make life easier for all guildies to have a safe place to build your home and park your ship.

So for anyone just starting out, the easiest would be to start your character in the E-12 Freeport and either build a raft and sail over to the guild island or catch one of us online and ask to be guilded at the Freeport. We heavily use the OTG Atlas Discord text and/or voice channels, the forums not so much.

Are you guys still on the EU-pve server or did you move to the NA server at the restart? I’m on the NA-pve server .

Yes we definitely did NA-PVE (The Gorgon’s Gaze server) since it was thankfully up and running at game launch this time. Whew!

If you wish to be guilded OTG just type in the OTG Atlas Discord text channel, or if you don’t use Discord you can always sail from E-12 Freeport to the D-11 guild island and catch a guildie lurking there and start building your house and whatnot. The main guild base which is still being built is on the eastern side of the island, here’s a visual: 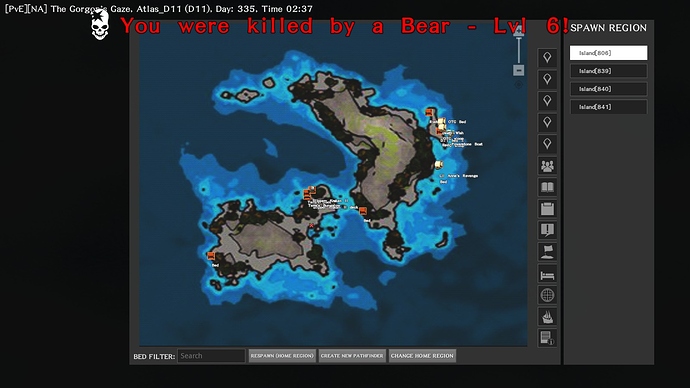 I’m way on the other side of the map… At least I found a nice spot.

Hello All,
I am starting a Pirate on this server. I am in E12 and will work my way to D11. I am on Discord, feel free to message me when you are on.