Anyone else continuing to have connection issues to Live or Classic?

I have been unable to connect all day and this evening at all. Naturally, I wonder if this is related to the DDoS attacks over the weekend. It does not seem from searches I did that this is continuing today but maybe it is? Is anybody else unable to connect?

At this point, I submitted a ticket just now just after midnight EST in the hopes they can resolve it. I provided all diagnostic info they requested, MSINFO & dxdiag reports along with 2 tracert reports to their Western and Central US servers which seem to complete with one timeout early on in both cases.

I notice it is taking a long time attempting to connect at the login screen and then the Unable to Connect error box pops up yet again.

I am wondering if the means to mitigate the DDoS attacks can ultimately wind up blocking legitimate account holder IPs somehow but that’s purely an uneducated guess. Anyway, I did ask them about that in case that is a potential issue.

My connection to the rest of the internet is just fine. It is only WoW in both forms that I cannot connect to at all today for all the times I have tried to. I feel sad… I need sympathies and loves from my guildies who I hope are having fun playing unlike poor me. Woe is me! Woe!!!

And no, I don’t want to go play outside. It’s dark out there. It’s just after midnight!

I was able to connect multiple times today and again this evening. Things have been laggy occasionally, but I haven’t had any problems connecting or staying connected.

Thanks. I think it is something here. I have been trying various things recommended on Blizzard support just for the sake of completeness but not expecting them to help. They didn’t.

Meanwhile, I notice I got an email about my ticket although the first one is probably just telling me they got it, etc. I get the impression that something on Blizzard’s end, not mine is actually causing this problem but we shall see.

Banished to the real world again!

Just an update in case anyone is still having issues connecting:

I got this response to my ticket today: 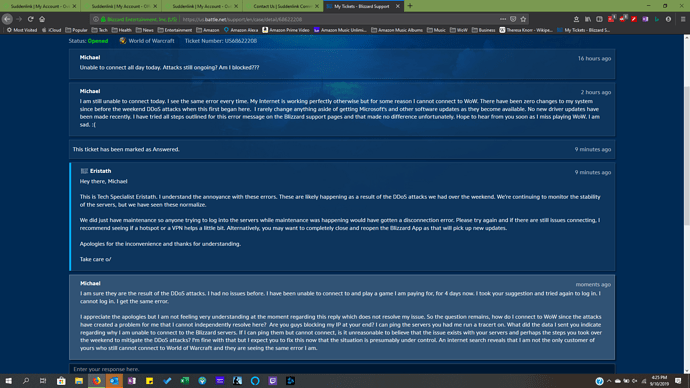 and below you will see my restrained response to this useless so-called answer. Tune in tomorrow maybe for further info if there is another more substantive from Blizzard.

This just in, well, a little while ago I read it:

Blue post in official forums thread about continued problems for many users unable to log in acknowledges there is a known issue resulting from the attacks that they are trying to figure out and fix. There is no ETA for a solution nor further communication on the subject.