Does OTG have any un/official voice coms as alternatives to discord?

I read that y’all used to use Mumble, and thats still a great option being’ self-hostable FOSS and whatnot. Aside from that however, I’ve got a couple suggestions ya might be interested in. Reason being, I’m not a fan of Discord… I’m not a fan of their TOS, Privacy policy, or track record for general security and other predatory actions towards minors.

First being something called “Revolt.chat”, it’s a “1 to 1” FOSS replacement for Discord having many of the same features and functions. Its also self-hostable, so you dont have to rely on someone elses hardware if you don’t want. It’s still on beta tho, but coming along very well. I think the devs are working on bot support now, and I’ve heard it can bridge to Discord.

“Fosscord” is another open source discord bridge I’ve heard rumblings over but havent really looked into yet… Could be a gem?

I’d even recommended a Matrix client like Element.io over Discord honestly. Matrix is a decentralized chat protocol, not unlike IRC. Their are many clients that can be used to access it but the most feature rich I’ve used is Element.io. Still supports the same functions as Discord, and VOIP. but the UI takes some getting used to. 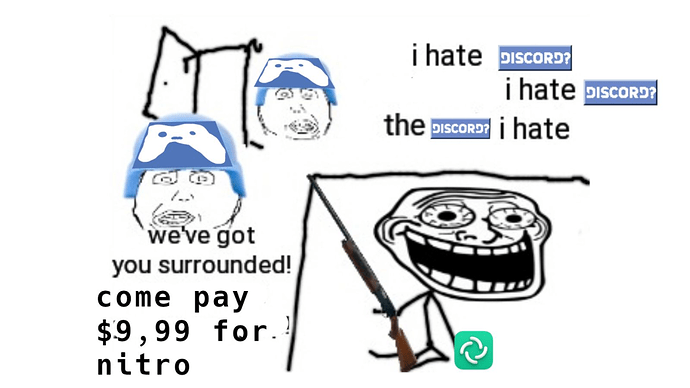 That’s about it, either way its cool. Just thought I’d throw those out there.

This is my first time reading that the developers of Discord take predatory actions towards minors.

Moderators, which the devs may very well be themselves… who knows? But yes, discord is steeped in “bad stuff”. If you’re not already aware of the scope of that “bad stuff” and want to search for it yourself, well, good luck with therapy. Still, that’s more than enough to repulse me away from the whole damn platform, aside from my other gripes.

But of coarse! don’t take my word for it… https://alternativeto.net/software/discord-app/about/#post-105168
“Alternativeto is a crowd sourced software list for apps and software that share similar properties and functionality, is a good resource”

Thanks, we appreciate your feedback!

The decision to move to Discord was a slow, carefully considered one. Opinions vary, but for the most part we have been satisfied with our implementation of Discord. Our Admins will see this, though, and will consider what’s been said.