Agent Smith is no more

Well it is official. The Calling All Devs this week confirmed that “Agent Smithing” into an NPC to play with a friend has been removed from the backlog and is no longer being considered for Star Citizen.

Are you sad to see it go or was it more feature bloat?

Understandable, but too bad.

I’m going to assume at some point Turbulent will be able to put in a calendar into our Org page. If there’s a Org date than we’d all be able to see it and make the needed accommodations to be there.

I’m also going to hope that there will be some sort of calculation system we can use to determine something like this:

I am in the Goss system on Sat. and I need to be in Croshaw on Wed. I can use said calculator to determine that I need to be in the game for X amount of flight time between the 11 jumps to travel amid those two systems and arrive without inconveniencing the other members for more than a few minutes.

I liked the idea of being able to slide into an NPC. Particularly after playing EVE for a while and having a friend not be able to play with/support me because it would take to long to get there; you’ve only got about 30 minutes that you’re both on at the same time and it takes 20 minutes or longer to fly there.

So, I guess not a possibility a year or two after launch even? I think it is a shame because as the others pointed out it would have allowed grouping very quickly. Or even people coming to your aid to turn the balance of a battle. (i.e. have crappy AI crew, some friends who are good ghost in to assist on shields and weapons as you fly, etc., etc.)

Anyway, would have been useful. Not going to break down in tears though.

There is hope for NPC controlling. I hope it stays in.
https://robertsspaceindustries.com/spectrum/community/SC/forum/3/thread/and-agent-smithing-is-dead 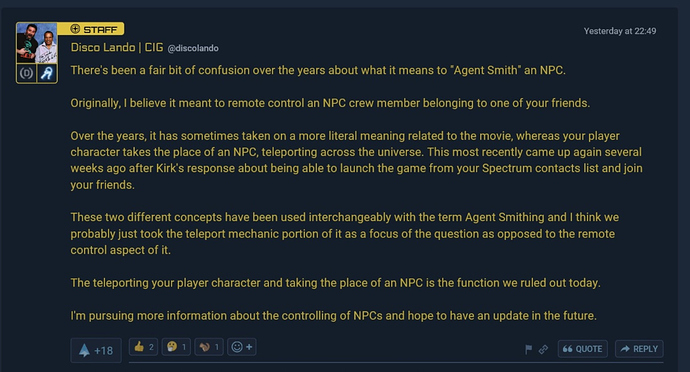 MEh.
Not the same.

And I seriously doubt that is going to make it in game either. They are throwing a bone there.

Personally, I am glad it is going. For me it was an immersion breaking feature in a world deep in immersion.

We have used raid calendars successfully for years. We can do so with this game as well. Our org is likely to be centralized around a specific region of space anyway, so getting together for a raid/event will not be that hard. It will mostly effect the players who like to be explorers. But having a spare alt that lives at the org base and runs events is still an option.

I am glad the mechanic was removed. And I like Todd Pappy’s response. If you want to play with your friends, then fly to meet them. There is no magic teleporter in SC.

I am ok with that.

Well there is immersion and then there is fun game play, and they aren’t always the same thing. I personally was looking forward to that. I hate waiting 30 minutes for everyone to get their shit together to start something and then invariably someone or two or more have to leave for whatever halfway through the event. It is inconsiderate at the least, but then I am x-military and I have a pretty low tolerance for shenanigans. Which is why I usually just solo. Which is also why I would have really enjoyed the NPC replacement. Once the crew gets going, I could just slip in. Oh well.

I hear ya. That is one reason I started hanging out with the Legacy guys. They fly combat style and have strict start times, expect you to show up or miss out.
OTG just isnt going to ever be that type of org. Too laid back for that. Which is not a bad thing, just a thing.

If you ever want to fly with the Legacy group just let me know. My whole reason for interfacing with them was to create a relationship with an org that is primarily focused on merc work. They plan to hire out as escorts and we plan to be a mostly mining and salvage and exploration org. It is a match made in the heavens.

But, for the few of us in the org who want to fly a more structured way, we have been given an open invitation to learn their procedures and join them in their ops. Basically you take a short flight test making sure you know how to call out properly things like when you are engaging an enemy, when you are on the field, when you are out of fuel, and to take commands properly like setting your wingman, what target you should be engaging, what jump out point you should have pre-locked in the map. Stuff like that.

They are laid back, but serious about their flight time, and lots of fun. I can see a great synergy between the two orgs when there is enough game to support it. Which like I said, is one of the reasons I keep a good relationship with them.

The problem with getting rid of it is world size. If it takes 40 min to cross a system (not counting the 8 times you’re interrupted), then you will not see or play with anyone in your group unless you’re around them all of the time. Everything requires coordination. It’s not like pretty much every other MMO where you can “drop everything” to go help a friend then zip back and finish what you were working on. If you are 3 systems away, then you are 3 or more hours away and screwed if you need help, which means that the only way to play together is rigidly aligned schedules, which is pretty much the exact opposite of me.

I hope Jared find something and says that it’s still in the game because that changes how groups work together without it. If we can’t quickly help each other, everyone is reliant upon strangers, which is basically giving your ship to pirates and griefers. I get that they want service beacons to be a thing, but not everyone likes playing with strangers.

Yeah that is the general concern from many people after the announcement.

So assuming that they do not change their minds and they stick to this direction, which is likely, how would this look for OTG?

First off, selecting a base of operations would become much more important.
We would want to make sure it is well within UEE space since the ‘edge’ systems are going to be the most commonly hit by pirates.

As a guild we may need to have more of a global representation. Meaning players from around the world on at all times of the day and night. (We are North American based now and well over 90% of members reside within 4 time zones)

We would need to plan much more than in other games. Every resource gathering, every salvage excursion would need to be put on the calendar so that others could join in.

We would need to be more social within the guild. Typically our members log in and play games solo or with a small group of friends and communicate with the rest of the guild in chat but not actually game with them.

It would mean a different dynamic for us as an Org and as individuals.

It is a big decision and a significant marker for how the game will be played.

Personally, I like it. I like the idea that we need to travel to other locations not just appear in other locations. I like that space is big, and decisions about where to locate your base of operations matter. But, it also means there are consequences too.
Help will be harder to find within the guild, at least until we make the shift to this playstyle.
Access to guild resources will have to be tightly monitored and restricted.
Membership to the org will require some time to prove you want to actually be a member not just use the org for what it has to offer.

Overall I like it, but it is not a small thing.

We just need to be an alt guild. I can’t be locked into a small area, I’m an explorer, so I’ll be 10 systems away from everyone, all of the time. But I’ll have an alt parked with ships near wherever OTG ops are happening so I can jump in if needed. That, or I’ll just make sure all OTG Ops are using my ships, I’ll log my alt off on the ship and go do my thing, so I can log in whenever needed and I’m there

That seems like the most plausible solution, so instead of Agent Smithing, we have Multiplicity. I think that makes the most sense. One character will be a solo mostly and then the other will be an org groupie. I will probably transfer some ships around between my accounts to accommodate that once everything is set in stone. I pretty much have all my big ships on my one account already, and my more solo friendly ships on the other with a little of overlap.

Jared clarified that they’re not ruling out controlling an NPC on RtV but it’ll be “in the future” 12+ months out.

Meat’s back on the menu boys!