Most OP Class ever

After watching this video, I am really hoping Bliz fixes all other classes and at least balance them against Evokers. Or folks will be really unhappy if they do not want to play an Evoker.

Some of the talents in this tree really can be made into masteries which all other classes could have access to. However, it would only work if Bliz would only follow through with true redesigning of the talent trees for all classes.

Some of what the Evoker tree offers are similar to some of GW2 Masteries which are available to all classes in GW2. So if Bliz offers some of these as “masteries” so everyone can obtain them, I think that would help a lot. 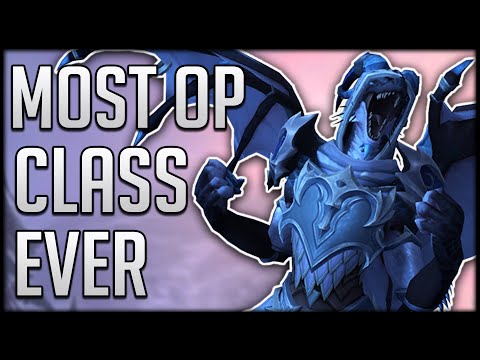 Hero Classes will be better at launch for two reasons…

For example…Demon Hunters were the bomb…who didn’t want a class that could glide from any high point?
As Horde in BFA, their main city of Dazaralor was tiered with several city levels staggered down the cliffside. DH was just cool to launch from the King’s Chamber and glide to the docks. Revendreth was another good example of a zone built around tiered levels, that before flying required you to find an elevator down.

Now you don’t just get to glide…you got the new racial ability of Soar…you get to mini-fly your Dracthyr anywhere in Azeroth. I portal back to SW to go to the AH (yes, there is an AH in the new major city), I don’t run out of the Portal Tower & mount up, i run out and just freakin launch into flight (yea, druid has instant flight form but this is just so much cooler & faster)

What motivation would be to come back and play yet another healer class that was just as good as your Holy Priest? (and the new Holy Priest talents look AMAZING) Leap of Faith was always good to pull the player out of fire if they were not paying attention (Thanks Jen), but now…you got a slow class that can’t run out of the raid wide poo mechanic (Warlocks are soooo slow without Soulshape (i am not giving up Dark Pact) and we haven’t seen anything letting us know we get to keep that ability yet)? Don’t worry, your Dracthyr buddy will grab you and fly both of you to high ground using their abilities.

Its early and all classes will continue to be balanced over time as they get tested and played in Beta, but i expect Dracthry to still launch a little OP for that Expansion Launch wow factor.

This discussion is interesting for me. I’ve been out of WoW for a couple of years and I’m excited to see the Dracthyr…maybe because they do offer the soaring ability and the flexibility to do high end healing as well as dps. I understand the concerns about being overpowered…those concerns are real and reasonable I suspect. But the new abilities are really attractive from my viewpoint. Thanks to both Lyn and Trevain for the post.

I am also posting a playthrough video which shows the Dracthyr starting out. You can see it here.