Been busting my ass last several months, finely got some debts paid off! SOOOOOOOOO… told wife I’d like a new comp for my Bday ( got this one when I joined OTG back when AOC came out) she said I could spend up to BUT NOT OVER, $1500. Now problem is I don’t know a motherboard from a fatherboard. I’m looking for a premade don’t need the latest and greatest cuz I know when the new stuff comes out the bottom usually drops on the stuff it replaced. I’m looking for something to last almost as long VR Ready and game play the newest games on high settings. ( plus bought into Star citizen but haven’t been able to play on this comp for awhile now). Any suggestions would be great!

Hardware Revolution is geared more for the DIY crowd, but they list parts that you might want to consider if you’re going to use a PC assembly site like CyberPower.

I used to build my own but I have gotten lazy in recent years. I buy from Digital Storm and I have always had good luck with the quality of their builds and their price point.

Guys on the facebook group seem to love their Origin PCs. I personally think they are overpriced but you do get a lot of perks (discount upgrades, a cool-ass wooden crate for shipping, etc) from what they say.

I used to build PCs from scratch, but for the price point, it is actually cheaper to just buy something with high reliability, good warranty, and then just add on or replace a few key parts.

My last PC I purchased a decent HP unit for around $800 refurbished, it still came with warranty. I then purchased a 1TB SSD hard drive to speed it all up, a better power supply, and a midgrade video card, came in around 1300 total.

I also was a computer DIY type but had my last system build by a computer store here in Tucson.

This is a great place to start:
https://www.letsbld.com/BLD#

They don’t over price, most components are sold at MSRP. And the quality is pretty good as well.

Most of the “cool” boutiques are way overpriced, Origin included.

Jayz2cents did a review on one and found it to be pretty good.

Buy this and you can even do 5 monthly payments with no interest.

But this to make your wife happy.

@Splatt
very good desktop that will meet your needs for years and pay 1/2 of what wifey allotted. Even in laptop variety. The laptop I am writing to this on is nearly 2 years old now, and I play LOTRO on it - just not at highest settings. I only paid $439 for it.

My gaming machine is > 2 years old, cost me < $700 (built myself) and it easily plays LOTRO with everything on high.

Now the problem is that RAM and vid cards are more expensive now than when I built my game machine. So you will have to be careful there. I usually say the more ram the better but I am not so sure that you can’t get by with 8gig.

I agree with “www.newegg.com”. Been a long time user. I also watch “www.tigerdirect.com” but in recent years they have become more expensive.

Anyway, in the “pre-builts.” Don’t let them sell you stuff that you probably really don’t need. For instance a 1200 watt power supply. (If your like me, you still have to be able to pay your electric bill!)

I currently have an MSI lappy that was modified by XOTIC to add copper pipes, thermal compound and an SSD. No way was I gonna build a lappy. I am more than happy with it and would recommend XOTIC highly.

My previous lappy was a Cyberpower and while it got a bit warm with the graphics under load, it is still running fine.

I still build my systems myself and have been looking at upgrading also due to Star Citizen not running well on my current PC (its an I5-2700k with 32 gig ram and a 4 gig NVidia card).

Buy this and you can even do 5 monthly payments with no interest.

I’ve never purchased a CyberPower system, so I’m not comfortable recommending the brand, but I would say this system has the features you want for playing SC. You’ll want SC installed on the SSD Personally I’d install the rest on the HDD, but I had an SSD die on me after just a couple months (sadly I didn’t get around to installing it for a few months so by the time it died it was out of warranty). If windows 10 is installed on the SSD one of the first things I’d do is create an image of the drive with software like Macrium Reflect so if you do have problems with your SSD, you’ve got a backup of your OS. Even if it doesn’t die its still a good idea in case you ever decide to upgrade.

Looking at refurbished on NewEgg and TigerDirect is a good idea, I’ve had good luck with refurbished items from both places. You might find a system like the CyberPower one above cheaper.

Runs great for what we like to do. We added the Samsung 870 M.2 NVME drive to give it that added pep

Does not allow for tweaking the memory or cpu much but it’s perfect for Archeage. With maxed out settings we average around 100FPS so not to bad for a pre set PC.

Like i said i wouldn’t know which type of GPU to get or CPU i don’t know what the diff is. like ram so many different types i would like 16gb but what type. i just really cant wrap my head around this stuff. OK looking at this… 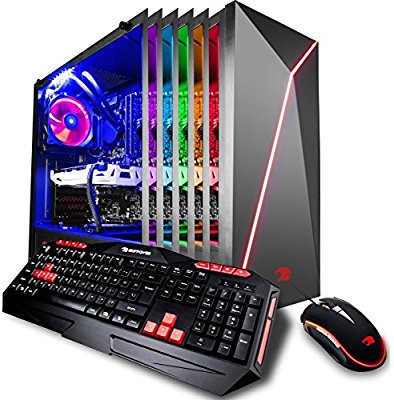 Purely based on parts, it’s not a bad rig nor a terrible price (quick guess is $1100-1300 retail parts, but I didn’t actually price it out so may be high). No monitor! It will run most anything you’re likely to throw at it for the next 3-4 years, maybe longer. Not bad at all.

BUT… you knew that was coming, right?.. You realize you are getting some gee-whiz-bang flashy junk along with pretty solid components, right? If you want tricked-out LED’s, hey, go for it. You could do better for less money just by avoiding the kiddy magnets.

CPU: “i7” is good for professional photo/video apps, CAD modelling and similar heavy-duty content creation, overkill for games (other than flight sims). “i5” is great for gaming and will save you $100-150.

GPU: 1070 is good, but kind of falls in the “premium price for last year’s model” category. 1060 w/ 6GB mem is a lot cheaper and more than enough for most current games. 1080 [ti] is a better choice if you really want high-end graphics or VR or “future proofing”.

And don’t give up on that WiFi too quick; it makes the whole machine much more versatile, only adds about $40, and it’s standard on that range of motherboard.

Add spending $120-150 on a good monitor, $50-70 on a good gaming mouse/stick appropriate for what you play; decent headphones or speakers.

@Kniq I agree with much that you say here, but from his OP…

( plus bought into Star citizen but haven’t been able to play on this comp for awhile now). Any suggestions would be great!

So as someone who has tried playing Star Citizen on an I5 (and this is just an alpha version that we only have access to a small fraction of what the game will actually be) I believe @Splatt will not be happy with an I5 system and should really be looking at an I7 system.

I haven’t played Star Citizen, so I’d defer to your experience. I know there are other games that are CPU intensive. I keep using i7’s myself, but I always over-engineer stuff.

Anyway, yes, Splatt, you probably do want an i7 after all.

I can only add that iBUYPOWER is my current rig.
About 3 years old.
The GPU only lasted 2.5 years (AMD 7850).
Otherwise, I have no complaints.