Computer Issues and a new build

So my trusty MSI gaming laptop of 6 years, that I honestly never had a single issue with…well…the GTX video card passed away recently…

And I was stuck with some non gaming intergraded graphics crap for a while.

Sad news, the laptop is to old to fix this thing and MSI doesn’t make parts for it anymore. So I have been backing everything up and prepping my baby for the “closet of computer deaths” in my office. But there is good news under this pile of tears…

The wife OK’d me to build a new computer and all the parts are ordered and should arrive tomorrow. Hopefully I can put it all together this weekend and enjoy some new gaming bliss. The nerd in me is jumping up and down, never thought the wife would be good with me spending what to her would be, “to much money for a computer”. So I am gonna have to make sure the Honey Do list is taken care of for a while. Plus I just had to share my excitement with someone

I cant wait to see all my favorite games in high resolution and lots of the features maxed out. Its been years of toned down graphics in my games, so it’s gonna be a big boost in visuals.

I went with the following parts so I can eventually upgrade the CPU to more cores for my graphic work, add SLI and everything I ever wanted down the road as prices drop. I am hoping I can get a good 6+ years out of this system. The computer needs to serve 2 purposes…my gaming nerd side and graphics work (Graphics/Video Editing etc), so as ya can see I have a bunch of ram.

For all you computer nerds…here is what I ordered:

I cant wait…And I’ll take a few pictures of it once its all built.

That looks like a beast of a computer! Hope all the parts work for you.

What are your thoughts on the Intel X series i7-7800X? I ended up going with an 8700K since it seemed to out perform the 7800K and I just didn’t see myself needing those extra PCI-e lanes. Have you put any thought into delidding your CPU?

Thanks Vanster…I am hoping I have zero issues with the parts this weekend.

Thisnthat,
My real thought with going with the 7800K was my overall price point of what I picked out across the board for parts and I knew I wanted to get into the X series processors on the 2066 chip sets. I would have loved to step up to a faster processor and add some cores, but the prices really started to jump in the X series and it would have meant choosing some lesser parts else where.

My end goal is to get at least a 12 core processor in about a year when prices start dropping . I’d love the 18 core extreme….but 2k is a lot of $$ for a chip.

Wont be doing any delidding….this will be my first venture into water-cooling and trying out some overclocking. So starting semi simple and adding things down the road to it once I get comfortable with what the system can do.

Thinking your Honey Do list be longer then ‘for awhile’

So I got everything, put it all together. Got my loop built and tested. Was all excited to be back to gaming and such and what goes wrong…I find out I have one single bent pin on the motherboard and my CPU wont recognize.

Pretty nice looking build and sweet on the closed loop water cooling. I run a water cooled CPU and EVGA hybrid 1080 that has a water cooler on the GPU plus a fan and radiator setup. I’m gonna make the move to a closed water cooled loop setup in a year or two, but first I want to save up some money and just put together a ludicrous top of the line build.

Thanks, Ryu. Make sure ya save some coin for the water system…When I put everything together that was on my dream list it was way to much $$$$. So I ended up getting a Extreme 240 Cooling kit from EK. When I spoke with them, they said I can cool the 1080 too and just add water block to this loop. So hope to do that in a few months. I just need to wait until 13/14th for my replacement board to be here now. MSI is doing a motherboard swap and giving me a new one…so at least I know I will be good to go soon.

Well, I finally got my new motherboard back from MSI and just finished installing all my games/apps last night. Did a little gaming into the AM…Loving the performance gains from the upgrade…Stuff sure looks fantastic in 4k ultra

I also started building myself a “ultimate computer desk” while I was waiting on the MB to arrive. You can see the top of it in the pics, going for rustic farmhouse style. I have the top of the desk resting on 2 small file cabinets for right now. But making it a standing type desk with extra long pull out drawer for Keyboard/Mouse. Then add a area to hide all the cables/router. Think I’ll also end up mounting the large monitor to the wall next with some RGB lights behind it 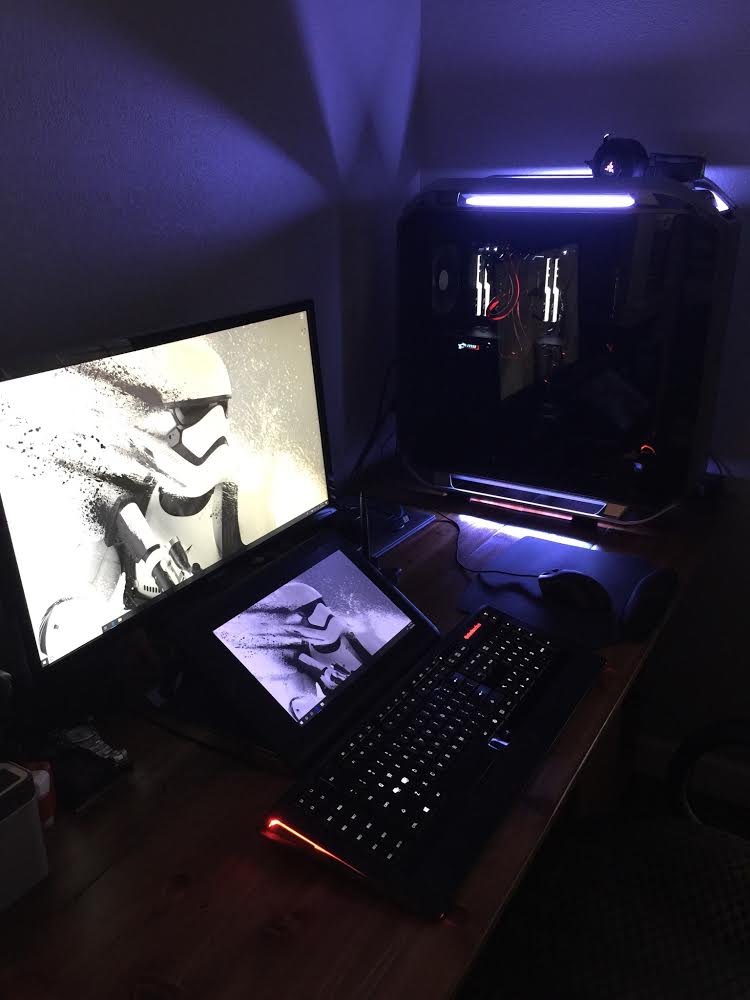 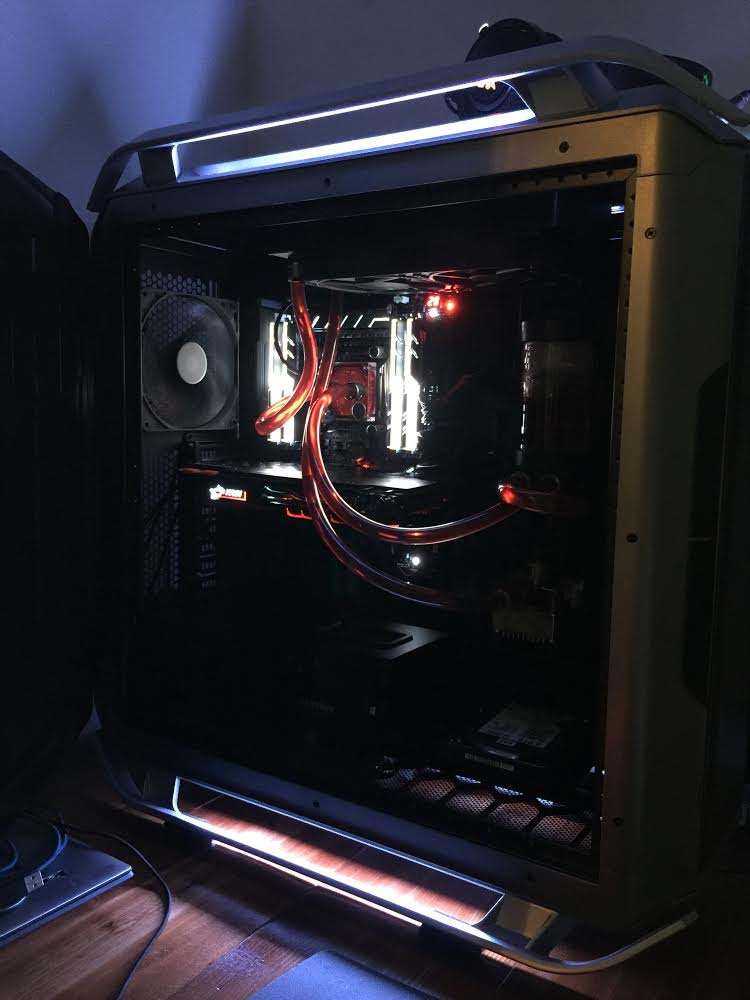 I’ve been wanting to upgrade for a while as my current rig is pushing 7 years old, aside from a NVidia GTX 970 that I got 3 years ago I think. The I7 X series is also what I was looking to upgrade to, that I9 is just too much right now. I’ve seen some reviews that the all the the Intel X series run hot, but those reviews don’t say if they are using air cooling or liquid cooling. So would love to hear how your system is working out for you.

I have been doing some video editing and gaming over the past few days. Most of the time it sits between 27-30 Celsius, under stress I have only seen it get up as high as 39. I can probably cool it more if I turn up the pump speed. Right now I am just letting the MB automatically pick the speed based on load.

So the liquid cooling is keeping that well below the 100°C max. Thanks for letting me know.

are these cooling systems quiet?

The loudest part is the fans depending on the speed they are at. You can barely hear the pump running. And every once and a while I may hear some water splashes in the res. But everything is very minimal.

BTW, the kit I got for the water cooling is the “EKWB Extreme 240 Starter Liquid Cooling Kit”. https://www.ekwb.com/shop/ek-kit-x240

It comes with everything ya need to water cool your CPU. I spent a lot of time on the phone with the tech guys at FrozenPC and they told me you can also hook a VGA block to it, ya just have to buy the block for your card and add it to the loop after the CPU. Then if you want to do SLI down the road and want to cool all 3 parts, you just have to get a bigger radiator (360 size).

Overall I am extremely happy with the water kit and totally recommend it to anyone getting started in water cooling.

sigh So I finally got the parts to put together a I7 X series and I can’t get the thing to fit in the case.

The MSI X299M-A board has the 8 pin power connector up top near the keyboard port which puts the power plug in the way of the cooling radiator (an ek-kit-s240). I’ve tried the case for my current system, thinking that would be no problem as there is a larger gap between the motherboard and the top of the case, but sadly the cooling vent is centered so the radiator with the fans won’t clear the motherboard, which actually makes it worse than the new case.
Looking like I’m going to have to make some new holes in one of the cases.

I will say that I had to do some creative thinking with installing the radiator to fit over the mother board myself. I eventually found the area for it to fit just right. Same issue with how the fans hang off of it and the room next to the MB…it can give you a extremely close fit. Defiantly wont be able to upgrade to a 360 sized rad in the future in that same position. Way tighter fit than I would have thought.

After flattening rivets and drilling new holes, I could get things to fit, but the radiator was still touching the CPU power wires. So I bought a different case. From the pictures it looked like plenty of room in front for the radiator and fans, but creativity and modifications were still needed. The fans on the front of the case are held to a bracket and if I attacked the radiator to the back of the bracket with the fans behind that, the bottom fan would be against the drive bay. so instead I found I could run the long screws that came with the kit through the fan into the bracket (which is threaded so I wasn’t sure it would work) then into the radiator.

The pump also took a bit of modifying as the drive bay takes half of one the fan vents on the bottom of the case. So I drilled some holes in the top of the drive bay and had to use a punch to ‘counter sink’ the screw heads as the hard drive won’t fit in the bay with the screws poking down, but at last: 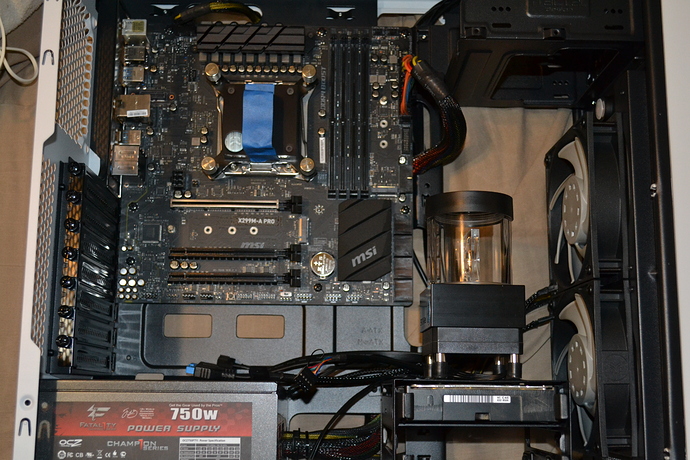