Dates/Time: Sundays at 8 PM EDT through 11 PM EDT, and see below

This will be a running of the Fly Free or Die adventure path by Paizo for their Starfinder role playing game. It’s a 6-volume Starfinder AP that runs from level 1 through level 13. 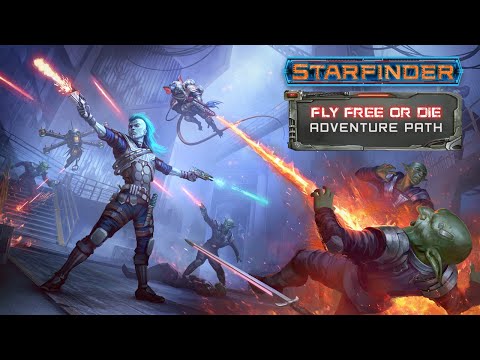 In this thrilling kick-off to the new Fly Free or Die Starfinder Adventure Path, a crew of scoundrels, rogues, and misfits finds it hard to survive in a galaxy where everyone has a price. Targeted by a crime boss and his army of enforcers, preyed upon by faceless mega-corporations, and hounded by rivals, the crew of the Free Trader Oliphaunt line up the big score that will at last make them rich beyond their wildest dreams. But when their many enemies join forces and the crew loses it all, they find out there’s two things in the galaxy that can’t be bought: freedom… and revenge.

It’s just another day punching the clock when the player characters, a blue-collar transport crew, are blamed for a bad cargo and stiffed of their bonuses. They take a dangerous job smuggling weapons to a world conquered by militant hobgoblins, but one fiasco later, they’re in debt to a crime boss and about to be fired. Their only chance is to steal the Oliphaunt , an experimental cargo hauler with a magical secret, and then survive long enough to collect the payoff!

Gameplay information and/or rules from all the above sources is available for free here.
Character creation within Fantasy Grounds for the Starfinder ruleset is kinda wonky. Be prepared.

Session 1 - AP/adventure start will be on Jun 27th.

We’re no Heroes is the title of the first adventure. It means what it says. If there ever was a campaign for neutral non-heroic types, this would it. That being said, the captains of the inspirational material (Malcolm Reynolds of Firefly/Serenity, and James Holden of the Expanse) are good guys even though they pretend not to be. But the rest of their crew… ~wiggles hand back and forth~

We can make almost anything work, but this is not the adventure for bad-ass warriors, nobles, heroic save the world types. This is a campaign for and about working class people trying to just earn a paycheck in hostile galaxy that’s just trying to keep them down.

Have two potential character ideas, so will see what others come up with…

Finally, a game when I don’t have another game or static group. I have all the Starfinder stuff but have not had the chance to play it and I’m interested.

You know I’d like to get in on this if I could.

And like I posted in the other thread, if anyone wants to get in on my Hero Lab Online account I have all the Starfinder content needed to make up characters to play around with ideas. Hit me up if you want an invite. Hero Lab Online is browser based and you can get the free version to join my setup.

I’m not playing the muscle this time.

I dunno, I can’t think of anything from James Cameron that sounds like Fly Free or Die, I think you are just trying to get people to watch the Abyss again

I actually think the abyss is more the whole working class stiffs having to deal with escalating issues that are normally beyond their normal everyday experience. All without them doing anything to intentionally escalate it. It keeps being escalated due to things beyond their control. And they keep having to work around it.

But that is what I am interpretting it as. Plus you have water manipulating aliens…

Actually that is a good way to put it. I stand corrected.

Alien is a fantastic example of a working class starship crew! I would assume it was left out because the theme is more about horror.

Then again, maybe @Rando doesn’t want to tip us off to Special Order 937.

I might as well get this out of the way.

It’s not a drow AP but there are drow amongst the antagonists. A PC drow could be advantageous, it could also be disadvantageous. /shrug

oh yea, count me in.

Got it. Well I’m not sure that I can think of a credible reason why a Drow would be slumming it on a freighter. But it’s good to know what my options are.

I’ve got a couple of other ideas that might be better.

Well I’m not sure that I can think of a credible reason why a Drow would be slumming it on a freighter.

Ship interior lights are not as bright as sunlight? You’re tying to escape the sun without going underground?

Wait…they don’t have freaking sunglasses or the equivalent in super future space?

There’s Daywalker Serum which is a consumable that gets expensive.

I would assume that replacing your eyes with the appropriate augmentations would get rid of light blindness.

I would assume that the drow corps have created light blindness removal glasses that have a similar cost/level to Darksight Goggles.

WTF? How is my charming yet roguish skittermander smuggler scoundrel ace pilot supposed to look cool without sunglasses?