Avoiding cross-posting, thinking about doing circular tokens again 'cause of:

Haven’t done it yet but thinking about pulling the trigger on this 'cause I want to support more PF2/Foundry. It doesn’t really affect us 'cause a) we’re using those top-down tokens b) the NPCs/creatures in Abom Vaults Foundry Edition already have their own circular tokens made But in our future Hell’s Rebels game, I think we’ll switch back to the circular ones.

I spent a good part of this weekend struggling with the city from that other game world and looking through my back catalogue of apporiate 1E, 2E, and 3.XE source material whilst writing the player’s guide for the upcoming campaign. Of course youtube was up on monitor two and the talking heads were all going on about OGL this and ORC that.

So I have decided to back off on the Curse of the Crimson Throne conversion to that other game world 'cause I’d be using copyrighted and/or trademarked proper nouns for locations, NPCs, deities, etc, and I don’t want to do that. Also, it’s a shit-ton of work.

Option 2: Curse of the Crimson Throne

Given the pro’s and con’s listed, I would vote for Hell’s Rebels. I think the biggest Pro, at least from my own experience, is the re-usability of any work done. I know that DMing, especially when converting special/unique NPCs and Monsters from PF1 to PF2, can be a lot of work. If it were me, burnout from trying to run two completely different campaigns would be a much higher risk. Rando’s mileage may vary.

Also, it has a very strong “DOWN WITH THE MAN!” vibe that appeals to me, since, you know, that particular “man” is a bad guy. Viva la revolution!

Hell’s Rebels look good to me as well.

I’ll get that player’s guide addendum asap - for PF2 conversions of backgrounds and feats and such.

Updated OP with a link to the PF1 Hell’s Rebels Player’s Guide. All the lore bits are still relevant as is the info on the rebellion tracking system.

Updated OP with link to the Player’s Guide PF2 addendum. I made it like in 2020 and it might be a tad out of date since we’ve had more content (in the form of skill feats), but that’s what I came up with then.

In the 2020 version I had reworked the background traits of PF1 to add some pretty powerful bonuses for PF2, but those have been stripped out; y’all have a free archetype to compensate!

[Edit] Oh yeah, and we’re going to have to have a chat about the rebellion management system thingie.

is it to late to vote for star wars?

Alrighty! Given the changes to the potential campaign, and since Rando has re-confirmed the Free Dedication Feats optional rule, I’m leaning more towards playing a Cleric.

I’ll be squishy as all get out, but I’ll be a dedicated healer with a couple of those tasty Primal cantrips.
Plus maybe an animal companion later (riding doggo!).

Edit: Scratched out the Aasimar. No real reason for it other than flavor, and I decided I liked the character better without it.

I did not know we were getting a free dedication. that will change my character a little. Here is the basics so far

Race: Skilled Human
Background Street Urchin, though as soon as I see the adventure path backgrounds this may change
Class: Gunslinger + Swashbuckler Dedication

I wasn’t getting notifications on this thread for some reason so I missed out on this last bit. I spent a good portion of today sitting in the rain making various healer characters because nobody else was making one and I didn’t want anyone to feel forced into it… but if Ugly is playing a cleric I might go with a modified version of my Bard/Champion or Fighter/Druid. Or maybe a full caster… Kobold Sorcerer?

The biggest problem with the Fighter/Druid is that he really doesn’t come online until like 4th level and I feel like I’d be sponging off the party until then… but then I FEEL like he would turn into a crit machine.

The Bard Champion is a cool concept I just came up with today and have a few different variations of it. So far I like the Frilled Lizardfolk version the best. It’s mostly a buff/debuff character that is also a high AC damage sponge.

I need to go read that players guide.

As soon as… I mean if Atsu dies I’m doing Bard/Champion!

This is what the Lizardfolk version was looking like: 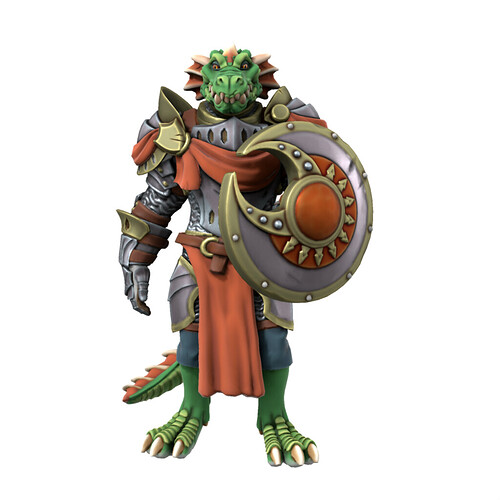 Made some changes to the gunslinger

I’ll be more of a Face person/Skill monkey with some ranged DPS. Though everything is subject to change depending what others make.

The character I’m planning on playing will be a face as well, but I get the feeling that this AP will make use of them plenty.

I’m fairly set on a Bard with the Champion dedication.

I know Grapper is out and we are doing a learn the new system game this week. I may not make it or could be late. I just found out about a work meeting that starts at 3:30est. Not sure how long it will run and the drive home is about 90 minutes. I’ll try and jump on though soon as I’m back if people are in discord.

I just did my Thursday Fantasy grounds update, guess that’s a waste of time this week

I’m working on Cantrip choices. Is someone taking Detect Magic and/or Read Aura?

I think I have access to all the divine cantrips, Daemoro, so I could take either one.