We’ll be running the Hell’s Rebels adventure path (converted from PF1 to PF2)!

The city of Kintargo has a new lord-mayor, but he’s not someone interested in maintaining that city’s free spirit. Paracount Barzillai Thrune has placed the city under martial law, and his cruel proclamations and sinister plans for the city bode ill. Can a small group of heroes and would-be rebels stand against the might of the Thrice-Damned House of Thrune and the Church of Asmodeus and save their home town from being crushed under the boot of an infernal tyrant? Will one of Cheliax’s most powerful inquisitors make the city his playground, or can the rebels known as the Silver Ravens rise up to bring a new era of freedom to the so called Silver City of Kintargo? Join the rebellion! Save Kintargo! DOWN WITH THRUNE!

Will be using Guild Discord for voice communication and Foundry as our virtual table top. Players connect to Foundry games (for free) via their Chromium-based browser of choice (Edge, Chrome, Brave, Opera, etc).

Session 0 - getting to know our way around in Foundry, party composition discussion and finalization, and character creation will be on TBD (dependent on when we finish the current module of Strength of Thousands)

Unlike the Saturday night group we won’t be using the Free Archetype variant rule. There’s five peeps in the party and I won’t be scaling most of the encounters. The initial stretch of what’s expected of the party to get from level 1 to level 2 without a long rest is insane!

Are you sure you didn’t mean no free archetype except for @Daemoro ?

@Grapper should get to play whatever she wants since she has run sooooo many games.

I will play whatever is left over TBH… once I convice @Rando to give me the Free Archetype.

OK. The only thing Free Archetype does is give you more options and flexibility. The tightness of the PF2 system limits character power by action economy and limited stacking. The one exception I can think of is a Magus getting more spells from a free spellcasting class… which only works if said magus can roll double digits on a d20.

DUAL classing increases power somewhat… you could give me that optional rule instead.

Another great part of the free archetype is that I get to make exponentially more character variants in my free time… or when I should be working.

Another great part of the free archetype is that I get to make exponentially more character variants in my free time… or when I should be working.

So the trailer gives a pretty (bad?) impression that this is some sort of rootin-tootin western thing. It’s not really. It’s a PF2 fantasy adventure and replace some of the typical undead/golems with clockworks and some of the bad guys will be shooting guns instead of bows at y’all.

I wanna reiterate that yes the party are outlaws but are still definitely the good guys. Y’all were declared outlaws by the bad guys and didn’t necessarily deserve it. You were not important enough to run out of town or to try and track down and have killed, but annoying enough to have you declared outlaws which would force you to keep your heads down and stop mucking around in the bad guys’ business.

this is why i like free archtype as well. more variation in my character more options more…random character ideas in my notes…

Now I just need to convince everyone to play characters that need negative healing for a “theme” party!

I’ve been playing around with builds. The one I like the most so far is a Halfling Killer Clown (Rogue)

That sounds awesome… but what about Halfling Dhamphir Killer Clown!!! 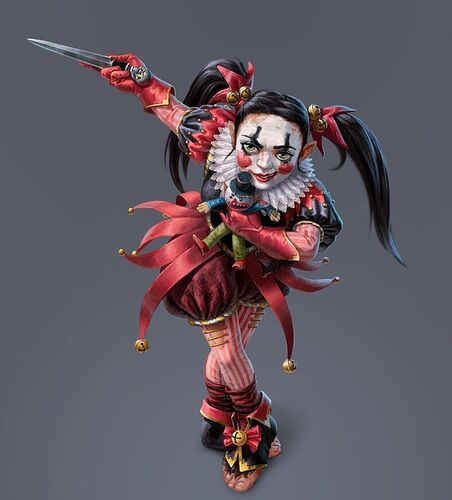 Forgot to mention, we’ve been using top-down tokens (of which I have a bajillion) along with a module that does token facing/rotating. Yes, there is no such thing as token facing in PF2, but it looks cool.

Unfortunately the tokens are selected server side and I have to pick for y’all… Unless you get yourself a top-down token someplace that you want me to use, then post/send it as usual.

Y’all can use whatever art for your character that you want and that piece will still show up on the character sheet and will show up as an image pop-up in the bottom left corner of the screen when someone mouses over the character’s token in game - thanks to another module. You might want to alpha/delete out backgrounds of said character art then. 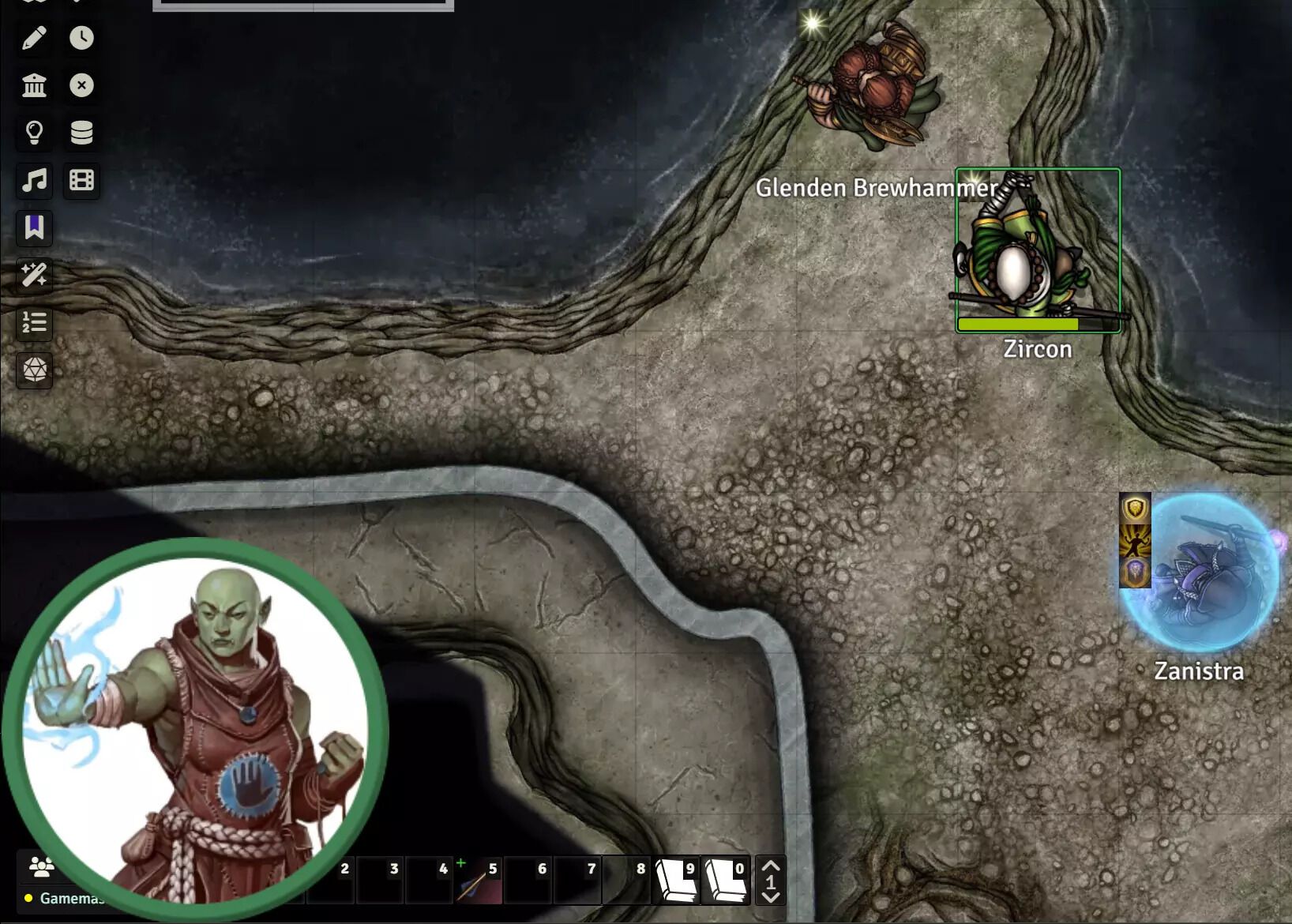 Above we have Glenden Brewhammer (dwarf champion), Zircon - Assistant Manager (half-orc monk), and Zanistra (drow elf wizard) facing off against… something. Mousing over Zircon’s top-down token shows us the pop-up art from Zircon’s character sheet (in this case, the original round token we were using before switching to top-down tokens) in the bottom corner of the screen.

Indeed, I was thinking Psychic Sprite. How does the Foundry do with majorly undersized characters, Rando? Sprites are tiny, and have to occupy the space of their target if they want to melee attack (not that I’d want to, I’m just pointing it out).

Token sizing/scale works (generally) better than in FG. Shouldn’t be a problem. There’s a handy-dandy z-axis token make-me-on-top key (at least for the GMs, not sure about players) that let’s you cycle through stacked tokens to pick the one(s) you want.

Does Foundry not have 3D tokens? I thought they did.

I was bored so I worked on this while watching football.

If there IS a 3D option… 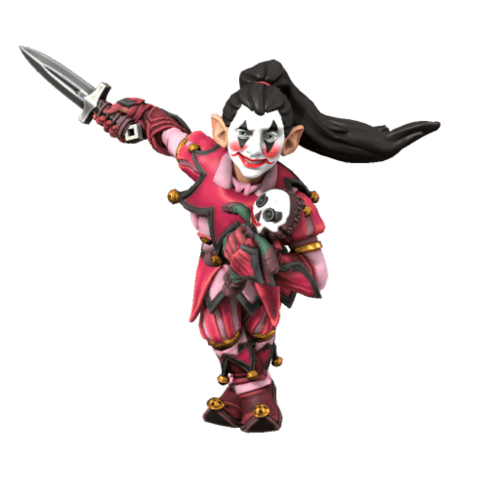 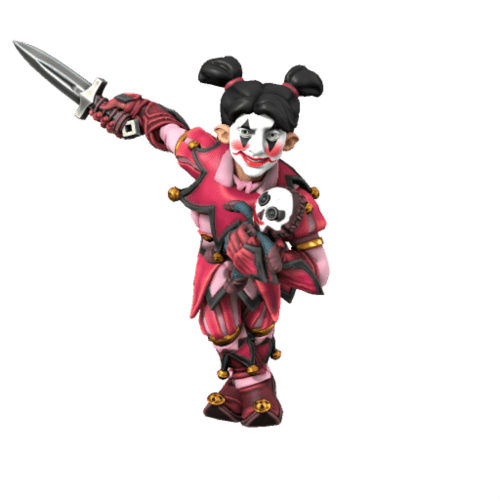